A potential border poll has been the focus of the leader of one of Northern Ireland's two largest parties during this election campaign.

It has been mentioned in virtually every one of their statements, and woven into answers to the media about a range of issues, from the need for urgent reform of the health service to the cost of living crisis and the Northern Ireland Protocol.

The person in question is not Sinn Féin's leader north of the border Michelle O'Neill, but DUP leader Jeffrey Donaldson.

The message was stark in a headline on an article by the DUP leader in Belfast's unionist daily newspaper The News Letter on Friday.

"If SF win, they'll demand a date for a border poll" it read.

In the article, Mr Donaldson stated: "They will not admit it but there are plenty of republicans who believe that the election is as good as in the bag and that their day has come."

He added: "Make no mistake, if Sinn Féin win this election, they will not be talking about fixing our health service, training more GPs or delivering 30 hours free childcare they will be talking about a date for a divisive border poll." 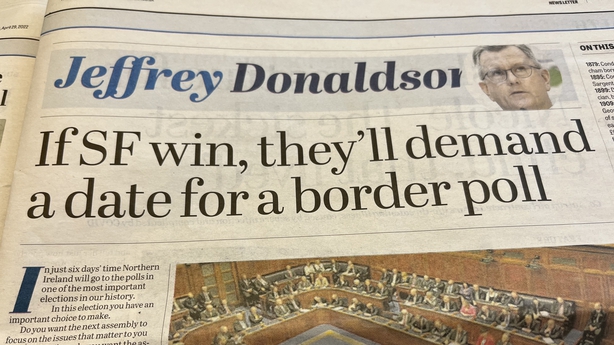 DUP election candidates have also been pushing a similar message ahead of polling on 5 May.

Speaking on the BBC's Newsnight programme on Thursday, Peter Weir, a former Stormont Education Minister and candidate in Strangford, suggested Sinn Féin had diluted talk of a border poll during campaigning.

He suggested it was because the party didn't want to "scare the horses", but warned the issue would be a priority if it emerges as the largest party.

A referendum on Irish unity is a policy objective in Sinn Féin's election manifesto, appearing on page 9, after the cost of living crisis and health, but before the economy, housing and education.

One of the stated priorities is "securing a date from the Irish and British governments for the referenda on unity provided for in the Good Friday Agreement."

If the leader of the DUP team finishes runner-up, he would be the first leader of unionism to do so in the history of Northern Ireland.

To the surprise of many political commentators - and it would appear the DUP - it has not been front and centre in the party's campaigning.

Time and again Michelle O'Neill and other senior party figures have listed the health service and tackling the cost of living crisis as the main issues.

Taoiseach Micheál Martin, Tánaiste Leo Varadkar, Minister for Foreign Affairs Simon Coveney and the leaders of all of the other Stormont parties have repeatedly said that setting a date for a border poll in the short term could be hugely divisive and destabilising.

Sinn Féin disagrees, but it has boxed clever on the issue during this campaign, avoiding giving the DUP and other opponents a crocodile moment.

It was in Lurgan in Co Armagh in February 2017, just weeks before the last Stormont Assembly election, that the then DUP leader Arlene Foster spoke out against an Irish language act, adding that: "If you feed a crocodile, it will keep coming back for more."

The comment outraged nationalists and was a monumental political mistake. Sinn Féin couldn't believe its luck as the anger helped galvanise its support and acted as an incentive for people to vote, including many who had previously not backed the party at the polls.

Less than a month later - when the votes were counted - it helped Sinn Féin secure 27.9% of first preferences and 27 seats in the Assembly, just behind the DUP on 28.1% and 28 seats.

The party's strategists know that hardline statements suggesting a drive towards a poll for Irish unity was the priority after this election would have a similar impact: nothing would motivate unionists and loyalists more than talk of a possible united Ireland around the corner.

Likewise, Michelle O'Neill has not spoken overtly about a desire to be the first nationalist First Minister.

The reality is that while the titles may suggest a senior and junior role, First and Deputy First Minister are joint heads of government. They exercise the powers of the Executive office together and one cannot exist without the other.

But there is huge symbolism in the title as no nationalist has ever been officially ascribed the title of 'First' in a system of government dominated by unionism since Northern Ireland was created just over a century ago. There have been unionist prime ministers and unionist First Ministers, but never a Catholic, nationalist head of government.

Sinn Féin's election manifesto slogan, "Time for real change", alludes to a desire for a change in that historic political order, but does not spell it out.

Instead, in its public pronouncements the party has kept the focus on health and the cost of living as it attempts to make itself as transfer friendly as possible.

The Single Transferable Vote system used in the Assembly election enables voters to rank parties in order of preference and their lower preferences come into play once their top choice is elected or eliminated.

The system means that Sinn Féin could win most first preferences but not most seats, as transfers could help opponents.

There could be a scenario where Sinn Féin is the top party in terms of votes, but the DUP remains top in terms of seats.

It is the party with most seats that nominates a First Minister, so if the position of head of government in Northern Ireland is to be held by a nationalist for the first time, Sinn Féin will need transfers.

If it is a score draw and the parties are tied on the number of seats won, the party with the most first preferences gets the right to appoint the First Minister.

The Alliance could be the big winners in terms of added votes and seats.

As well as carefully managing transfers between its own candidates, the party knows it needs to attract as many as possible from the SDLP and the growing number of voters who are non aligned and don't described themselves as either nationalist or unionist.

Asked at its manifesto launch in Belfast last week to set out the desired timescale for a border poll, party president Mary Lou McDonald spoke of "a decade of change", but did not specify a timeframe: no crocodile to scare unionist horses.

It's likely to be a different story on the doorsteps in republican areas where traditional Sinn Féin voters will be assured that the party's commitment to a border poll remains as strong as ever, but those words will not be heard by the unionist voters the DUP hopes to galvanise.

The growing expectation that Sinn Féin is likely to emerge as the largest party when votes are counted piles huge pressure on Michelle O'Neill and Jeffrey Donaldson.

If the leader of the DUP team finishes runner-up, he would be the first leader of unionism to do so in the history of Northern Ireland.

In a party that's clearly been seriously fractured since the coup that led to the ousting of former leader Arlene Foster last year, that could lead to serious recriminations, a widening of the cracks and questions about his position.

Michelle O'Neill has a different kind of pressure to contend with as a series of opinion polls, virtually all political commentators north of the border and the bookies make her team the clear favourites.

A failure to deliver the prize would undoubtedly lead to questions about the election campaign and her leadership of it.

Last time around, the SDLP finished third in terms of seats won with 12.

In what has been described as a potentially historic and seismic election, the campaign itself has been surprisingly dull.

A number of its seats are viewed as vulnerable, but leader Colum Eastwood will hope it can pick up a number of targeted gains to offset any losses.

It won 10 seats last time around and he will hope his more liberal brand, including opposition to anti-Protocol rallies by other unionists and loyalists, will attract more votes.

His first battle is in his own constituency of Upper Bann where he faces opposition from more hardline unionists as well as a strong Alliance candidate.

Of all the party leaders in Northern Ireland, Naomi Long appears to be one facing least pressure with questions focused on how many new seats her party will win.

While Sinn Féin and the DUP focus on holding what they have and minimising losses, the Alliance could be the big winners in terms of added votes and seats.

The Green Party leader in Northern Ireland Clare Bailey will expect it to hold its two seats, including her own in South Belfast, and to possibly make a gain.

Jim Allister, the leader and sole Assembly representative of the Traditional Unionist Voice, is aiming to turn his hardline opposition into votes and seats.

He is on the record as saying that the party returning after this election with just one seat would be a failure.

The consensus is that there has never a better time for it to make a breakthrough and give him company on the Stormont benches.

In what has been described as a potentially historic and seismic election, the campaign itself has been surprisingly dull.

History could be made. Or narrowly repeated.