Borrowing some observations from the musical, Hamilton, 'It's Quiet Uptown' as we deal with The Unimaginable.

This is the pattern the world over as we try to cope with the calamity of our times.

Our little island, off the coast of mainland Europe, is currently a case of contrasting stories.

South of the border a three-party coalition, formed nine months ago, with two once bitter rival factions at the helm, is binding tight. But it is under fire from a dispirited general public for its handling of the Covid-19 pandemic.

In Northern Ireland, 15 months after devolved government was restored following three years in mothballs, the power-sharing Executive is struggling. But, unlike the South, there is a very real sense that the worst of the virus nightmare has passed. Every day optimism takes a few more baby steps.

Vaccine availability and roll-out are the factors shaping the different moods, north and south.

More than half a million people in Northern Ireland have received their first dose. That's over one third of the adult population. Those aged 60-64 can now book their vaccine appointment online. Last Thursday my turn came in a GP practice on Belfast's Ormeau Road. Recipients were directed through the red brick building like clockwork. Ireland being Ireland, the nurse delivering the AstraZeneca jab has family in Cavan and Leitrim. A small reminder card was provided, detailing the scheduled May date for a second injection. In a process of no more than three minutes, spring replaced bleak winter.

Boris Johnson's gamble is a game changer. Yes, the British Prime Minister coveted his neighbours' vaccines.  Yes, he maxed out on the UK credit card. But in a complex country with some of the world’s worst Covid-19 infection and death rates, he has managed to conjure up hope.

Ireland's turn will come. The European Union is too wealthy, too influential, too able a world power to fail. The European Commission's acquisition of vaccines will improve. Necessity, driven by public pressure, will insist on efficiency of the distribution networks in every member state.

And once the supply and management chains are tweaked, citizens of the Republic will start to believe that the worst of the crisis really is over. 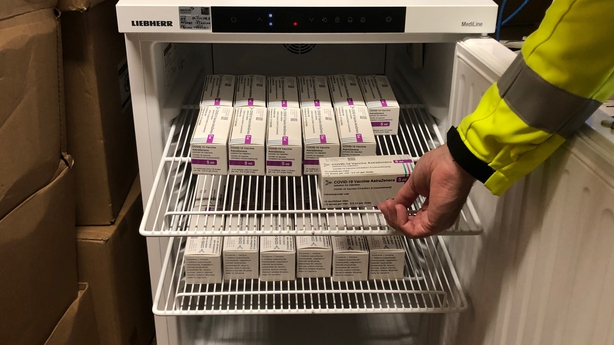 As recently as last December, Northern Ireland was struggling while its more cautious next-door neighbour
was more effective in combatting the spread of the virus.

On one RTÉ Nine News television bulletin, we showed scenes of revelry in crowded Belfast city centre bars while pubs and restaurants south of the border were in lockdown. Northern Ireland acquired virus incidence rates to match the lax controls.

Now the positive momentum is in Northern Ireland and throughout the UK, driven by the faster and more extensive vaccine roll-out programmes.

The optimism taking root in Northern Ireland was confirmed in the five-point plan Stormont's power-sharing administration announced yesterday. It has a system of rolling reviews, every four weeks from 18 March. Always, the emphasis will be on keeping the R rate below one.

No set in stone date-linked commitments have been made, but the clear intention is to have Covid wilting by summer. 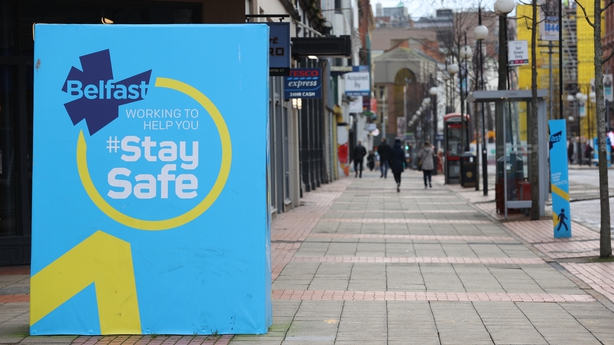 There is one potential advantage for the Micheál Martin-led administration in being second best. Boris Johnson hopes to lift all Covid-19 related restrictions in England by 21 June. He holds out the promise of re-opened shops, theatres, cinemas, stadiums and nightclubs by then.

Unless a scientist discovers a formula to convert tap water into vaccine, the Republic of Ireland will be significantly behind the UK roll-out programme, Northern Ireland included.

But the gap may provide the Taoiseach and his colleagues with the opportunity to stand back and assess the consequences, negative ones included, of Boris Johnson ploughing full steam ahead into the lifting of all restrictions.

The malfunctioning politics of Stormont deserve consideration. The deep-rooted problem is post-Brexit realities have created a crisis within unionism about its identity and its future.

Southerners may remember a long ago frustration when a Hotspur or Bunty comic arrived to the local newsagent, without the free gift advertised on ITV. Currently in Northern Ireland it's a deeper form of let-down; since Brexit, some goods from Great Britain have become significantly more expensive or are no longer available. 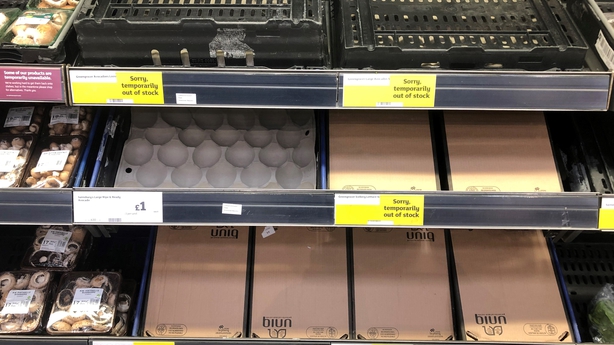 The potential problem solvers are the two main players in the Brexit agreement – the EU and the UK. Boris Johnson has installed his former chief Brexit negotiator David Frost in place of Michael Gove to interact with European Commission Vice President Maroš Šefčovič .

If they are minded to address impractical, unnecessary and unpopular measures affecting the flow of goods into Northern Ireland, they could go some way to diffusing the 'border down the Irish Sea' row. If unionists decide their best strategy is to demand the impossible, the instability will continue.

It is not inconceivable that the growing discord and dysfunction within the Executive could lead to the collapse of power-sharing in this calendar year, the centenary of the foundation of Northern Ireland.

British Cabinet Office Minister Michael Gove seemed intent on finding some useful solutions to the Northern Ireland Protocol issues with the European Commission. But Gove is now off the pitch, as decided by Boris. His successor, David Frost, has become the key. Lord Bellwether. Troublemaker or Peacemaker? Watch this space.

As Dublin's three-party coalition seeks an escape route from the pandemic nightmare, mistakes occur. Low-hanging fruit invariably emerges. Uncertain times make for easy pickings. For very valid reasons, in the attritional arena that is politics, the spotlight falls on the here and now.

But is there merit in reflecting on one of the consequences of the nightmare we did not expect or want? It is a factor that could have long term significance for our future as a Shared Island or a United Ireland.

Only a very small portion of Northern Ireland's citizens - well below 5% - have private health insurance. For generations they put their faith in the National Health Service, with its principle of care for all, based on need and free.

South of the border, up to 50% of the population opts to take out private health insurance rather than rely on the public system.

The contrast in traditions and system on the different sides of the border is striking.

The pandemic emergency has forced temporary change in how the South's health system operates. Covid-19 does not come in different forms for public and private patients. Every person presenting to a GP or hospital receives the same level of care. At admission stage or in hospital wards patients are not asked if they have private insurance. 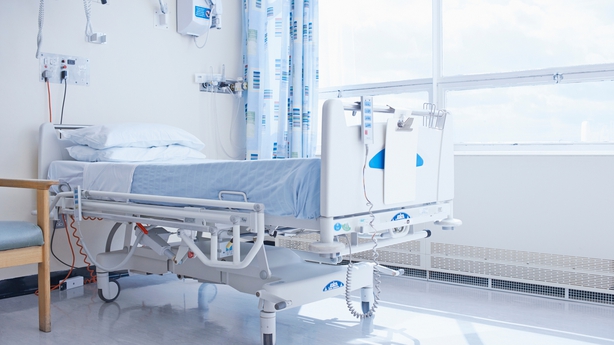 In the worst part of the emergency, such was the level of focus required to preserve life and to prevent the collapse of the health system, there wasn't the thinking space to imagine appropriate use for the private hospital facilities, rented by the State.

The vaccine currently being rolled out to citizens on both sides of the border is free. Private health insurance secures no advantage.

One of Northern Ireland's assets as it rolls out its vaccine programme is the quality of information at its disposal. The vast majority of citizens are known and contactable. It is logical to register in a structure which provides free GP services, free medicines and free hospital care.

South of the border, up to now, there was no comparable structure, partly due to the public-private health care mix. But the vaccine roll-out programme, including the required investment in information technology, provides a chance to establish an integrated data base with significant potential for a future health service.

Death and Taxes are indeed two of life's great certainties. A third one, an Irish one, briefly reminded us of its existence last week. It was the announcement of an increase in private health insurance premiums "to cover the cost of providing quality healthcare to customers in 2020 and beyond..."

It could well be that if/when we do manage to emerge from the virus nightmare, Ireland's public/private healthcare hybrid will resume as before.

True, there is a masterplan called Sláintecare. But the nuanced extension of the public health system reach is proceeding at a pace that suggests a journey that will continue long beyond its aspirational 2028 completion date.

An alternative and more radical view is that Covid-19 could act as an accelerant of change.

The system, working at full tilt for the past year, has no tiers. Its sole focus is to protect the population from a vicious virus that doesn't discriminate between public and private patients.

Are those of us who have private insurance up for the challenge of instead diverting our premiums into a State system, working on principles of access based on need and a quality service free at the point of delivery?

Is the State capable of building a structure to effectively deliver such a system?

Is there a critical mass of clinicians who would be willing to settle for the equivalent of a Taoiseach's salary and who would commit to working exclusively for such a State system, with the very real prospect of more colleagues in a more satisfying workplace and a better work-life balance?

It is 20 years since Maev-Ann Wren won a national award for her Irish Times series on Ireland's health system. Her subsequent body of significant work with the ESRI and the esprit de corps of health care personnel in the Covid trenches aspire to an Irish health service significantly closer to Berlin than Boston.

Not just unionists but most northerners are wedded to the National Health Service model pioneered by Britain after World War II, before the birth of what has became the European Union.

The pandemic has reinforced the profound importance of how a health service is structured and delivered.