Today's announcement by the Government definitively closes the door on the prospect of Supreme Court judge Seamus Woulfe being removed from office by the Oireachtas.

And it lobs the problem back to the Four Courts, where the standoff must now be resolved.

There is now near consensus within both the Government and the Opposition that issues raised by his attendance at the infamous golf dinner in Clifden during the summer and his handling of the matter, do not come anywhere near the stated misbehaviour level specified in the Constitution.

It remains possible for any TD or Senator to table an impeachment motion but it would certainly fail.

Rise TD Paul Murphy has said his party and People Before Profit have not ruled that out, but would only do so if it was likely to succeed.

The informal resolution process initiated by the Supreme Court currently stands and Mr Woulfe will be suspended without pay until February.

It's understood that it is not the view of the court that he should face an impeachment process and that there is a difference between matters that might lead someone to resign in the interests of the court and a matter that would justify impeachment.

It's also thought that resignations from the Supreme Court are unlikely. 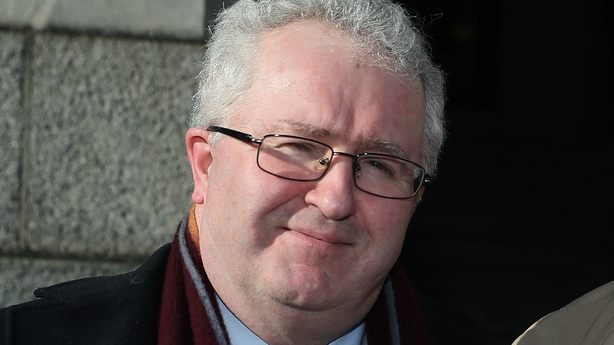 The view in Leinster House is that the Chief Justice Frank Clarke and Mr Woulfe (above) will have to resolve their differences and get on with working together.

Mediation has also been mentioned.

On the political side, the spotlight has moved on to how judges are appointed and the role of political patronage in a process that is opaque.

In this instance, Seamus Woulfe came through the vetting of the independent Judicial Appointments Advisory Board (JAAB) which passes on applications from suitably qualified barristers and solicitors.

However it has emerged that at least three senior judges also expressed an interest. Those expressions of interest were made directly to Government rather than through the JAAB.

The Government has insisted that it is standard procedure for only one name to be brought to Cabinet, as happened here.

But what seems particularly unusual is that the other coalition leaders Micheál Martin and Eamon Ryan say they did not know about the other applications.

Opposition TDs remain of the view that Justice Minister Helen McEntee should answer questions in the Dáil on the appointment process.

She spoke briefly today to say she adhered to the process by considering both the JAAB recommendation and other expressions of interest.

She said she then spoke to the Taoiseach, the Tánaiste and the Green Party leader and "on foot of that, a recommendation and a name was given to Cabinet".

What she didn't address is why Micheál Martin and Eamon Ryan were not brought into the loop about the other applications.

The Taoiseach has said he was told during the government formation process that the name of then Attorney General Seamus Woulfe had come through JAAB.

Sinn Féin, the Social Democrats, Labour and several independents have lined up to demand more answers.

The Government has repeatedly clung to the defence that it would be inappropriate for the Justice Minister to answer questions on this.

However, the Ceann Comhairle Seán Ó Fearghaíl made an important intervention today to the effect that the process could be discussed but not the individual.

So it seems likely that this will be ventilated further in the Dáil chamber.

Not all ViraPro product accounted for - Dept

NPHET meeting moved to Wednesday ahead of Level 5 exit