One of Donald Trump's greatest skills is marketing. He is a master at selling his message and a master of the catchy election slogan.

'Make America Great Again' helped him to win the White House back in 2016. 'Keep America Great' was supposed to be the catchphrase that would keep him in the Oval Office.

The words are emblazoned across merchandise for sale on the Trump campaign website and it is not just the traditional hats, mugs and t-shirts. Trump dog leads, cufflinks and bath towels can also be purchased.

'Keep America Great' made sense. It inferred that the job of securing a booming economy had been successful and the task was to maintain that growth.

The problem now of course is that the US economy has been decimated by the coronavirus outbreak. Also decimated, are Donald Trump's hopes of campaigning on a booming stock market and record low unemployment figures. 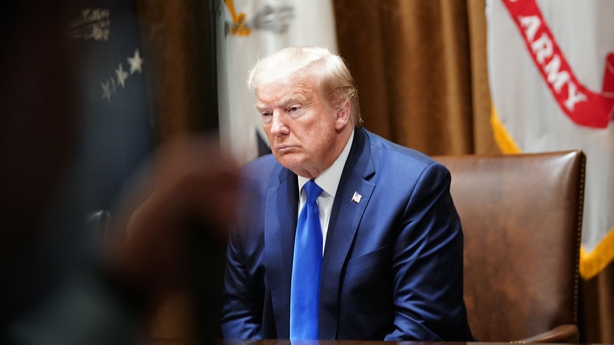 The scale and speed of job losses in the US is unprecedented.

20.5 million jobs were lost in the month of April bringing the unemployment rate in America to 14.7 per cent.

Not since the Great Depression has the jobless picture in the US been so bleak and it is piling further pressure on states to reopen their economies.

By this weekend, coronavirus restrictions will have been eased in around 45 of the 50 US states.

Medical experts are warning that it may be too soon and it seems a lot of Americans agree.

According to a new survey from the Pew Research Centre, 68% of people say they are worried that state governments will lift coronavirus-related restrictions too quickly.

Just 31% were concerned that states will not lift restrictions quickly enough.

Donald Trump described the latest unemployment figures as "totally expected" and "no surprise".

He also vowed to return the US economy to prosperity.

'Transition to Greatness' isn't as catchy as previous slogans and it won’t fit as neatly on a dog lead or baseball hat.

If it works, Mr Trump will secure four more years in the White House.

If it fails, the only transition he will be dealing with will be a transition to a new presidency.