In the darkness of the coronavirus crisis, most people are doing their best, in the worst of times.

Some can work, while others wait to see if their jobs will ever return.

Daily chores can seem a bigger chore than ever before.

Even the basics of life, sleeping and eating can prove difficult, in this new, topsy-turvy world.

There is some good news with the virus under some limited control here, for now.

The rate of infection is reduced and admissions to ICU are down.

It's the actions of citizens that have brought Ireland to this precious position.

This is an astonishing feat, not to be easily squandered.

There has also been great sadness for all families who have suffered the loss of loved ones, whether that has been in hospital, in the community or at home.

Today, let’s remember all those who have died at this time, from whatever cause and the circumstances under which funerals must be held.

Each loss is personal and also a void in our collective.

Remember too that our individual survival through this dark period is inexorably bound to the success of our people, as a whole.

We are in this together and we grieve for others together.

Today, with coronavirus, Ireland is something of a tale of two countries. 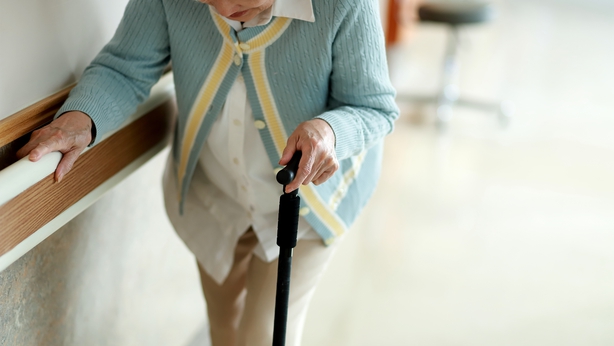 This is despite the heroic efforts of health staff there, in the midst of unprecedented challenges, including having to battle to get personal protective equipment.

In late February, when Covid-19 had not yet officially arrived here, the Government and health officials had to make what were in effect, war plans.

Those plans were based on the experience of the coronavirus at that time in other countries - China first and then the parts of Europe where it first struck, with devastating impact, as in northern Italy.

Our plans were also devised on the basis of what was known about this new virus, as well as how pandemics of the past were defeated, or at least laid low.

But Ireland had more time to prepare, more than many other countries, which have seen devastating levels of infection.

Being an island nation, may have also helped us somewhat.

There are some countries that appear to have acted slowly, left themselves unprepared and are now paying the awful price.

We must learn from those images too.

So it is like facing into battle against an army general with a battalion of unknown strength and capabilities.

And as in all wars, there are shifting frontlines, defeats and victories too, big and small.

Here hospital defences were strengthened by ensuring there were enough beds and staff.

That work by the HSE was successful and we now have around 2,000 vacant public beds, plus critical care beds and sufficient staff, to meet the current demand and further pressures.

Physical armoury in the form of personal protective equipment was also a priority, although some areas experienced serious shortages or the equipment they got was unsuitable. 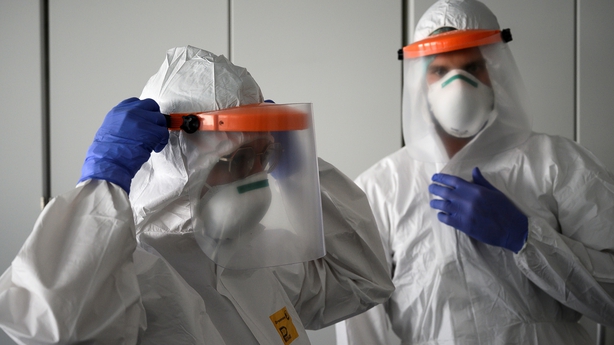 Keeping supply lines open in wartime is an ongoing challenge.

Despite setbacks, testing was also a first line of defence, to identify the viral enemy threat in the community, as early as possible.

Here too there were some big gaps.

There was a morale-sapping element to the test delays and I know of some patients who never got their results.

But the backlog is cleared and hopefully testing will be expanded with a rapid results system soon, as part of the key to unlock some restrictions.

The one key area of special vulnerability has been nursing homes and there are major questions over the preparatory defences here.

We must take into account the sad reality that 90% of all deaths from the virus, are among those over 65 years, so this is an extremely vulnerable group.

It is also the group that are most affected during the influenza season in terms of mortality.

There have been over 160 Covid-19 outbreaks in nursing homes - no other facilities have seen so many clusters.

To date, around 62% of all Covid-19 related deaths have been in nursing homes.

And there were warnings in advance.

Last week, in my column here, I set out the timeline and documentation of communications between Nursing Homes Ireland (NHI) and the Department of Health, on the concerns among nursing homes for residents and staff.

The first of those communications to the Department of Health by NHI was the end of February, around the same time as the first confirmed Covid-19 case emerged here in the Republic of Ireland.

It would be 4 April before a specific agreement of measures between the State and these homes was announced. Up to yesterday, some nursing homes were still expressing concern at not having yet been provided with all the supports promised.

Health officials say they did engage with this vulnerable sector early on and that it was late into March, before individual homes raised specific issues.

The spotlight is now most assuredly on nursing homes and there are some very distressing stories about the scale of loss in individual homes.

In recent days, further measures were promised to aid nursing homes and there is to be a national study from the HSE on the scale of coronavirus in community residential facilities, including mental health and disability services. 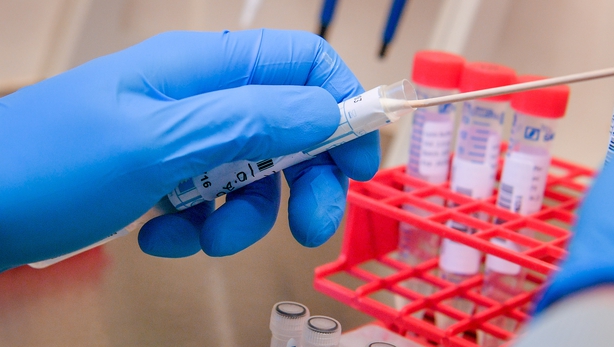 Over 300 of all deaths have been in community facilities.

Of those, over 250 have been in nursing homes.

There have been major challenges in dealing with coronavirus cases in hospitals, and sadly hundreds of patients have died, many with an underlying illness.

Over 280 people with Covid-19 have been admitted to Intensive Care Units.

The positive news is that over 77 have been discharged, which is encouraging.

We can see that the impact in the residential homes of the most vulnerable has been greatest.

The entire hospital system in Ireland is also in unfamiliar territory.

Under a voluntary agreement reached last week, with various unions, re-enforcements of public health workers are being sent into nursing homes to help with the effort.

While very welcome, some may ask if it is coming a little late into the crisis?

For this crisis, our public hospitals are reasonably staffed, have plenty of empty beds and have been waiting for the surge, which may, or may not come. That’s not their fault.

The deal to take over private hospitals was a necessary precaution but their services have not yet been required in any significant way.

Who was to know that? It could have been very different. That situation could also change in the coming weeks, or months if re-infection rates were to rise sharply.

Nothing is certain with this virus.

Some may ask if it would have been better for the State to have also taken over the private nursing homes temporarily, in the same way they did with private hospitals, as a precaution.

To protect those most vulnerable, very early on.

In fairness, this has been uncharted territory, even for the most experienced of health officials and these are questions to be pondered at another time, not while we are in a state of emergency.

The decision to take over private hospitals has also resulted in unintended consequences. The SláinteCare plan envisaged that to happen over many years, not overnight.

So it has caused problems and complex knock-on effects too.

A group of around 600 private-only consultants have issues with the proposed temporary contracts being suggested by the State, under which they would do public work.

While some procedures may be taking place in private facilities, several million people cannot avail generally of their private health cover at this time. They are in a kind of lockdown too.

All hospitals are effectively now public facilities, on a temporary basis.

The overall result of these changes will be very long public and private waiting lists, especially if this goes on for a long period.

During the past week, I was given details concerning a private patient awaiting cancer surgery.

The patient needs to be operated on soon but there is a delay because of the current situation.

There must be many other people in this uncertain position, wondering when they can be seen at a clinic, or have an important time-sensitive procedure.

It sparks the question about what provision was made for all private patients, who need procedures or appointments, to be looked after during the crisis, so that they have continuing care?

The temporary rebates of subscription costs by private health insurers will be a welcome financial relief to many, no doubt.

But it will not provide relief to those suffering from chronic pain, or other conditions that can not be assessed or treated at this time and for whom a deterioration of their illness must be a real fear.

Also the number of people - as yet unquantified - who are staying away from hospitals, with conditions that should be seen now, is a real concern. 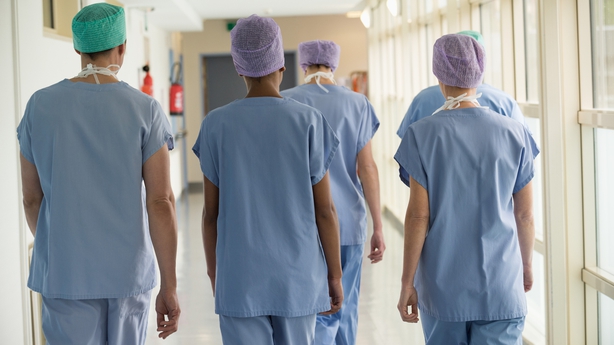 Emergency departments have never been quieter, with most hospitals reporting no patients waiting on trolleys.

There will be a price to pay for some who are understandably reluctant to attend hospitals, even for emergency care.

That price could be fatal.

Everyone should be aware that the doctors, nurses and beds are there, via emergency departments, for people who feel ill at this time, with any non-Covid-19 conditions.

Efforts must be made to avoid all deaths, no matter what the illness, where that is possible.

Coronavirus is a living organism, hiding in plain sight, with a will to survive, through each human host.

It’s a ruthless enemy, not encountered before. And it likes close encounters.

This battle with Covid-19 is at an uncertain stage.

As with all wars, there will be wins and losses.

Ireland has seen much success in reducing the spread of Covid-19 so far.

The country has not been overrun and the casualty numbers predicted in early figures, have not come to pass.

It makes the decision on relaxing measures and lifting defences an unenviable one.

Coronavirus may easily open up another attack front in Ireland, or even return for a second wave of assault.

Some people are weary, lonely and distressed and looking for a pathway out of the 'lockdown'.

It's human nature and understandable.

There will be calls for an early lifting of measures and some easing may be possible.

But we should remember the tale of the Pied Piper of Hamelin, who came to help in a different plague.

The retreat of Irish people to their homes and the sacrifices made was no surrender.

It has bought valuable time against a great enemy.

There are signs of hope in the latest figures for Covid-19 and in the news, that the collective efforts of people have saved many lives.

It’s something to be proud of, while we also mourn the loss.

Much has been asked of people and yet more is required.

There is no manual for dealing with the novel coronavirus.

We don’t know how it ends.

That book is still being written.