The two largest parties are neck and neck in the polls. Neither will do business with an emerging third force they accuse of harbouring dangerous anti-state instincts.

Israel is headed for deadlock as a majority coalition seems unlikely. Voters may have to return to the ballot boxes within months.

It may all sound dismally familiar to Irish voters, but spare a thought for the Israeli electorate.

Tomorrow this is what they are facing for the third time in under a year. Already, there is even resigned talk of a potential fourth poll should the seat count mirror the opinion polls.

Last April and again in September Benjamin 'Bibi' Netanyahu, the prime minister and leader of the right-wing Likud party faced off against Benny Gantz, a newcomer to politics. He was previously chief of staff of the Israeli defence forces and now leads Kahol Lavan, the Blue and White party.

The main dividing line in the election is not policy platforms or ideological sparring. It is the character and suitability for high office of Benjamin Netanyahu.

He faces indictment on counts of bribery, fraud and breach of trust - the first Israeli prime minister to face such charges while in office. The April and September elections were described as referendums on Mr Netanyahu.

Will the same apply on 2 March?

"To a greater extent than ever before," according to Anshel Pfeffer, journalist with the Israeli daily Haaretz and author of 'Bibi - The Turbulent Life and Times of Benjamin Netanyahu'.

There was a dead heat at 35 seats each in April’s vote. Blue and White party pipped Likud by one seat last time out, which saw them finish with 33 and 32 seats respectively. But that is far short of the prized 61 seats needed for a majority in the 120 seat parliament, the Knesset. 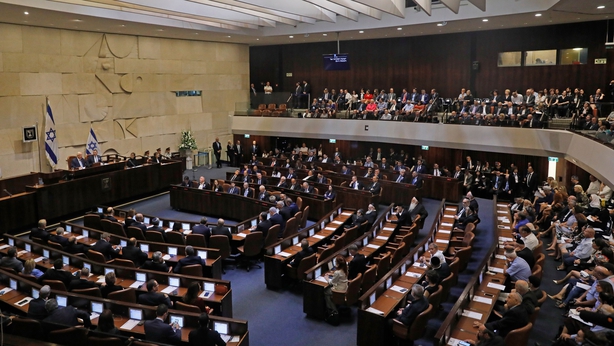 In a distant third place came the Arab Joint List, which saw a surge to 13 seats after a spike in turnout among Arab citizens, many of whom describe themselves as Palestinian citizens of Israel. Likud has accused them of disloyalty. Blue and White has denied it would coalesce with them.

"Unless the polls are wrong and we see a surge to either side in the actual result, right now it looks like a very similar outcome - we’ve still got the country split down the middle.The small majority of anti-Netanyahu can't get together because there's a wide range of views that can't really sit down together in the same government", says Mr Pfeffer.

But having seen off a leadership challenge with an overwhelming majority in December, Mr Netanyahu is not for budging.

Professor Reuven Hazan of the Hebrew University of Jerusalem’s Political Science Department believes party loyalty, rather than love of Bibi, will sway many on the right.

"Unlike in Ireland where you have names of politicians on the ballot, in Israel we only have the names of the parties," explains Prof Hazan.

"So, there are right wing and Likud voters, who truly believe in the party and its ideology but are sick and tired of the leader and they have no choice.

"So, they will reluctantly continue to vote for Likud, hoping that the party can move beyond the personal issues of this person. So, it is a referendum [on Netanyahu], but the electoral system in Israel makes it a little bit less of a referendum," he says.

Another ingredient in the deadlock is the role of the party backed largely by Israel's 1.3 million Russian-speaking citizens, the secular Yisrael Beiteinu.

With eight valuable seats, it is headed by former defence minister Avigdor Lieberman. He will not enter a coalition with Likud while Netanyahu is leader.

His drive for greater secularisation would also make him a mutually unacceptable bedfellow for Likud's allies on the religious right. He is also vociferous in attacking the Arab Joint List.

Anshel Pfeffer believes that Mr Lieberman's personal ambition also plays a large role in the party’s stance: "Lieberman's main issue is that he knows he's never going to be prime minister. He'll never command one of the big parties, but he'd like to be the number two fella and he was the defence minister in Netanyahu's last government.

"But I think he realised that the main decisions are always going to be made by Netanyahu and he's never going [to] get the kind of power he likes under a Netanyahu administration because Netanyahu's so omnipotent now.

"I think that’s why he's interested in having a new prime minister who's less experienced, who has less power centralised so [Lieberman] will be able to have more of a say. I also think there is a personal animosity there also."

The role of the Arab Joint List, will be interesting after the votes are counted. Prof Hazan says it would be fatal electorally for Blue and White to open the door to support from the Arab bloc before tomorrow.

He believes that their 'anyone-but-Netanyahu'-type outlook ensures their support for the prime ministerial vote anyway: "The only way for Blue and White to win seats and to make the result decisive is to win them from the right.

"If they are painted as a party that is prepared to govern with the extreme left wing fringe, then that will lose them seats, not gain them seats.

"So, Blue and White is walking a very thin rope of saying 'We will not govern with the Arab Joint List'. That means they will not sit in an official coalition government with them.

"But they do need the outside parliamentary support of the Arab Joint List, because without them there's no possibility of forming a majority that will keep Netanyahu out of power."

The Israeli left wing, which dominated the political life of the country for its first 30 years has collapsed to support levels below those of an array of religious and far-right parties.

This is perhaps linked to the fact that peace with the Palestinians has not featured as a serious issue in any of Israel's recent elections.

A changing of the guard in the US and the eyes of the world moving to other issues partially explain this, Anshel Pfeffer believes: "It's difficult, even for a left-wing Israeli party to make a campaign now based on Israel having to make concessions to the Palestinians when you have a president in the White House saying it doesn't need to."

The unveiling of the Trump plan for Israel and Palestine has not had the impact on the election Benjamin Netanyahu might have hoped for. 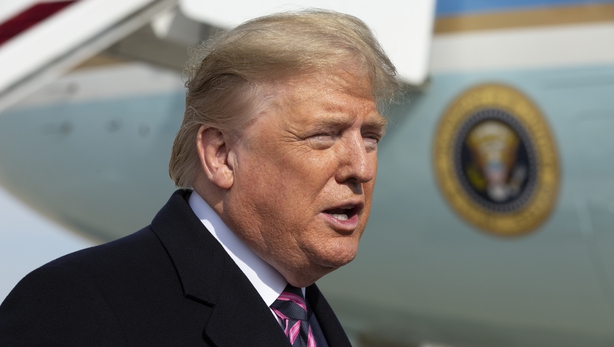 He was keen to court the US President and emphasise his close personal bond with him. But both of the main parties back the plan's proposals for large scale annexation of West Bank territory, including the Jordan Valley and settlements.

The notional dividends of the plan are not an electoral game changer for polarised and entrenched voters.

Professor Hazan thinks that the plan could be a more profound game changer in the longer term if there is a clear outcome in the election.

"Netanyahu is campaigning on 'If you want to implement the Trump peace plan, you have to vote for me because I am the one who will put it into effect right after the elections'," said Prof Hazan.

"So it hasn’t shifted Israeli voters, neither did the legal indictments of the Prime Minister. Israeli voters have been very stable, which is both good and bad.

"But the Trump peace plan, if Netanyahu manages to cobble together a government could change the borders and demographic make-up of this country, which is historical in nature."

As it enters the final days, the campaign has become more vicious. With indictments against Mr Netanyahu coming down the line in weeks, Likud has sought to raise issues about everything from Mr Gantz's mental health, to his vocal delivery, to his business background.

The most pernicious anti-Gantz election rumour doing the rounds - which he strenuously denies - is that Iran has compromising material on him as a result of hacking his phone.

Anshel Pfeffer sees a clear strategic aim in the black operations: "It's got very dirty in recent days because the stakes are very high for Netanyahu.

"Netanyahu has got a court date two weeks after the election. For him now it's really his last chance.

"If he somehow manages to eke out a majority, he's going to try to push through a law which will give him immunity while in office ... He's not just trying to win voters over, he's trying to depress the voters of the other side from going to vote."

Turnout will be a major factor in the upcoming election result. Professor Hazan believes it will drop this time around, but it is not yet clear amongst whose supporters this will happen.

He is also of the view that a fourth outing is far from unlikely.

"There is a very strict time-frame. Only two people are allowed to be given the chance to form a government. Once their clock runs out there’s an automatic dissolution of the parliament and a call for elections.

"Unless somebody changes their mind, unless the polls are completely wrong, we might have similar results on Monday night [as in September] which will lead us to the strict time-frame of government formation, which won't be successful and we'll find ourselves heading towards a fourth election. It's reluctant.

"It's not what anybody wants. Those are the rules of the game in Israel and until we sit back and try to change them because they don't work, we're stuck with them," he said.