The national debt stood at €214.7bn at the end of August, according to the National Treasury Management Agency. When you subtract what the Government holds in cash, that figure is closer to €200bn.

It's a lot of money.

In fact, it works out at approximately €42,000 for every person resident in the State. That makes Ireland’s national debt per capita the highest in the eurozone. 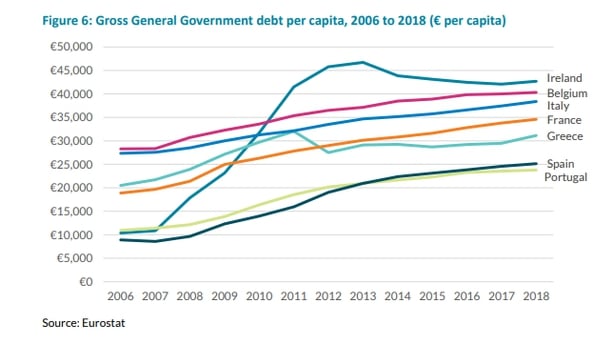 The Central Bank warned in an Economic Letter today that if there's a disorderly Brexit, or a permanent reduction in the record levels of corporation tax we’re taking in - or both - then the level of our national debt will increase significantly. In fact, it could increase by upwards of €22bn over the next five years.

As an economy grows, it can take on more debt. And if what’s borrowed is spent wisely, there will be a healthier, better-educated population able to get to work and earn what’s needed to pay off that debt.

But sometimes, disasters happen and debt just explodes. And the people who loan money to governments worry about getting it back. As bad as a disorderly Brexit may be, we’re nowhere near that scenario today. But the Central Bank is clearly signalling a potential danger.

When Ireland went through its crash and banking crisis, the level of national debt here quadrupled. 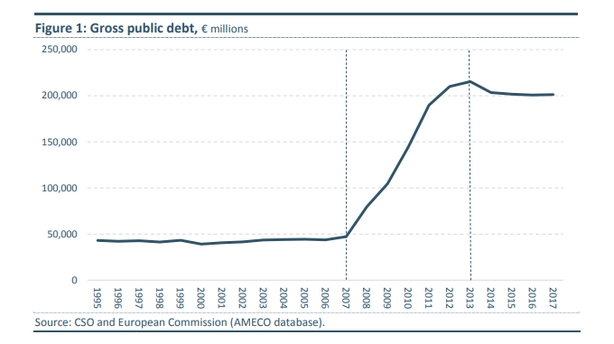 What's happened since is that economy has bounced back and interest rates have fallen. So the proportion of debt has become smaller compared to value of what’s produced in the economy every year.

Also, there has been a few one-off factors, like the sale of some of the State’s share of AIB, all of which have contributed to bringing down the burden of our national debt.

But it hasn’t gone away. 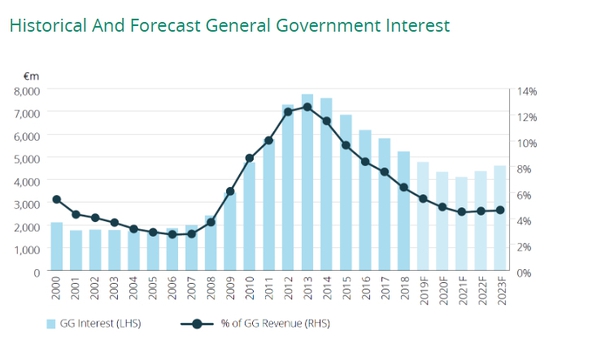 And then there's corporation tax. That’s a tax applied to company profits. There are changes to global rules on tax currently being negotiated. It’s widely believed (although it’s far from clear what will be agreed) that Ireland will collect less tax from US multinationals, in particular, once new rules are agreed.

Ireland has been enjoying something of a bonanza in corporate tax since 2015. In fact, back then it was forecast we would collect around €5bn in corporate tax in 2018. In fact, the Exchequer actually took in twice that. Much of this has been down to changes in the US tax code.

The Central Bank has taken a conservative view that we could lose €3bn a year in any corporate tax shakeup. They’ve also factored in a slowdown in the global economy.

The hit to the public finances as a result won’t be as bad as a hard Brexit but it’s in the general ballpark. And they warn that if both happen together, the impact on the economy would be magnified.

They repeat the advice to use any unexpected tax windfall to reduce our level of national debt.