On 19 February last the Department of Education published a circular instructing State second level schools to offer alternative subject choices to students who did not wish to study Religion.

This was ground breaking. Until then the only alternative for the vast majority in this situation was to sit at the back of the class during the religion lesson. Some schools made it extremely difficult for children to opt out at all.

The instruction applied only to State-run non-religious schools, schools run by local Education and Training Boards (ETBs), and Community schools, which are run jointly by ETB’s and the Catholic Church. Both kinds of schools are categorised as ‘multi-denominational’. It did not apply to Catholic schools.

Significantly, the circular included in its definition of religious ‘instruction’ the State developed curriculum, which is called religious ‘education’. This is the syllabus offered by the vast majority, if not all, of the State schools affected by this circular.

"The NCCA developed curriculum for Religious Education currently also serves to meet the religious instruction requirements of the Catholic Church", it said.

It continued: "Schools can continue this arrangement for pupils whose parents elect for Catholic religious instruction or other parents who wish to follow the NCCA curriculum".

But it said where that was the case it was important that parents were "made fully aware that the curriculum is not necessarily confined to learning about religions" (italics this writer).

Parents who had been fighting for change in this area welcomed the new circular.

Atheist Ireland welcomed the news. It especially welcomed what it saw as a recognition by the Department of Education of what it had been arguing for years; that the State’s Religious Education programme was not a neutral programme that taught ‘about’ religions, but a Catholic orientated proselytising one instead.

But other groups, including Catholic church organisations, ETB Ireland, and the Teachers Union of Ireland, objected to the new rules.

Schools were supposed to begin implementing the changes immediately, with a deadline of September for complete adoption.

But in a highly unusual development they simply ignored the instruction.

This week RTÉ News received documents under Freedom of Information which reveal strong lobbying by the Catholic church and the ETB’s in the months that followed the publication of this circular.

On 23 February, umbrella body Education and Training Boards Ireland wrote to the Department.  ETBI’s concerns centred on a distinction between the terms ‘religious instruction’ and ‘religious education’.

It also complained about the resource implications of having to offer an alternative subject choice to some students. Two individual ETB’s wrote separately, raising similar concerns.

On 27 February, the Association of Trustees of Catholic schools wrote on behalf of the Catholic patrons of the Community schools citing passages from those schools deeds of trust, including that the schools themselves "shall have the general. direction of the conduct and curriculum of the school" and questioning the Minister’s right to intervene.

The ATCS requested a meeting.

The Freedom of Information documents include a letter from an unidentified "young religious educator and student RE teacher" to the Tánaiste Simon Coveney.

Also critical of the new rules, this writer criticised the circular’s "underlying assumption of the circular that religious education today involves Catholic indoctrination".

On March 11, the Catholic bishops wrote to the Minister saying they were aware that "many others in the educational sphere have written to you expressing alarm at the circular latter".

They went on to say that they supported those who had written. They said that Community schools were teaching the state NCCA religious education curriculum which "is not religious indoctrination".

"It is critical that students are exposed to the religious interpretation of life", they wrote. 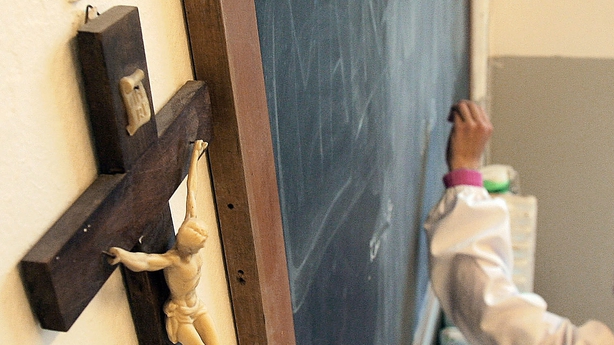 They said responsibility for the moral and spiritual education of students was a matter for school trustees. They also said they were "willing to engage" with the department.

The State lobbying register, lobbying.ie, shows that another letter on this circular was sent to the Minister by the Catholic Schools’ Partnership, but this was not included in the schedule of documents sent to RTÉ.

On 16 April, Mr Bruton replied to the bishops saying that his officials were available "to tease out any detail".

In May he replied to the Association of Trustees of Catholic Schools to say that his officials were available to meet to "discuss any concerns you may have".

The ATCS wrote back asking for dates on which to meet.

The Department refused to release two documents that fell within the ambit of the RTÉ Freedom of Information request.

The first, an internal memo sent by officials to the Minister for Education on this subject on 25 May.

The second, the notes of a meeting held between Department officials and unidentified "third parties" on 6 June.

Mr Lawlor and Ms Griffin are the chair and the secretary of the Association of Trustees of Catholic Schools. Ms Griffin is also the former head of County Dublin VEC, which became Dublin and Dun Laoghaire ETB a number of years ago.

Mr Deenihan has since become the Bishop of Meath, but he formerly represented the Irish Episcopal Commission on education matters.

The register says that two meetings were held on 6 June between these church representatives and two Assistant Secretaries at the Department, Martin Hanevy and Hubert Loftus.

This week Mr Bruton reversed his original instruction. On Friday, the Department published a new circular, a ‘clarification’ it said, reversing the obligation to offer an alternative subject to students who wished to opt out of religion.

The new circular was titled "clarification in respect of… the NCCA religious education syllabus and religious instruction". It put forward a different interpretation of that course.

"The NCCA-developed Religious Education Junior and Senior Cycle syllabuses, and the Religious Education specification for Junior Cycle, to be introduced in 2019," it said, "are intended for students of all faith backgrounds and none. The content prescribed in the syllabuses is intended to ensure that students are exposed to a broad range of religious traditions and to the non-religious interpretation of life. They do not provide religious instruction in any particular religious or faith tradition."

It said parental experience "suggests that in some schools there has been a practice of delivering Catholic religious instruction within class periods where the NCCA Religious Education syllabus is timetabled".

It said it wanted to "eliminate any ambiguity" and "accordingly adjust the arrangements in the original circular".

It said that the subject Religious Education, "must be delivered…without any religious instruction or worship of any religion forming any part of class activity".

It said that because of "this clear separation of religious instruction from the NCCA Religious Education syllabus" (this writer’s italics) there was no need, after all, to offer students who wished to opt out of the subject an alternative subject choice.

In his 1980s book, Education Policy in the 20th Century, then Professor of Education at Trinity College and former inspector with the Department of Education Seamus O Buachalla wrote: "No policy measure can be realistically implemented in the system without the tacit consent of the church."

The events described above would suggest that that may still be the case.