Eighteen months on from the General Election, with a new Fine Gael leader and a lively agenda for this Autumn's Dáil term, it is timely to see what the polls are telling us about support for the parties.

Since the election we have had more than 40 polls from the main companies, most of them either from RED C and Behaviour and Attitudes with a few from each of Ipsos MRBI, Millward Brown, and a new company, Ireland Thinks.

The set of most recent polls are of course a useful indicator of where things stand but given variations in methodology, the reality of sampling error and events having a very short-term impact it is more sensible to take a longer view.

What I have done first here is to look at the polls since September 2015, which includes the run up to the last election and the 18 months since that vote.

I show the trends for four parties, Fine Gael, Fianna Fáil, Sinn Féin and Labour and for the very diverse group of Others. I have also shown the FF lead over FG.

The graphs show each poll, a trend line and the level of support won by that party or grouping at the last election.

This last is useful as a rough indicator of whether a party might gain or lose if there was to be an election imminently, but also shows us how far the polls in February 2016 tended to overestimate or underestimate support actually achieved in the election.

We can start with the main government party, FG.

Its support looked as if it was heading for close to 30% early in 2016, but the party underperformed, and support then fell away in the polls throughout 2016. 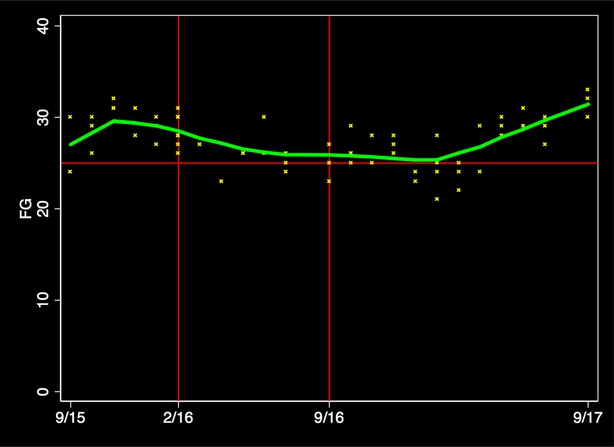 However, it has been rising steadily since May and all polls have put support above that won in 2016 – though not necessarily above what the party was polling during the election campaign.

This improvement does seem to correspond to the change in leader. Such a "bounce" is not unusual but FG will hope that there is more behind its improvement than simply a fresh face.

In contrast, FF support in the last 18 months has consistently tended to be above its election result, and well up on the Feb 2016 polls. 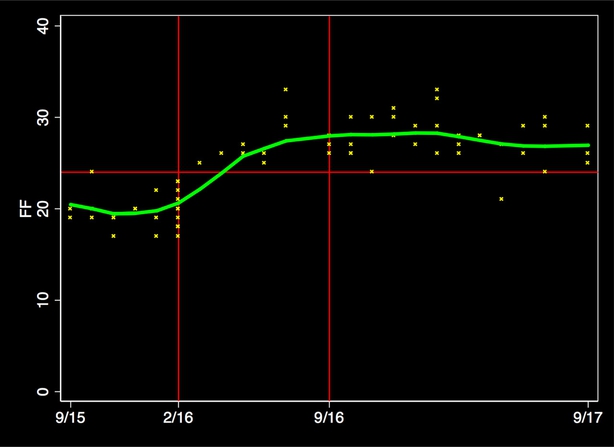 However, there is no sign of any upward trend over the last year: rather, support is holding steady in the high 20s.

Looking at the gap between the two largest parties, FF built a small but consistent lead but in the post Kenny era FG seems to have re-established FG’s position as the largest party.

These shifts are all relatively small. The key political point is that there is nothing in the polls to give either FG or FF a firm indication that they would have much to gain by an election, even if the recent example from the UK was not itself sufficient to deter such a gamble. 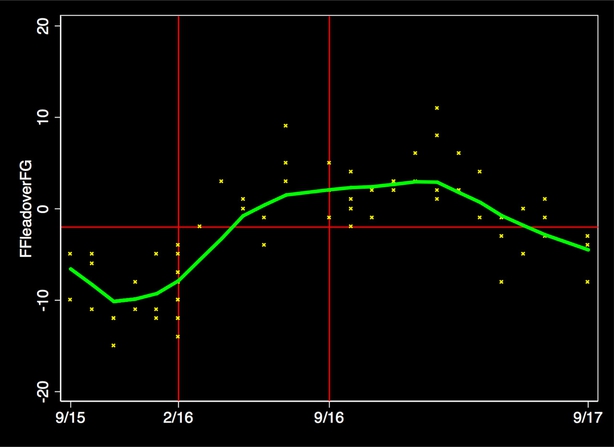 Sinn Féin has consistently polled above the 14% it won in 2016, but then it did so before that election as well.

What is more significant is that its support has shown no clear improvement over the last 18 months and while a few polls have seen the party above 20%, these have been exceptions. 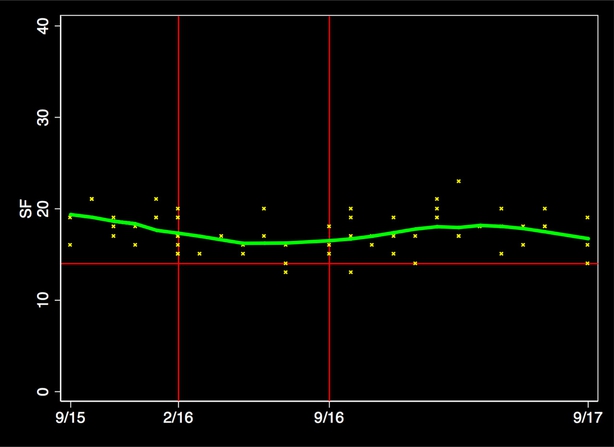 Labour’s vote is also flat as it struggles to undo the damage done by its time in government. 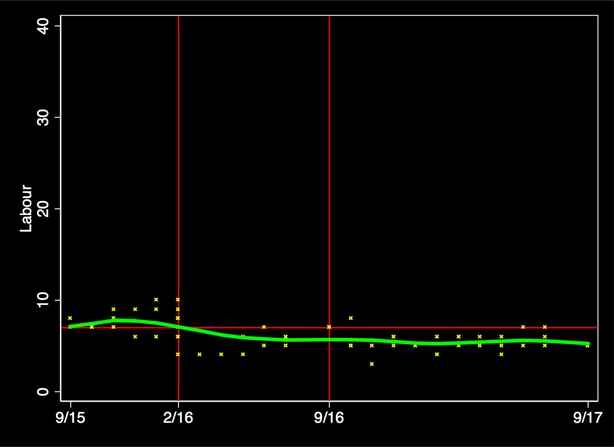 We show support for all Others in a single graph. It is important to note that the polls underestimated their support at the last election but the last 18 months has seen a steady decline even from that underestimate.

There is rather more variation in the polls for Others than we see for the five parties detailed, and a few polls in the last year have placed that grouping on or around the 30% mark, but the downward trend is clear. 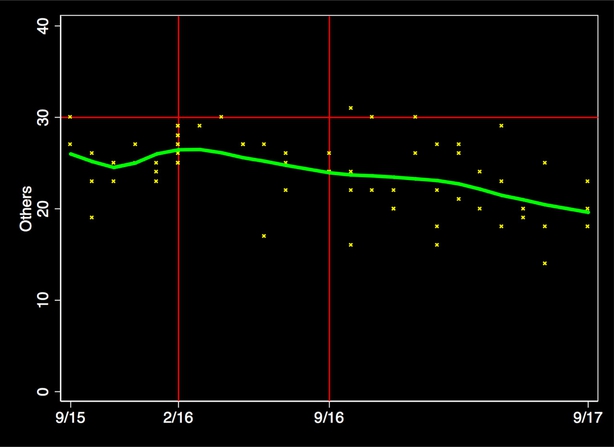 There are significant methodological differences between the different polling companies in terms of how they contact respondents, how they conduct interviews, the ordering of questions, the weighting of the sample to try to ensure it is representative and possible allowances made for the many people who will not actually vote.

There are also differences between the pre- and post-election methods, at least to the extent that the samples will be weighted in part by recall of 2016 voting and not 2011 voting.

Companies also differ in the degree of prompting with respect to the smaller parties, which may explain the particularly large variations in those figures.

The average figures for each party across each company, even allowing for timing, do vary somewhat. Some of these differences are small, notably with respect to FG and Labour. RED C do tend to show slightly higher support for FF, and more obviously, higher support for ‘Others’.

But these differences do not undermine the trends (and the lack of them) shown here: ‘Others’ have been falling in RED C polls too, just not so much.

Finally, it is worth looking at the longer view of our "new" party system which since the crash and subsequent bailout has seen our two dominant parties who once normally won around three quarters of all votes between them fail to get over half of the votes.

This last graph shows the combined FF and FG vote back to 2011, and indicates the European and local elections in 2014 and the most recent general election. 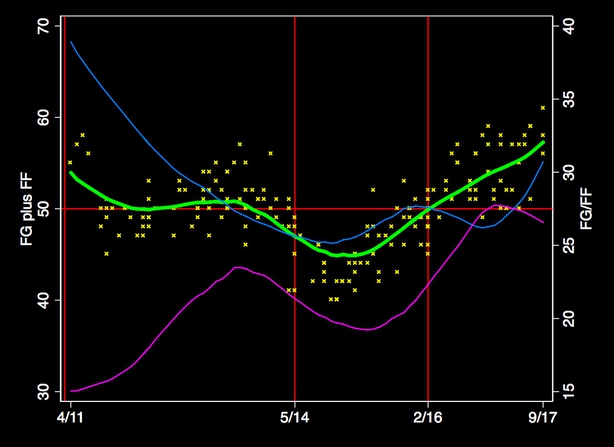 What is striking here is that the combined vote for the two has been rising steadily since late in 2014, at the height of the protests over water charges, when it was barely above 40% , to close to 60% in recent polls.

The subsidiary lines indicate support for FG and FF separately (the axis for them is on the right, and no scatterpoints are shown. Much of the rise over the last two years or so is down to growth in FF support but more recently the spurt is down to FG.

It is still a very long way from what it once was but as we go into the second of the three budgets covered in the confidence and supply agreement between the two traditional rivals, it seems that the voters are less uncomfortable with the choice between them. 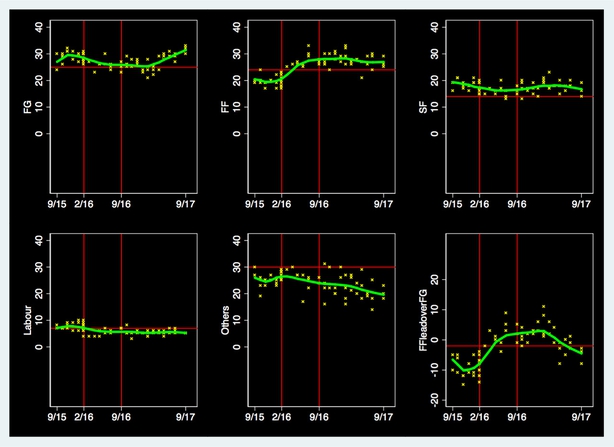