Almost 30% of people have taken up a new outdoor activity since the start of the Covid-19 pandemic in Ireland, according to figures released by the Central Statistics Office.

Earlier figures showed the majority of respondents spent more time outdoors since the start of the pandemic, while 28% spent the same amount of time outdoors, and 17% spent less time outdoors.

Participants were more likely to take up sea swimming in the West (27%) and Border regions (34%), while hill walking was the most popular activity in the Mid-West (33%) and cycling in the Mid-East (27%).

Since the start of the pandemic, participants living in urban areas were more likely to say they took up running (28%) than respondents living in rural areas (19%). 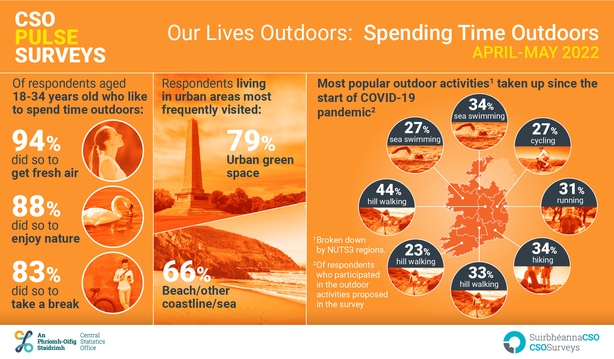 Over the past six months, 41% of respondents who had access to a garden spent time outdoors daily for recreational purposes, while those who did not were more likely to spend time outdoors on a weekly basis (40%).