Israeli police said they had arrested a suspect in a shooting attack on a bus in Jerusalem's Old City that wounded eight people, two critically and including a pregnant woman.

A gunman started spraying bullets at the public transport bus and people outside the vehicle in the pre-dawn attack at the Tomb of David bus stop, according to bus driver Daniel Kanievsky.

"I was coming from the Western Wall. The bus was full of passengers," he later told reporters in front of his bullet-riddled vehicle.

"I stopped at the station of the Tomb of David. At this moment, the shooting started. Two people outside I see falling, two inside were bleeding. Everybody panicked."

"We were on the scene very quickly," its medics said in a statement.

MDA spokesperson Zaki Heller initially said six men and one woman were wounded, with all seven "fully conscious", before police raised the wounded toll to eight.

One of the wounded was a pregnant woman, whose baby was delivered after the attack, a Shaarei Tsedek Hospital spokesman told AFP.

"She remains intubated and in serious condition," he said. "The infant was delivered and is in serious but stable condition." 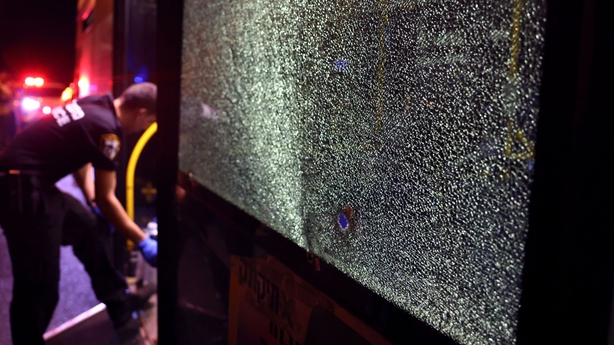 Israeli Prime Minister Yair Lapid said after the attack that police, the army and other security services "are working to apprehend the terrorist and will not cease until he is caught".

"All those who seek our harm should know that they will pay a price for any harm to our civilians," Mr Lapid added in the statement.

"The police and the IDF are working to restore calm and a sense of security in the city," he said, referring to the Israeli Defense Forces.

The shooting came a week after the end of a three-day conflict between Israel and Islamic Jihad militants in the densely populated Palestinian enclave of Gaza.

At least 49 Palestinians, including Islamic Jihad fighters and a number of children, died in the violence which ended last Sunday after Egypt negotiated a truce.

Since March, 19 mostly Israeli civilians inside Israel have been killed in attacks.

In the aftermath of those attacks, Israeli security forces stepped up raids in the occupied West Bank.

More than 50 people have been killed, including fighters and civilians, in operations and incidents in the West Bank since then.