Six months on from his invasion of Ukraine, the world is still trying to figure out exactly what it is that Vladimir Putin wants from this war, or "special military operation" as it's known in Russia.

Is he trying to reclaim what he sees as the lost glory of the Soviet Union? Is it a power grab by a leader looking to burnish his reputation as a strong leader with his own people? Is it an almost inevitable step from a leader in power for 20 years who has come to believe he is invincible?

Perhaps one of the best ways to try to understand the Vladimir Putin of 2022 is to look back at how he got here, by examining six pivotal points in his leadership.

The sinking of the Kursk submarine during a naval exercise in the Barents Sea in 2000 was the first major domestic test of Vladimir Putin's leadership.

Tortuous efforts to save the 118 people on board continued for days, but to no avail.

Amid criticism that rescue efforts had been slow and that authorities had failed to accept help from other countries, Putin visited the Kursk's home port of Vidyayevo, where he met bereaved relatives.

In a sign of just how different things were then, the anger of those families who had lost loved ones in the disaster was broadcast across Russia.

In what would have been an embarrassing encounter for any leader, Putin offered his apologies.

But he also looked to share the blame, turning on many of the tycoons who ran the television channels that broadcast the exchanges.

The Kursk tragedy showed a leader still struggling with the expectations of his new role. The criticism clearly stung, but perhaps also taught the president a lesson in control.

In the years ahead, there would be far less general interaction with members of the public and Putin came to see the media tycoons who chastised his reaction in a very different light.

The relationship between Vladimir Putin and Boris Berezovksy is a template for many other Russian oligarchs.

Initially an ardent supporter of President Putin, Berezovksy began to criticise elements of Putin's leadership with which he did not agree.

His television network criticised the Kursk rescue efforts, and the relationship between the two men began to deteriorate.

Boris Berezovsky left Russia, going into exile in the UK, where he was eventually granted political asylum in 2003, and where he would die a decade later.

Police said Berezovsky took his own life, but there was continued intense speculation that his death might have been suspicious.

The coroner returned an open verdict saying the burden of proof set such a high standard that it was impossible to say definitively if it was really suicide.

The breakdown in the relationship between Boris Berezovsky and Vladimir Putin acted as a warning to other oligarchs not to step out of line.

To do so risked their relationship with the president, as well as risking their assets and their freedom.

Others, such as Mikhail Khodorkovsky, would eventually follow Berezovsky into exile, leading a string of Russian emigres warning about the dangers of a Russian leader they characterised as out of control and on the path to dictatorship.

'We showed ourselves to be weak. And the weak get beaten' - Vladimir Putin

The worst school shooting in history, the Beslan school siege of 2004 led to the deaths of 333 people - 186 of which were schoolchildren - who were rounded up in their school and held in the gymnasium by a group of armed Chechen terrorists.

The standoff, which involved more than 1,100 hostages, initially continued for several days, as the brutality of the attack shocked the world.

At first there were attempts to negotiate with the hijackers, but eventually the school was stormed by Russian forces.

Amid accusations of censorship and disinformation from the Kremlin, President Putin visited some of the Beslan wounded in hospital in what were sometimes uncomfortable encounters.

Some of those families would later blame Russian special forces for killing their loved ones when they stormed the school.

In the days after the awful events in Beslan, Putin addressed the nation, saying: "We stopped paying the required attention to defence ... we showed ourselves to be weak. And the weak get beaten."

Putin had learned that he did not want to be seen as weak, and began working on widespread political reforms which would see power consolidated more in the Kremlin and him become increasingly dominant.

Less than a year after the Beslan massacre, the influence of what had happened at the school was clear from the tone of President Putin's address to the nation in April 2005.

The president told a nation still grieving and grief-stricken that the collapse of the Soviet Union was "the greatest geopolitical catastrophe of the century" and a "genuine tragedy" which had left millions of Russians outside of the Russian Federation.

He described a USSR weakened by fragmentation and more at risk as a result.

It seemed to purposely capture the nostalgia already in the air, just weeks before the 60th anniversary of the end of World War II in Europe, or the Great Patriotic War as it is known in Russia.

That patriotism ran throughout Putin's comments and acted as an early indicator for Western powers that Putin might be more enticed by the Soviet Union of the past than they had at first believed.

It was a portent of things to come in the decades ahead, as Putin harked back to an imperial power which he clearly believed had been a golden era.

If Western leaders were operating on the basis of "by his speeches ye shall know him" then Putin's speech just two years after his comment about the demise of the Soviet Union would set out what many now see as a blueprint for his leadership.

The 2007 Munich security conference harked back to a language and rhetoric that many in the West thought was gone. 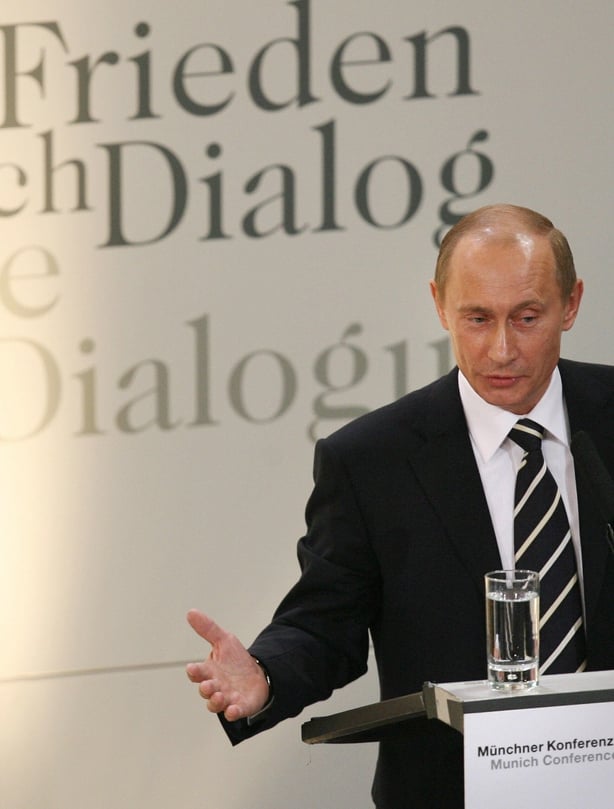 President Putin began by saying the conference structure allowed him "to avoid excessive politeness" and he certainly followed through on that.

Gone was the backslapping joviality displayed in his first meeting with US President George W Bush in 2001, when the US leader talked of having got a sense of Putin's soul, declaring the Russian leader to be "very straightforward and trustworthy".

"I looked the man in the eye. I found him to be very straightforward and trustworthy. I was able to get a sense of his soul." - US President George W Bush in 2001

This time, Putin railed against US attempts to create a unipolar world which had one leader - the US.

And his ire was also aimed at NATO, saying that expansion of the organisation "does not have any relation with the modernisation of the alliance itself or with ensuring security in Europe. On the contrary, it represents a serious provocation that reduces the level of trust".

Putin described a West which held no value for Russia, as he laid down the gauntlet to Western leaders about where he saw Russia's future.

The death of Boris Nemtsov

Boris Nemtsov died within sight of the Kremlin, gunned down as he walked along the banks of the Moskva river.

He had once been a government insider, a former deputy prime minister of Russia under Boris Yeltsin.

But by the time of his death in 2015 he was the leading opposition figure in Russia, an ardent critic of the Russian president, who highlighted issues of corruption under Putin's leadership and organised large anti-Putin rallies.

The world had watched as other Putin critics - like journalist Anna Politkovskaya - were killed in Russia and others, like Alexander Litvinenko, were killed abroad.

But the death of Boris Nemtsov would push the boundaries even further, leading many in the opposition movement to finally conclude that no one was safe once they criticised the Russian president.

When authorities announced that any CCTV cameras which might have filmed the shooting just happened to have been turned off at the time it added further insult to injury.

The death of Boris Nemtsov taught figures like Alexei Navalny that to continue opposing the Russian president was to put their life on the line.

For many who had taken part in demonstrations the risks became too great. Many fled, or stopped protesting out of fear of what it would mean for them or their families.

The war in Ukraine is very likely to be the defining event of Vladimir Putin's lengthy time as Russian leader.

It has brought war to Europe, something considered almost incomprehensible just over a half a year ago.

Once the first missiles flew in the early hours of 24 February, the world changed in a way we are still trying to comprehend.

The six events outlined above are just some of those that could have been chosen from a leadership which stretches back over two decades.

But each gave an indication of where Putin's beliefs might lead, not just for him, but ultimately for the whole world.