Russian president Vladimir Putin has warned the leaders of Germany and France against ramping up arms supplies to Ukraine, saying they could further destabilise the situation in the country.

Mr Putin told French president Emmanuel Macron and German chancellor Olaf Scholz that the continuing arms supplies to Ukraine were "dangerous", warning "of the risks of further destabilisation of the situation and aggravation of the humanitarian crisis," the Kremlin said.

The Russian president also said Moscow was "ready" to look for ways to ship grain stuck in Ukrainian ports.

"Russia is ready to help find options for the unhindered export of grain, including the export of Ukrainian grain from the Black Sea ports," Mr Putin said, according to the Kremlin. 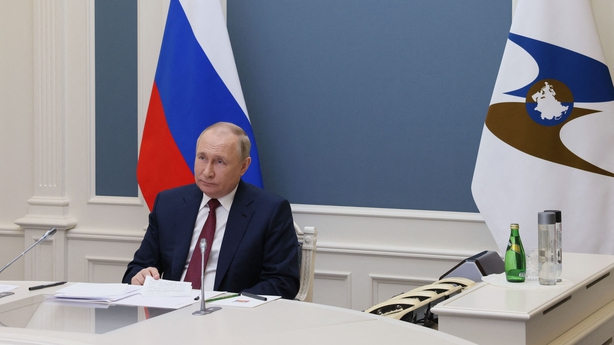 "An increase in the supply of Russian fertilisers and agricultural products will also help reduce tensions on the global food market, which, of course, will require the removal of the relevant sanctions."

It comes as Russian forces continue their assault on the Ukrainian city of Sievierodonetsk, after saying they had captured the nearby rail hub of Lyman.

Russian gains in the eastern Donbas region in recent days indicate a shift in momentum in the war, now in its fourth month. The invading forces appear close to seizing all of the Luhansk province of Donbas, a main Kremlin war goal, despite Ukrainian resistance.

Russia's defence ministry said its troops and allied separatist forces were now in full control of Lyman, site of a railway junction and lying west of the Siversky Donets River in Donetsk, which neighbours Luhansk.

The Russian forces were likely to try to cross the river in coming days in the next phase of the Kremlin's Donbas offensive, the British defence ministry said in its daily intelligence report.

Sievierodonetsk, some 60km from Lyman on the eastern side of the river and the largest Donbas city still held by Ukraine, is now under heavy assault from the Russians.

Russian artillery was also shelling the Lysychansk-Bakhmut road, which Russia needs to take to close a pincer movement and encircle Ukrainian forces.

"There was significant destruction in Lysychansk," the police said.

The governor of Luhansk, which along with Donetsk makes up the Donbas region, said yesterday Russian troops had already entered Sievierodonetsk. Ukrainian troops may have to retreat from the city to avoid capture, governor Serhiy Gaidai said.

The Russian forces have been making slow but steady advances in Donbas - large parts of which were already controlled by Moscow-backed separatists before the war - after failing to capture the capital Kyiv soon after their 24 February invasion.

Their tactics involve mass artillery bombardments and airstrikes that have laid waste to towns and cities.

The General Staff of Ukraine's armed forces said Ukrainian forces had repelled eight assaults in Donetsk and Luhansk in the previous 24 hours. Russia's attacks included artillery assaults in the Sievierodonetsk area, it said.

"If Russia did succeed in taking over these areas, it would highly likely be seen by the Kremlin as a substantive political achievement and be portrayed to the Russian people as justifying the invasion," the British intelligence report said.

Some 90% of buildings in Sievierodonetsk were damaged, Mr Gaidai said, with 14 high-rise buildings destroyed in the latest shelling. Several dozen medical staff were staying on in Sievierodonetsk but they faced difficulty just getting to hospitals because of the shelling, the Luhansk governor said.

"If the occupiers think that Lyman and Sievierodonetsk will be theirs, they are wrong. Donbas will be Ukrainian," Mr Zelensky said.

Analysts at the Washington-based Institute for the Study of War said that while Russian forces had begun direct assaults on built-up areas of Sievierodonetsk, they were likely to struggle to take ground in the city itself. 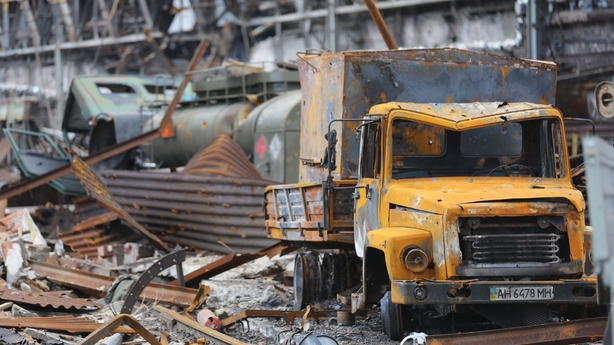 "Russian forces have performed poorly in operations in built-up urban terrain throughout the war," they said.

Russia says it is waging a "special military operation" to demilitarise Ukraine and rid it of nationalists threatening Russian-speakers there. Kyiv and Western countries say Russia's claims are a false pretext for war.

Thousands of people, including many civilians, have been killed and several million have fled their homes in the war. Russian destruction of whole urban areas has drawn widespread international condemnation, although Moscow denies targeting civilians.

Russian President Vladimir Putin has not been deterred by abroad range of Western sanctions on Russia, nor by earlier battlefield setbacks.

Russia's eastern gains follow the withdrawal of its forces from approaches to Kyiv, and a Ukrainian counter-offensive that pushed its forces back from Ukraine's second city, Kharkiv.

Ukraine's General Staff said that multiple Russian strikes had hit nearby communities and infrastructure near Kharkiv.

On the diplomatic front, European Union officials said a deal might be reached by Sunday to ban deliveries of Russian oil by sea, accounting for about 75% of the bloc's supply, but not by pipeline.

Mr Zelensky has criticised the EU for delaying such a ban.

But his country has also received a steady supply of weapons from allies. In the latest such delivery, Ukrainian Defence Minister Oleksiy Reznikov said Ukraine has started receiving Harpoon anti-ship missiles from Denmark and self-propelled howitzers from the United States.