A married couple in England have been revealed as the winners of last week's EuroMillions lottery jackpot worth more than €215 million.

Joe and Jess Thwaite, from Gloucester, scooped a record-breaking £184,262,899 with a quick pick ticket on the draw on Tuesday 10 May.

Joe, 49, a communications sales engineer, and Jess, 44, who runs a hairdressing salon with her sister, have been married for 11 years and have two primary-school aged children.

Mrs Thwaite said: "The win gives us time to dream, which we haven't had before. We've had one week to think about this and we now have time to share lots of experiences and go on adventures with our family and friends."

Mr Thwaite said he was working on Tuesday and by 4pm he thought he "better buy a ticket" because he was aware of the jackpot.

He said he regularly buys tickets, adding: "I normally buy them when it's a good amount, so when there's a lot of money I'll put it on. I use the app, and have a quick check a couple of times a week and I'll put it on.

"But generally my luck is pretty terrible, to be honest with you."

Mrs Thwaite said: "He tries to convince me to buy them thinking I'll have more luck, but actually it's him." 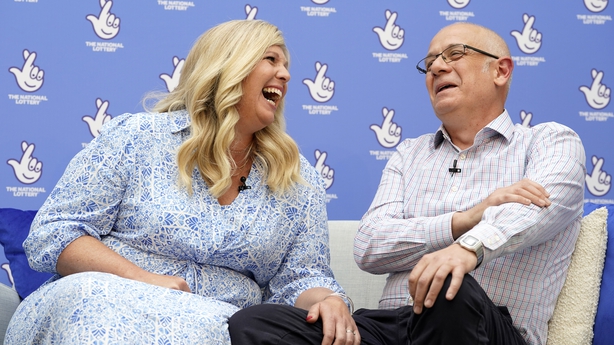 Mr Thwaite said that when he received an email telling him he won a prize he thought it was a lucky dip.

But then he "started counting the digits", adding: "Amazing, but also surreal."

He said they have been trying to move house for quite a while and he went on a housing website.

Mrs Thwaite said her husband woke her up, saying it was a "normal husband-and-wife grumpy morning".

She said she told him: "'Just let me turn the alarm off' and he was like: 'I've got a secret to tell you."'

The 44-year-old said he then told her they had won £184 million and her reaction was: "Don't be stupid."

Mrs Thwaite said she then thought: "This is a fun game to play, this is wrong, there's obviously something wrong with the app, Let's go with it and let's enjoy this moment of thinking we've won the lottery because it's not real."

She said they decided to ring the lottery office at 8am when it opens, adding: "I was like: 'Right, I'll go make coffee and get on with the day."' 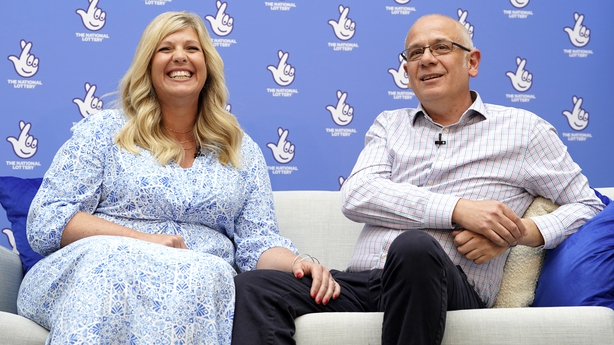 When the office told them they "definitely had won", Mrs Thwaite said: "I didn't think it was real to be honest. I still don't think that it's real."

Asked if they are worried about scammers or people coming forward who may want to take their money, Mrs Thwaite said: "I haven't even thought of anything like that. To be honest, we're a week in.

"We're, like, so overwhelmed by this stuff. I just haven't even got to consider that if I'm honest."

Her husband added: "We're trying to think of all the positives. That's the main thing of this is there's a lot of positives."

Asked if they would carry on working after their win, Mrs Thwaite said: "I don't think we are at the moment.

"I'm going to take some time with that and what we're going to do."

Mr Thwaite said he had handed in his notice: "I'm leaving work."

Mrs Thwaite added: "I think we're going to have a full-time job managing all of this for quite some time."

She said her mother screamed when she told her they had won the EuroMillions.

She said she works with her mum and her sister, adding: "We're just not the family that could lie to one another or just you know, we're really close family and I couldn't have gone to work and not told them something.

Meeting her mother in the car park, Mrs Thwaite recalled their conversation, saying: "I said: 'I've got something to tell you, a secret to tell you but you have to promise not to tell anybody.

Mrs Thwaite said she told her mum: "it's better than being pregnant."

She said her mother "literally screamed in the car park and burst into tears".

"Even though it's wonderful and exciting, it's also a massive relief for everybody that's been struggling with all their bills and all their things for all this time," she added.

"To tell the truth, we bought bedroom furniture. We bought a chest of drawers and a wardrobe.

"Other than that we haven't done anything."

Asked if they would reach out for advice from past lottery winners, Mr Thwaite said: "We want as much advice as we can get."

The couple were asked about whether they plan to help causes or charities close to their heart.
Mr Thwaite said: "Do you know what, I think that's an area we will get to but we're one week in.

"It's blown our mind just getting to this point, and you know, we're not there yet, but we're going to definitely take some advice and talk to people about those things."

He said: "I still keep thinking I'm going to, like, fall out of bed and it's all going to be a dream."