The Garda Representative Association has described the manner in which the issue of the management of 999 calls has played out in public as "shocking".

The president of the association told the Deputy Garda Commissioner this evening that gardaí were deeply hurt by the public perception that they failed to respond to calls for help from thousands of citizens.

The Garda Representative Association strongly criticised the Garda Commissioner's handling of the 999 calls controversy at its annual conference this evening.

The controversy began after it was discovered that more than 200,000 emergency calls between 2019 and 2020, over 3,000 of which related to domestic violence, had been improperly cancelled.

The Garda Commissioner recently said their investigation had unearthed just two incidents of particular concern, but the Policing Authority is not satisfied and is awaiting the outcome of its own independent investigation.

GRA president Frank Thornton said gardaí have had their professionalism and dedication called into question which has not been helped by what he described as a rush to comment on sensationalist headlines in the absence of facts.

He also said while the GRA accepts oversight and accountability and does not dispute facts, there is something fundamentally wrong when the Policing Authority Chair and the Commissioner of An Garda Síochána are making statements that damage the reputation of GRA members and undermine public confidence in advance of facts being established or reports being issued.

He told Deputy Commissioner Anne Marie McMahon that gardaí were deeply hurt and that the office she represents has contributed to a public perception that members failed to answer or respond to calls for help from thousands of citizens.

The GRA also strongly criticised the procedures for suspending members of An Garda Síochána.

Over 80 gardaí are currently on suspension but the delegates at the association's annual conference voted unanimously for a review of the protocols on suspension with a greater emphasis on keeping members at work.

The conference which opened this morning was also told there are not enough gardaí to safely police the streets.

There was an angry and emotional start to a Covid restricted annual GRA conference this morning with gardaí particularly upset about colleagues who have been left on suspension for long periods with no findings of wrongdoing.

One delegate told the conference that he recently spoke to a garda on suspension who told him the greatest highlight of his day was to walk the dog.

81 gardaí have been suspended from duty up to last September. The GRA today voted unanimously for a review of the suspension process and the publication of the subsequent report's findings.

The president Frank Thornton said gardaí are entitled to the presumption of innocence and what the association wants is transparency in the process. At present he said members are simply notified they are on suspension and are given little other information. 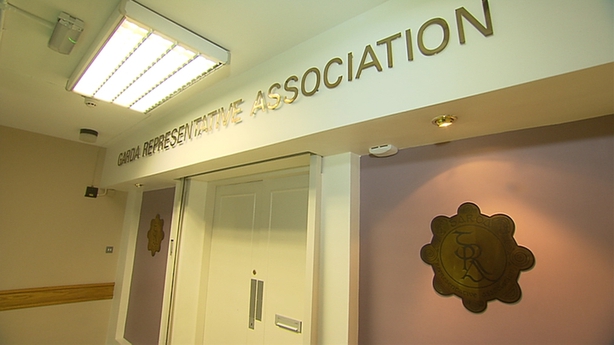 4,500 gardaí assaulted over past five years

The issue of assaults on gardaí was also raised as the latest figures from the Department of Justice show 4,500 gardaí were assaulted over the past five years, an increase of 57%, with over 1,000 of those occurring last year.

Vice President Brendan O'Connor said assaults increased even during the pandemic when the streets were quieter and the association wants mandatory sentences for those convicted of attacks on frontline workers.

The GRA also said there are not enough gardaí to safely police the streets.

Garda Damien McCarthy told the conference that gardaí in Dublin south central had to call in extra public order officers from counties as far away as Leitrim to police Dublin city centre and he warned of drastic consequences if more gardaí were not recruited.

And the gardaí say they are being asked to do work which they are not trained for, particularly in relation to domestic violence and coercive control.

Garda James Morris Roe from Cavan/Monaghan said there has been no classroom based training for specialist officers in detective units and divisional protective services units and yet they are expected to deal untrained with complex and sensitive cases.

The Minister for Justice and the Deputy Garda Commissioner are due to address the conference this evening.