Lava from the erupting volcano on La Palma in the Canary Islands that began cascading into the ocean 36 hours ago has already covered more than 25 acres at sea, experts said today.

Since it began on 19 September, the dramatic eruption has forced thousands out of their homes, while lava has destroyed hundreds of houses, businesses and huge swathes of banana plantations.

The volcano spewed out rivers of lava that slowly crept towards the sea, eventually pouring into the Atlantic Ocean late on Tuesday in a flow which has not stopped.

"Estimates suggest it has already covered more than 10 hectares" at sea, David Calvo of the Canaries' volcanology institute Involcan told AFP, saying experts would carry out a more accurate assessment with drones in the coming hours.

Since then, the rivers of molten rock have not stopped cascading into the sea, creating a growing lava delta in what Calvo described as "a phase of stability".

"The lava is continuing to flow like a waterfall and a lava delta is forming at the base of the cliff, extending southwards," the Pevolca volcanic emergency committee said late Wednesday.

As the white-hot lava poured into the sea, it sent plumes of acid fumes into the air that experts said could irritate the skin, eyes and respiratory tracts, possibly causing breathing difficulties.

But fears it could affect the local population were quickly allayed as strong winds dispersed the vapours over the sea.

"There are still clouds of gas, but it's like yesterday -- although there is less wind," said Calvo.

Even so, some 300 residents in the nearby town of Tazacorte have been told to stay at home to avoid any chance of inhaling the gases and a 3.5-kilometre exclusion zone remained in place, which also extends two nautical miles out to sea.

"Until we know that these areas are not at risk, these measures will be maintained," Pevolca's Ruben Fernandez said yesterday evening. 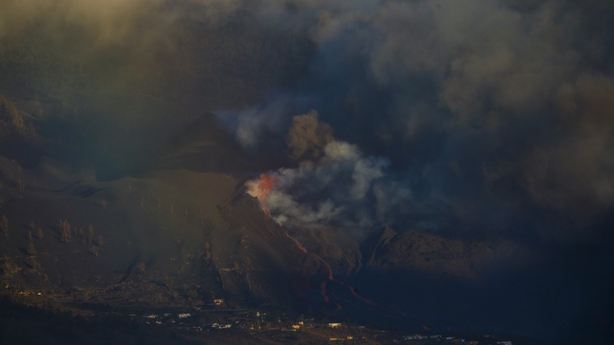 La Palma has been declared a natural disaster zone, with the lava scorching its way across 476 hectares of land, the local government said on Twitter.

And it has so far destroyed 855 buildings, an increase of more than 200 in just over 24 hours, the EU's Copernicus observation programme said on Twitter.

The eruption of La Cumbre Vieja has forced some 6,000 people to flee their homes but so far, nobody has been injured or killed.

Although the volcano is still erupting, La Palma's airport resumed operations yesterday after flights were suspended at the weekend due to the ash.

La Cumbre Vieja lies about 15 kilometres west of the airport as the crow flies, although the lava has only spilt down the western side of the volcano.