Friday was a bad day for Joe Biden.

The latest in a series of bad days for the US President.

In the space of an hour, the Pentagon admitted making a "tragic mistake" after a US drone strike in Kabul killed 10 civilians including seven children.

A panel advising the US Food and Drug Administration voted against Covid-19 booster shots for all Americans, dashing a White House hope.

And France recalled its ambassador to the US in an row over a submarine deal with Australia.

Joe Biden was no doubt pleased that, for a while at least this weekend, the focus was taken off him and was instead centred on the storming of the Capitol Building on 6 January - an incident he most definitely cannot be blamed for.

The 'Justice for the J6' rally was held to show support for those arrested following the riot at the Capitol.

The turn-out was small with the protesters outnumbered by media and police.

Anders Bruce said he was there to demand justice for those charged with minor offences.

"Anyone who broke the law deserves to be punished but we are here for the majority of the 600 people who were charged with non-violent offences like trespassing, their punishment has been disproportionate," he said.

Ken Ford said he believes many of those involved in the riot on 6 January did nothing wrong.

"It's our Capitol and we let the politicians use it. The way some of them went in was wrong but if we want to walk into our Capitol we should be able to, we paid for it," he said.

A massive security operation had been put in place in advance of the demonstration, with authorities keen to avoid a repeat of the chaotic scenes that unfolded in January.

The high, black fences that surrounded the Capitol for months after the deadly insurrection were put back up, along with surveillance cameras.

While the event passed off peacefully it was nonetheless an awkward moment for Republicans.

Senior members of Congress distanced themselves from the rally in the days leading up to it, but many Republicans continue to embrace the so-called 'big lie' that the election was stolen from Donald Trump and that Joe Biden cheated.

Despite a lack of evidence of widespread voter fraud, they push these falsehoods amid fears that they will face a backlash from their voters.

Polling shows that a majority of Republicans still believe the election was stolen.

The former president Donald Trump avoided today's rally claiming it was a set up. 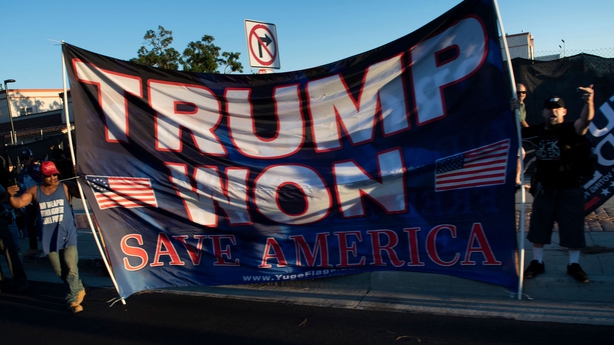 In a statement, however, he did voice his support for those arrested following the storming of the Capitol.

"Our hearts and minds are with the people being persecuted so unfairly relating to the January 6th protest concerning the Rigged Presidential Election," Mr Trump said.

"In addition to everything else, it has proven conclusively that we are a two-tiered system of justice. In the end, however, JUSTICE WILL PREVAIL!" his statement read.

Republicans want to focus on the problems besetting the Biden administration like the botched withdrawal from Afghanistan, the migrant surge at the US-Mexico border and the ongoing Covid-19 crisis.

For the party's leadership, the storming of the Capitol is something they are eager to move on from but the 'Justice for the J6' rally brought memories of that violent day back into the public mind and returned it to the headlines once more.

Today's rally may not have been very loud but it was nonetheless a headache for Republicans.