Average rents for residential properties rose by 5.6% nationally between April and June, according to the latest quarterly rental report from the website Daft.ie.

The report shows rents rising faster outside Dublin and a record low number of properties available for rent.

The Daft.ie rental report for the second quarter of this year shows the widest difference between how rents are moving across the country since the series began 15 years ago. 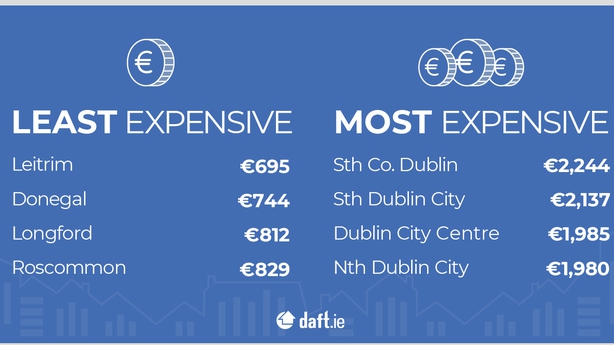 The most dramatic finding was the scarcity of supply.

On 1 August, there were 2,455 properties available for rent nationally, the lowest on record since the series began.

Speaking on RTE's Morning Ireland, economist and author of the report, Professor Ronan Lyons, said the rent increases are largely as a result of the Covid-19 pandemic.

He said report shows increases that "off the charts" in a number of counties, where rents have risen between 13 and 18% year on year.

He said rents in Co Kerry have increased by 16.5% year on year, and 5% between March and June alone.

Prof Lyons said the growing population is part of the reason for the demand, along with a lack of new rental accommodation in the last 15 years and warned the lack of availability could make it difficult for students to access accommodation from September.

"Ireland's rental sector has undergone a lost decade and half, with almost no new rental homes built. This cannot be solved by trying to regulate prices. It can only be solved by adding significant amounts of new supply," he said.

He pointed out that the problem was now widespread, and not confined to Dublin.

"Policymakers - and citizens - should be wary of anything that limits the ability of foreign savers to build new rental homes here," Prof Lyons added.

Responding to the report, the Institute of Professional Auctioneers & Valuers said it demonstrated the need to tackle the issue of supply and that would be done by building homes at affordable prices.

IPAV Chief Executive Pat Davitt said landlords are choosing to leave the rental market because restrictions on increasing rent is impacting on their ability to get a return on their investment.

He said that there is a "need to bring parity into the rental market".

Mr Davitt said IPAV is calling on the Central Bank to introduce a change to mortgage borrowing rules to allow people to borrow 4.5 times their income and said borrowing rules "need a step in them so that people earning up to €60,000 should be able to borrow enough money to buy a property".

The CEO of Threshold John Mark McCafferty said more can be done in relation to the tax treatment of landlords, to incentivise smaller landlords to remain in the sector.

Speaking on RTÉ's Drivetime, Mr McCafferty said that this is part of the reason they are seeing a reduction in the number of available rented houses and apartments.

He said that "there's a key issue here in terms of affordabilty for tenants that we're working with, that we're advising, but the number of landlords opting to leave the sector is the single biggest contributor to rental evictions".

Sinn Féin's spokesperson on Housing Eoin Ó Broin said the Daft.ie report shows there is a "structural crisis" in the private rental sector.

He reiterated his call for a three-year ban on rent increases and said there needs to be a "dramatic" increase in funding for affordable cost rental.

The Dublin Mid-West TD fears that a return to office working later in the year could see "the flatlining of rents in Dublin City Centre start to rise again", and said the Government needs to be investing "hundreds of millions of euros" each year to deliver affordable cost rental accommodation. 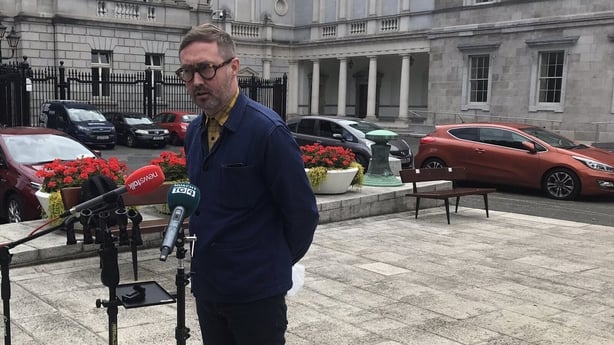 Mr Ó Broin also called on the Government to adopt a Focus Ireland amendment, which would prevent buy-to-let landlords from evicting tenants while a property is being sold.

According to Sinn Féin, the three-year ban on rent increases should be imposed across the country, to be then followed by measures which would link all residential rents to inflation.