HSE CEO Paul Reid has said that many key measures and trends of Covid-19 within the community remain very positive, but the threat of the Delta variant is something that must be monitored closely.

"We're at a point of unease and apprehension as to what might happen next," Mr Reid said at the weekly HSE briefing today.

He said there is "no certainty" when trying to predict what will happen next with this virus.

However, Mr Reid also said that "we are certainly in a much stronger position now" when compared to the beginning of this year when only small numbers of people had been vaccinated. 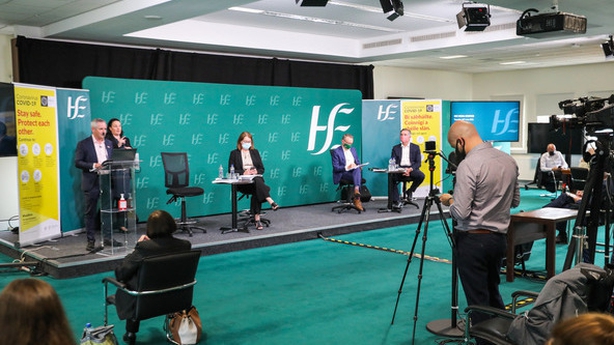 Mr Reid said that 84% of cases of Covid-19 are being recorded in people below the age of 45. He said this demonstrates the continued benefits of the vaccination programme.

He said that there has been a continued decrease in case numbers of 22% over the previous 14 days, along with a reduction in hospitalisations. There are currently 47 patients in hospital with Covid-19, including 13 in intensive care.

On the subject of the Delta variant, Mr Reid said that around 20% of cases in Ireland are now due to this variant. This was indicated by Chief Medical Officer Dr Tony Holohan earlier this week.

Health officials have expressed concern that the Delta variant could soon become the dominant variant in Ireland, as it did in Britain.

Figures correct up to Tuesday 22 June have shown there have been 210 Delta variant cases in Ireland, according to the HSE.

.@paulreiddublin says "there is no certainty" when trying to predict what might happen with Covid-19, but adds that incidence and case numbers are down on recent weeks | More: https://t.co/ZbZhHfV6Ui pic.twitter.com/HhyTj2aAKA

Mr Reid said that we know it has slowed down the UK reopening and is believed to be 40-60% more transmissable than the original virus.

He said that the vaccines are definitely winning against the virus, but it is still far early to be "declaring victory" or taking "a lap of honour" at this stage.

HSE Chief Clinical Officer Dr Colm Henry said the cases of the Delta variant "will go up" and that "there's no way we would be any different to other countries in seeing this take off".

Mr Reid said the Government would be making decisions in relation to the further reopening of society shortly, and while the HSE is in a stronger position than during the winter, there is also a significant demand on its services at present.

He also said that the HSE's advice to the Government has been that the health service cannot go back to the "dark days" of January and February, with high numbers hospitalised and in ICU.

Mr Reid said healthcare workers were exhausted from working at the frontline against the virus since March 2020 and the situation seen earlier this year cannot be allowed to happen again.

It was hard to envisage a situation where there would be in excess of 2,000 patients in hospital with Covid-19 again, according to Mr Reid. However, he warned that the potential impact of the Delta variant, and other variants that may come along, are not yet known.

Mr Reid added that nearly 3.8 million doses of Covid-19 vaccines have been administered so far in Ireland, with another 300,000 due to be administered this week.

So far, 191,000 people aged 35-39 have registered for their Covid-19 vaccine. The HSE said today that there is no date yet for when the registration portal will open for people aged 30-34 as it wants to see uptake in the other group first.

Although dependent on supply, it is estimated that the last vaccines administered to adults are likely to be in late September or early October.

"It is going to go up… there's no way we would be any different to other countries in seeing this take off"@CcoHse says there are now 210 cases of the Delta variant in Ireland, adding that while it accounts for around 20% of new cases, that will go up | https://t.co/ZbZhHgcHLQ pic.twitter.com/cv4nnn2EYW

Dr Henry also told today's briefing that 62% of eligible adults have received a first dose of a vaccine, while 37% are fully vaccinated.

Those who are awaiting a second dose of the AstraZeneca vaccine are due to be completed on the week beginning 19 July.

Dr Henry said that there have been no outbreaks of the virus in Ireland across nursing homes, acute hospitals and county hospitals over the past week.

"We are certainly in a much stronger position now"

.@paulreiddublin says people do not yet know the potential impact of the Delta variant, but that with vaccines people have "very strong protection" | More: https://t.co/ZbZhHgcHLQ pic.twitter.com/33rFRAV9wu

Anne O'Connor, the HSE Chief Operations Officer, said today that there has been a 49% reduction in vacant beds in hospitals and that people are having longer stays in hospitals.

She said calls to the National Ambulance service are higher than expected and they were dealing with more trauma cases as there are more accidents due to more people being out and about and more people engaging in DIY.

Overall she said emergency departments are seeing much higher activity.

Since the cyber attack there has been progress in restoring community services such as audiology, orthodontics, the pre-school and primary immunisation programmes and the civil registration service for births deaths and marriages.

However she said older person, disability and mental health services were still restricted.