On 1 June, it will be four months since a military coup overthrew Myanmar's elected government.

Tens years of democratic reforms have been upended and bloody attempts to silence opposition have shocked the world.

Those on the front line attempting to stand up to the regime are trying to delicately navigate through a new life of protest and safety.

While pro-democracy demonstrations have mostly left the streets, the movement against the junta exists through other means of expression in other realms.

In particular, it has made being an artist in Myanmar a dangerous business.

Raven is one of many artists in Myanmar’s largest city Yangon who have been using art as a weapon against the country’s ruling junta, by exploring a digital canvas to showcase political messages against the February coup.

Protests through paint, illustrations, images and words are a more secure place of demonstration, away from the violence on the streets.

However, that is not to say it doesn’t come with its own risks. The sheer level and reach of this expression caught those in power off guard which has led to a clampdown to squeeze out any opposition voices.

According to artists in Myanmar, art studios have been burnt down and state-sponsored news channels broadcast arrest warrant lists regularly that include influencers, actors, film makers, artists and graphic designers.

The New York Times has reported that four poets have been killed and dozens imprisoned in the last couple of months.

Poet Khet Thi, whose work declared resistance to the military, died in detention recently. His family said that his body was returned with the organs removed.

Raven has a reluctance to give anything away about herself, out of fear for her safety.

While working a full-time job she has been leading a double life, shielding herself online by using a fake name so she can "work harder and longer".

She said: "I have been protesting physically on the streets, but when the shooting became serious and brutal, I kind of stopped going outside in person.

"I've been illustrating a lot of stuff every day…listening to people listening to their stories, their ideas and trying to illustrate them and spread the message because it's the only thing you know I can do."

Demonstrations against the coup have been the largest and bloodiest in decades.

Myanmar was ruled by the armed forces from 1962 until 2011, when a new government began ushering in a return to civilian rule.

However in February, the junta seized control again following a general election in which Aung San Suu Kyi's NLD party won by a landslide.

It was a vote the military claimed was rigged. Hundreds of people, including children, have been killed in the last four months.

While the streets have become too risky for protest, the pro-democracy movement continues to live through art in the online world.

The Hunger Games' three-fingered salute has become one of the major symbols, a defiant pose that gripped demonstrators from the beginning with interpretations of the move making its way through digital art.

"Our objective is trying to reflect the people's voices as much as we can so that other people see it, hear it, because not everybody can go out" said Nyi Maw, a Myanmar filmmaker.

He continued: "[The three-fingered salute] is a symbol that people can hold onto. It aligns with the people who in the beginning were demanding the three main objectives: to get democracy, to release the leaders, and to give the people's power back to the people".

Red, the colour of danger, anger and violence, floods most of the imagery.

Art collectives like the Raise Three Fingers group in Yangon have been founded through the frustration by artists and creatives - hoping to bring the global art community together and highlight the crisis happening in the country.

"Clearly art has some kind of power, right? Because it's causing some kind of fear in the eyes of the junta" said a representative from the group to RTÉ News, who is also on the call with Raven.

"We know that art is powerful because it transcends language", they said.

"It can, it's emotional. It can get people to act. You don't need words, right? Anyone can feel moved by a piece of art you might ask", they added.

The Raise Three Fingers (RTF) group lives online with creatives posting their work anonymously from countries around the world, in solidarity with the movement. 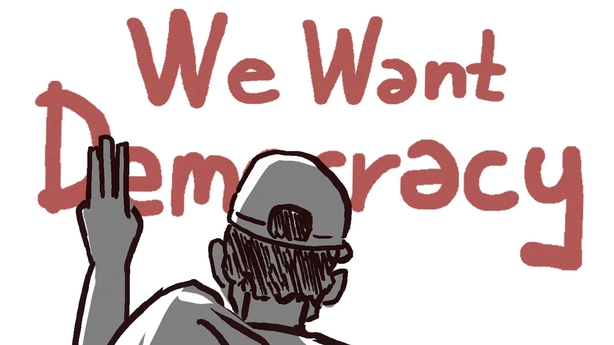 TikTok, Facebook, Twitter and Instagram have served as platforms to spread their message far and wide, allowing this movement and many others, to grow, flourish and connect with users globally.

They say access to the world at their finger trips has helped keep the situation in Myanmar on people’s agenda.

It is what separates it radically from the previously pro-democracy movements that have come before in Myanmar.

Unlike the revolutions of 1988 and 2007, the current protests in Myanmar are being led by a digitally savvy generation using hashtags, memes, visual graphics and social media to fight and shape the direction of the movement on a day-to-day basis.

More than a decade ago SIM cards were exceptionally expensive, but after a series of reforms in the country during Aung San Suu Kyi’s time in government, this opened up the digital domain to the people of Myanmar.

"There are figures to show that there are more SIM cards than people in Myanmar. In fact, Facebook is the internet in Myanmar and that's the way in which people, particularly the young, process news", Vijaya Nidadavolu, a gender and development specialist who recently worked in the country, told RTÉ News.

Even now with regular patchy internet access, creatives have the ability to organise, engage and spread the message online across interactive communities.

They can paint, draw, sculpt, animate, sing or dance and share works instantly within their networks through digital platforms.

"The revolutions in 1988 and 2007 was very different because we didn't have this type of access to the Internet. But now it feels like the playing field is different because since day one of the coup, we saw that there was a huge outpouring of art. People were able to like organise protests around a certain theme and get people together", said the RTF spokesperson in Yangon.

This online world of protest has also opened up the movement to more diverse voices.

Iconography surrounding other political mobilisations revolved solely around the figure of politician Aung San Suu Kyi, who became famous in the late 1980s for campaigning to restore democracy.

Posters, calendars and billboards all carried her image prominently as a symbol of hope as she spent nearly 15 years in detention between 1989 and 2010, after organising rallies calling for democratic reform and free elections.

"There was no alternative imagery in the public domain," said Vijaya Nidadavolu. 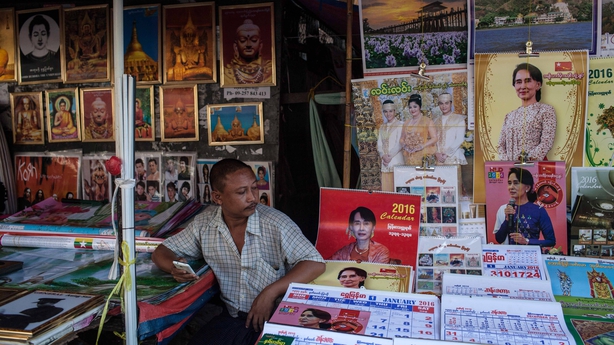 "The current protests have enabled a diverse set of other voices to express themselves and seize the political space, including through art. Aung San Suu Kyi’s image is not the only visible symbol of protest. People are rallying around a diversity of images and iconography, which is a defining feature of the current protest", Ms Nidadavolu added.

That changing political landscape can be seen in the art that has been produced and floods the Raise Three Fingers website.

"It's making room for diversity and inclusion and reparations for a lot of communities, including for the Rohingya communities" said the Raise Three Fingers spokesperson.

"So I think people are making different demands. It's not just about get rid of the dictatorship, we want democracy. We want a better democracy because the democracy we had before failed us", they said.

According to the RTF, Generation Z have been the most active as they have known nothing other than a country moving towards a free nation.

It’s in stark contrast to other age groups who have only gotten a taste of life outside a dictatorship, some of whom are disappointed with Aung San Suu Kyi's record and are still haunted by previous regimes.

"We want this to be the last generation under a dictatorship because we're sick of it quite frankly. For even young adults like me, it just feels like you have to do something because you don't want to go through this anymore", they said.

However, four months since the military coup, the junta still holds a tight grip on the Myanmar and Aung San Suu Kyi remains detained after being hit with a string of criminal charges including flouting coronavirus restrictions during last year's election campaign and possessing unlicensed walkie-talkies.

Social media may offer an alternative reality and solace for those who are trying to keep the pro-democracy movement alive as life on the streets of Yangon and elsewhere are still very different and difficult.

The spokesperson from RTF said: "I feel like I was more confined than during Covid. At least during Covid, if I had my mask on and I was keeping safe, I could go out [and] see friends. But now you know I'll go to the grocery store and I'll visit my parents house and that's about it.

"For for some people life has returned to normal. I see people eating at restaurants."

Many are living with a constant fear of being arrested.

"They're still stopping people checking cars in this street, and there is a feeling of constant anxiety, knowing that you could be arrested at any moment for everything. For having a phone, for having social media accounts" they added.

For Raven, she still puts her pen to digital paper every day with the hope that her images will keep the spirit of the movement alive.

"I definitely believe that we're going to win because we have to. Otherwise it will never win" she said.