The Department of Health has been notified of 557 further cases of Covid-19, while 17 further deaths have been recorded.

The number in ICU stands at 83, which is down five from yesterday.

Nine of the deaths announced today occurred this month, while four occurred last month, and another four in January or earlier. Those who died ranged in age from 51 to 94.

Geographically, 229 cases were confirmed in Dublin, 58 were in Kildare, 34 in Donegal, 31 in Meath, 24 in Tipperary and the remaining 181 cases were spread across all other counties.

As of 8am this morning, there were 350 patients with Covid-19 in Irish hospitals. 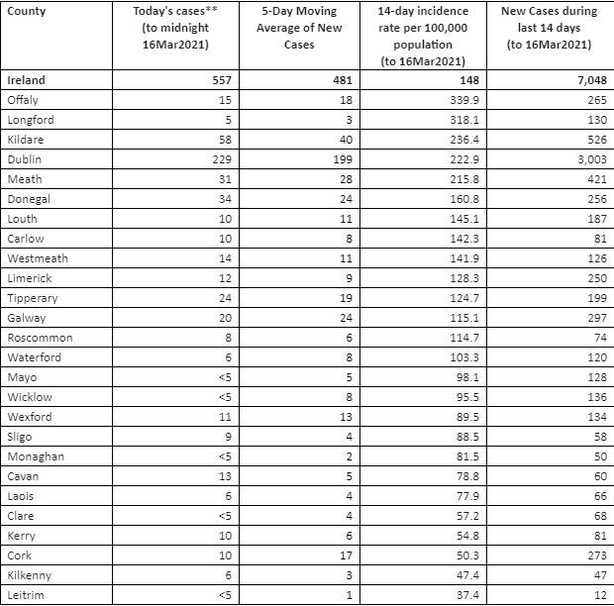 It comes as latest figures from the Health Products Regulatory Authority show there have been 3,484 reports of suspected side effects relating to Covid-19 vaccines in Ireland.

The agency that monitors the safety of medicines said that the most commonly reported side effects are in line with those typically associated with vaccination such as headache, muscle pain, or nausea.

It said there have been no reports of the type described by the Norwegian Medicines Agency.

The suspected side effects reported are out of more than 409,500 doses administered and cover the period up to late last month, were mild to moderate in nature, and had resolved at the time of reporting.

The agency has received less than five reports associated with blood clots, but none of the nature seen in Norway.

More than 2,500 of the reported side effects have been with mRNA vaccines. Almost 76% of vaccines administered here are the mRNA Pfizer-BioNTech, or Moderna vaccines.

Just 954 reported side effects have been associated with the AstraZeneca vaccine. Almost 21% of vaccines administered in Ireland have been AstraZeneca.

It said that each case is carefully reviewed.

The HPRA said that the safety of the public is of the utmost importance and that reports of potential safety concerns, even if rare, are vigorously and swiftly investigated.

The number of people in the very high risk category who received the Covid-19 vaccine last week was 4,157, according to latest figures from the HSE.

The HSE had indicated that it hoped to vaccinate 10,000 of this Category 4 group up to last Sunday. Some planned vaccinations for Sunday were affected by the decision to suspend the AstraZeneca vaccine from that day.

.@rtenews So far, Ireland has received 758,490 Covid-19 vaccines. As of last Sunday, 617,050 had been used. A buffer is held back for the second dose & around 95% of available vaccines are administered within seven days of arrival here, the Department of Health said today.

Meanwhile, the number of Covid-19 outbreaks fell last week, including a marked reduction in the number seen in private houses.

The overall number of outbreaks for the week to last Saturday was 339, down 89 on the previous week. 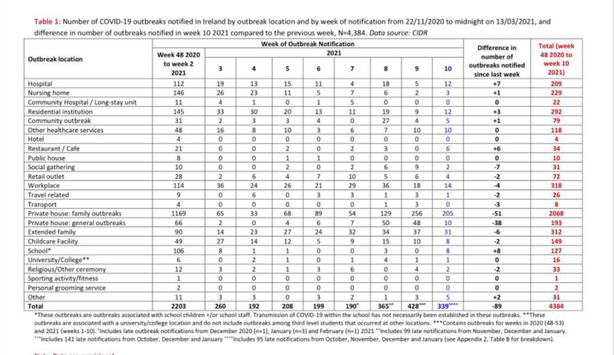 An outbreak is two or more linked cases of Covid-19.

There were eight outbreaks reported in schools, compared to none the previous week. A small increase was also seen in outbreaks in hospitals and nursing homes.