Iran has claimed that Israel and an exiled opposition group used new and "complex" methods to assassinate its leading nuclear scientist.

Without citing sources, Fars news agency said the attack had been carried out with the help of "a remote-controlled automatic machine gun" mounted on a pickup truck.

It comes as the funeral of Mohsen Fakhrizadeh - seen by Israel as the "father" of Iran's nuclear weapons programme - took place.

He died from wounds sustained after assailants targeted his car outside Tehran on Friday, according to the defence ministry.

Iran's top security official, Rear-Admiral Ali Shamkhani of the Supreme National Security Council, said the "operation was very complex, using electronic equipment and no one was present at the scene".

The People's Mujahedeen of Iran (MEK) were "certainly" involved, along with "the Zionist regime and the Mossad", he said in video interviews, referring to the Israeli government and its spy agency.

Mr Hatami had said that Mr Fakhrizadeh was one of his deputies and headed the ministry's Defence Research and Innovation Organisation, focusing on the field of "nuclear defence."

In his speech, he said the government has decided to double the organisation's budget to continue Mr Fakhrizadeh's path "vigorously."

A large display showed a picture of Mr Fakhrizadeh next to Iran's supreme leader Ayatollah Ali Khamenei, as well as former top general Qasem Soleimani, who was killed in a January air strike by the US in Baghdad.

He was buried at Imamzadeh Saleh, an important Shia shrine in northern Tehran. 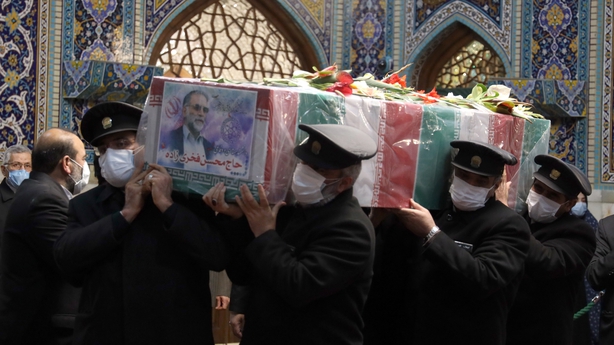 The assassination has led to demands for a strong response from the Iranian leadership and calls by some to avoid entering potential negotiations with the United States, even as the presidency of Donald Trump draws to a close.

Iran's parliament yesterday demanded a halt to international inspections of nuclear sites in the country, a step that could prove a fatal blow to the nuclear deal the Islamic Republic agreed with world powers in 2015.

Mr Trump withdrew from the Iran nuclear deal in 2018 and began reimposing and reinforcing crippling sanctions, but President-elect Joe Biden has promised a return to diplomacy.

Mr Rouhani has emphasised that the country will seek its revenge for the assassination in "due time" and not be rushed into a "trap."