New Zealand's Prime Minister Jacinda Ardern has retained the restrictions put in place to beat the spread of the coronavirus until at least 14 September, as the country reported a new death related to the virus.

Auckland, the country's largest city and the centre of a fresh outbreak, will remain on alert level 2.5, which limits gatherings to no more than ten people.

"The best economic response remains a strong health response. If we get it right we will ultimately shake off restrictions faster and lessen the risk of bouncing around," Ms Ardern told a news conference.

Other parts of the country will be under alert level 2, which requires people to observe social distancing rules and restricts gathering sizes to no more than 100 people.

New Zealand's health ministry said a man in his 50s had died in an Auckland hospital due to Covid-19. He was linked to a known Auckland cluster and was in intensive care for the last few days.

His death takes the number of Covid-19 related fatalities in the country to 23.

The Pacific nation of five million people appeared to have succeeded in halting community transmission of Covid-19, but Auckland's fresh outbreak prompted the government to place the city back in lockdown last month.

The lockdown was mostly lifted on Sunday, allowing schools and offices to reopen, although masks are mandatory on public transport across the country.

Since the first case came to light on 26 February, Brazil has registered more than 4.04 million infections and over 124,600 deaths, second only to the United States. 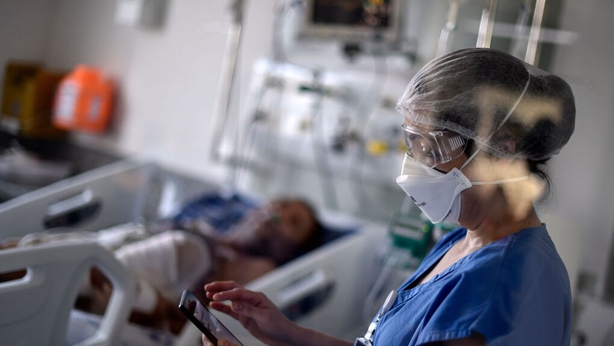 The health ministry said the number of infections were slightly reducing in recent days amid hopes that the pandemic had peaked following months when the daily average of deaths was over 1,000.

Since the end of August, Brazil has averaged around 870 Covid-19 fatalities with 40,000 new infections a day.

"This is the beginning of what we hope is in fact an improving trend," said Mauricio Sanchez, an epidemiologist at Brasilia University.

However, he warned the trend was "very timid" and said the slowdown in cases should be maintained for two or three weeks to be able to draw any firm conclusions.

In such a vast country, the national curve could be skewed by what was in effect "27 different epidemics," he said, referring to Brazil's states.

Brazil has recorded a death rate of 589 per million inhabitants, but there is a huge difference between the figures in the north (746) and the south (309).

Last Sunday, the beaches of Rio de Janeiro were crowded with people without masks. Many Brazilian cities are currently studying how and when to reopen schools.

Brazil's containment strategy has been hampered by the lack of a coordinated approach as President Jair Bolsonaro has often argued against measures taken by state governors.

Even though he contracted the virus himself, Mr Bolsonaro has continued to encourage his supporters to gather at his official engagements, even shaking hands with some despite not wearing a face mask.

He has often repeated his belief that Brazil's economic collapse would be worse than the effects of the virus.

Mr Bolsonaro's has twice changed his health minister after disagreements over how to tackle the pandemic and his promotion of anti-malarial drug hydroxychloroquine as a treatment, despite scientists warning there is no proof it could be effective.

Brazil has suffered a record contraction of its economy, and the loss of nine million jobs.