At least six people were killed by Hurricane Laura in Louisiana as the remnants of the storm moved on to Arkansas this morning.

Now a tropical depression, Laura had proved less damaging than feared, despite arriving in Louisiana this week as one of the most powerful hurricanes recorded in the United States.

The storm killed at least six people in Louisiana, including four who were killed when trees fell into homes.

Of the other two deaths, health authorities said, one man died of carbon monoxide poisoning from a generator in his house, and another man drowned when the boat he was in sank during the storm.

The storm damaged buildings in Louisiana and Texas and knocked out power for hundreds of thousands of residents.

US President Donald Trump is expected to head to the Gulf Coast over the weekend to survey the damage.

The storm was forecast to drop heavy rain over Arkansas, Mississippi, Alabama, Tennessee, Missouri and Kentucky as it headed out to the east coast, the US National Weather Service said.

At its peak upon making landfall yesterday morning, Laura had maximum sustained winds of 241km per hour (150mph), faster than even Hurricane Katrina, which sparked deadly levee breaches in New Orleans in 2005 after arriving with wind speeds of 201km (125mph).

Hurricane Katrina, which left 1,800 people dead, was a Category 3 storm when it made landfall.

Only one storm has made landfall in Louisiana with wind speeds as high as Laura - the Last Island hurricane of 1856, which left hundreds dead.

What would have been a dangerous 20ft storm surge that forecasters had predicted could move 64km inland was avoided when Laura tacked east just before landfall, Louisiana Governor John Bel Edwards said.

That meant an enormous gush of water was not fully pushed up the Calcasieu Ship Channel, which would have given the storm surge an easy path far inland.

"I'm concerned that as we continue to go out and do primary and secondary search and rescue, we're going to find more fatalities," Mr Edwards said. "I hope not and pray not."

He said there were about 600,000 power outages across the state and water services had also suffered some damage. "We have a lot of work to do," he said.

Mr Edwards also said residents living near a chemical plant near Lake Charles where there was a chlorine gas fire had been told to shelter in place.

The governor said storm surge "did not materialise to the degree that it had been forecasted" - although it may have reached as high as 15ft in some places. 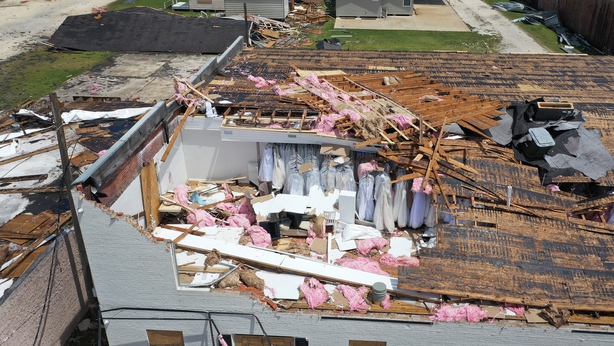 The National Hurricane Center had warned of an "unsurvivable" storm surge of up to 20 feet, and evacuation orders had been issued for hundreds of thousands of Louisiana and Texas residents.

In Lake Charles, most of the windows of the Capitol One Bank Tower skyscraper were blown out by ferocious gusts that also uprooted trees, power pylons and road signs.

Emergency responders, as well as the National Guard and state wildlife law enforcement officers were helping to evacuate people who had been in Laura's path.

"Last night was terrifying because we heard a lot of banging, and the apartment was shaking left and right, and we just heard basically loud noises everywhere," Lake Charles resident Caleb Davis said. 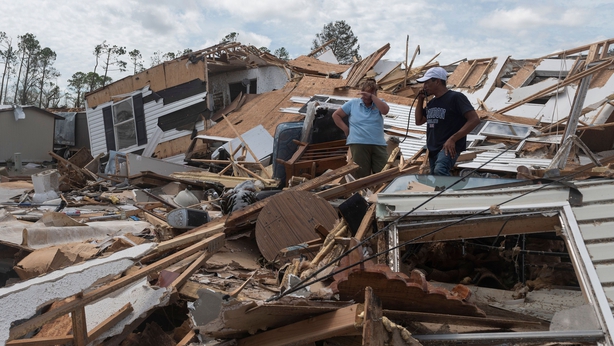 Wildlife enforcement sergeant Mason Spillman expressed relief, however, that the damage was not as bad as forecast.

"I do not want to downplay it at all, it's a terrible storm, a lot of people have lost a lot of things," he said.

"But we are thankful that it didn't flood, and we're not making water rescues, swift water rescues or things of that nature."

The Atlantic storm season, which runs through November, could be one of the busiest ever this year, with the NHC predicting as many as 25 named storms. Laura is the 12th so far.