Teacher Emer O'Neill has not been able as yet to watch the video that shows George Floyd’s last moments alive.

"It brings too much pain to even think of what happened to him let alone actually bear witness to it", she says.

Emer has a unique perspective on the anti-racism protest movement that has erupted in the US, and its knock-on effect here.

As a black Irishwomen in her 30s, she lived for 10 years in the states.

She did her teacher training there and worked there too as a teacher for a number of years.

Now she is back home and teaching at Wicklow Educate Together Secondary School.

I met Emer at her school last year. After years covering education as a journalist, she is the first black teacher I have ever met in an Irish school.

When I tell her this, she laughs, "I’m the first black teacher I’ve ever met in Ireland too!" she says.

No formal record is kept of teacher ethnicity here but there appears to be no more than a handful of people of colour working as teachers in Irish schools.

When it comes to students our classrooms have never been more ethnically diverse, but that diversity is starkly absent at the top of the classroom. 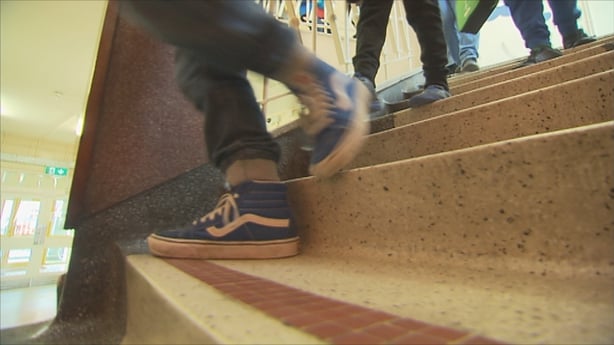 It is a programme that encourages and supports migrants who wish to enter the profession here.

He blames a number of factors for the lack of diversity in teaching.

He explains: "Recruitment into teaching is very conservative.

"Many school principals and Boards of Management when they are recruiting a teacher are looking for someone who will 'fit in’ and not rattle things or present a challenge.

Dr McDaid says this has to change, with diversity comes difference and that can be enriching, "It’s about understanding that it’s a good thing to shake up the status quo", he says.

He says that there are very good examples however of schools striving for this kind of change and certainly teachers like Emer O’Neill have nothing but praise for the schools they are working in.

So why is it so important to have ethnic diversity in teaching? The phrase "if you can’t see it you can’t be it" encapsulates one reason.

Emer talks about her own five-year-old son, a little boy who has told his mother that he wants to be white like his dad.

"When he comes home to me, the people in authority, the people he looks up to, they are all white people.

"That can cause havoc with a mind. He is only five but he notices these things".

Emer is glad that students at her school, of all ethnicities and backgrounds, see her in the corridor, even if she does not teach them directly.

She tells a story about a white student who asked her why he is not allowed to say the ‘n’ word when the black people he sees on TV or listens to in songs can.

She was not sure if this teenage boy was just trying to provoke her, as teenagers will, but a lengthy conversation about the history of slavery in the US ensued.

And she says that the student became fascinated and understood.

Alex Mbowoua is another teacher who is black. In her early 20s, she is just starting out as a primary school teacher, working at another Educate Together school, Canal Way in Dublin.

The impact of events in the US, especially on social media, has left Alex feeling completely overwhelmed.

"And I’m trying not to look at social media."

Alex loves teaching and feels at home in her school but getting this far was a struggle.

As the only black undergraduate student at her teacher training college she felt isolated.

"It was such a shock", she says, "because nobody looked like me".

When I ask her what advice she would give to young minority people who may be considering teaching she laughs and says "please do it. For me! I don’t want to be the only one."

"Just keep going", she says seriously. "It’s really hard but don’t let anybody tell you what you can or can’t be".

And she has practical advice too: "Don’t drop down to pass Irish", she says. "Because if you drop down you can’t become a primary school teacher. In school, my teacher told me to drop down but my Mom she knew the points system, she went in and said ‘she is not dropping’, and I got a B2". 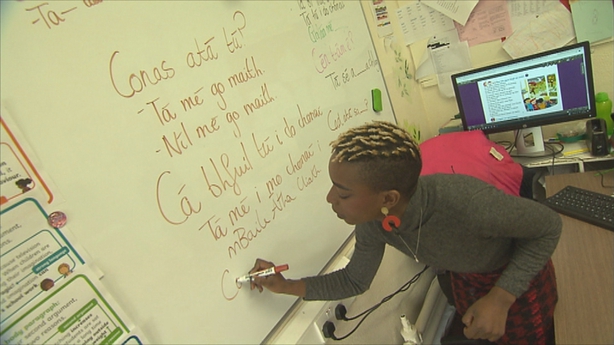 Alex’s mum, originally from Cameroon, is also a teacher.

For those from minority backgrounds of all kinds the barriers to becoming a teacher include a financial one.

Dr McDaid points to the six years it now takes to become a second-level teacher.

"That’s a huge investment of time, and money", he says.

"Especially when you don’t have a great degree of certainty that you will get a job. From a social class point of view is that a chance you are going to take?"

Like Emer, Alex feels that the presence of ethnic diversity in a school benefits all children. She feels her pupils who have parents who are not Irish, regardless of their ethnicity, like the fact that they have this in common with their teacher. Their parents too, she says.

And it’s good for all children, of all ethnicities, to see people of colour in positions of authority, says Race Relations Consultant Dr Ebun Joseph.

"We are never going back to being a monoculture", she says "and we disadvantage our white children when they are not exposed to people of colour in management or other senior positions".

The events of the past weeks, both in the states and here, have impacted hugely on the lives of Alex and Emer.

Both express the strong view, but in different ways, that active antiracism is what is needed.

Both also speak of feeling overwhelmed and emotionally drained by events.

Alex says she feels overwhelmed by what she characterises as "noise" on social media in response to the Black Lives Matter movement. 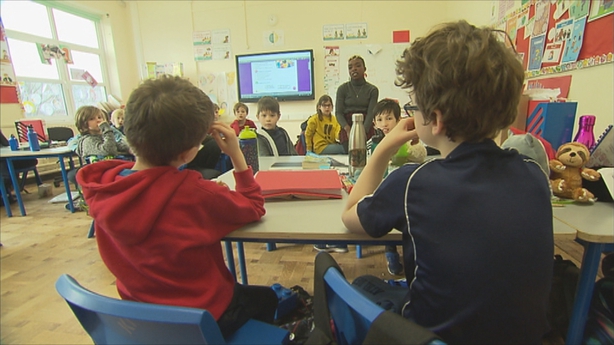 I'm really upset by it", she says "It’s like a trend almost now", she says, expressing a fear that some people’s expressions of support For Black Lives Matter may just be shallow lip service.

Emer feels that the movement in the US has given her strength to speak out.

She decided to speak out on social media about her own experience of racism here. She says she had to "work up the courage" to do so.

She is heartened by the Black Lives Matter protest that took place here on Monday, and by the predominantly young people who took part.

"It’s amazing. It’s a credit to them", she says "A lot of people say that they are not racist but that's not good enough. You need to be vocally and openly anti racist."