New figures show that the number of patients in hospitals confirmed as having Covid-19 has reduced.

The new HSE report shows there are 770 confirmed cases, as well as 320 suspected cases in hospitals that are waiting for their test results.

The acute hospitals with the most confirmed cases are in Dublin.

Elsewhere, Limerick University Hospital has 33 confirmed cases, Mayo also has 33 and Our Lady of Lourdes in Drogheda has 31.

There are 132 confirmed cases in critical care beds around the country.

It means that hospital critical care units still have capacity for 133 patients.

The figures cover the situation up to last night.

Minister for Health Simon Harris has pleaded with people to "stay the course" for the next couple of weeks and do all they can to suppress the spread of Covid-19 . 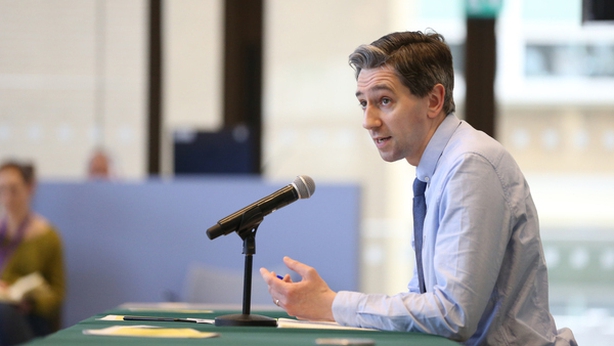 But he added the virus will grow again when restrictions are eased so getting the rate of transmission as low as possible ahead of this will be vital to ensuring the health service can cope.

Mr Harris said there will be some trial and error in the months ahead because the re-opening of Ireland will be a "'real balancing act."

By the end of this month, he said, the Government would publish a road map aimed at getting Ireland open again but no one should think that on the 5 May, it will be back to normal.

Mr Harris said overall Ireland is doing well and is in a much-improved position.

Meanwhile, Minister for Finance Paschal Donohoe has said he believes there will be an improvement in economic activity in the second half of this year and the economic measures introduced at the moment cannot continue indefinitely.

Speaking on RTÉ's Morning Ireland Mr Donohoe said that at the end of the 12 week introduction period he will be "tapering and changing" the Covid-19 pandemic welfare subsidies.

He said that the welfare subsidies "cannot be sustained indefinitely but they can be sustained for long enough to allow incomes to be protected "for as long as possible" and the Government wants to give the 40,000 companies availing of the Wage Subsidy Scheme "a fighting chance".

Mr Donohoe said the government wants to avoid cutting core social welfare rates and wants to protect public pay - but this is contingent on the global economy and Covid-19.

He added that confidence in public health will underpin how economic re-growth is achieved.

Yesterday, the Department of Health announced that a further 44 people who had been diagnosed with Covid-19 have died, bringing the total number of deaths in the Republic to 730.

One death that had previously been reported is no longer classified as related to the coronavirus.

Of the deaths reported yesterday, 82% had an underlying condition.

The number of additional cases of the virus diagnosed here is 388, bringing the total number of cases here to 16,040.

In relation to those who have recovered, Dr Holohan said 8,377 had recovered in the community, while 856 had been discharged from hospital.

Dr Holohan said there cannot be any "taking the foot off the gas" as we approach 5 May. He said it should not be a foregone conclusion that restrictions will be changed on 5 May.