A wave of anti-foreign sentiment is sweeping China, as non-Chinese nationals are blamed for reintroducing Covid-19 into the country, Yvonne Murray reports from Beijing.

In a video circulated online, a man of African origin holds up a sign he has just been handed in a branch of McDonald's, in the southern Chinese city of Guangzhou.

"We've been informed that from now on black people are not allowed to enter the restaurant," the sign reads.

"For the sake of your health consciously notify the local police for medical isolation, please understand the inconvenience caused," it reads.

McDonald's issued an apology and removed the notice.

In another video, a woman of African origin is seen being waved away from the entrance to a shopping mall, while other customers are allowed to enter.

African expats in China frequently encounter racism but in recent weeks, they have been stigmatized for spreading the coronavirus.

It began with news reports of a man of African origin who reportedly went to a restaurant in Guangzhou where he infected several people with Covid-19. Another report detailed a man who attacked a health worker.

As a result, African expats were required to undergo stricter testing and quarantine procedures. Several were evicted from their rented homes and refused entry to hotels.

Images of homeless Africans sleeping on the streets of Guangzhou caused outrage in their home countries. 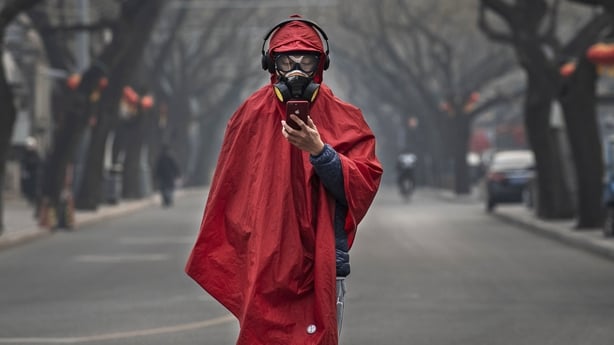 Chinese ambassadors were summoned for questioning while the ambassadors to Beijing of several African nations wrote a disgruntled letter to China's Minister of Foreign Affairs, Wang Yi.

The Chinese authorities moved quickly to smooth things over.

After all, China-Africa bilateral trade is worth billions of dollars. China also leans heavily on the support of African nations in international institutions like the United Nations.

It’s difficult to predict whether the incident will damage the relationship in the long term.

But in China, it’s part of a larger wave of xenophobia which has seen non-Chinese nationals blamed for reintroducing the coronavirus.

It is clear from online chat groups and from my conversations with locals here in Beijing, that many Chinese citizens believe that their own government took the right action at the right time to bring the infection under control, while other countries, particularly western democracies, failed utterly.

As the rate of local infections dropped in China, imported cases began to account for the biggest daily increase. But China closed its borders to foreign passport holders on 28 March.

All of the imported cases since then have been among returning Chinese citizens – a key detail that is often overlooked in media reports and online discussions.

The focus on imported cases as the main source of infection plus the coverage of soaring death rates in Europe and America have fuelled the notion that foreigners are dangerous.

"I was walking down the street last night," said Sean Bolster, a businessman from Westport, Co Mayo, who lives in Guangzhou, "when two different individuals saw my foreign face, shrieked in fear and made a beeline to cross the road."

"Today a woman refused to let me in the elevator because I'm a foreigner," he added, "even though she knows I’ve lived in this building for years."

"Later as I queued up in a bakery, a woman turned around," he said, "saw me, jumped and scrambled to get away from me, pulling her boyfriend away and muttering 'foreigner'."

Mr Bolster, who has lived in China for 18 years, said he has not experienced this kind of treatment before. "It’s happening every day here," he said, "but I just grin and bear it underneath my mask!"

In Beijing, some hairdressers, restaurants and gyms are open only to Chinese nationals and there have been incidents of taxi drivers on ride-hailing apps cancelling orders, once they realise it has been placed by a foreigner.

There is a feeling among some locals that foreigners do not obey China’s virus-prevention measures. Stories about non-Chinese nationals out in public with no masks, for example, are popular online.

On the Chinese messaging app, WeChat, memes stoking fear of foreigners are being circulated. One cartoon depicts foreigners being dragged to a row of bins for "sorting".

In the cartoon, a man in a hazmat suits says: "let me see what rubbish we have here".

Read more:
China scrambles to stop rise in imported Covid-19 cases
First coronavirus death outside China as toll reaches 304
Italy's participation in China's grand plan is a major coup for Beijing - but not everyone is convinced

The cartoon strip lists the alleged crimes of the foreign trash - all of which are hot topics on the microblogging site Weibo - such as "sneaking into China to avoid the pandemic elsewhere", and "pretending to be a friend of China, whilst writing bad things about the country online", or "going for a jog during quarantine without a mask on".

Eventually the foreign trash gets sprayed with disinfectant and thrown into one of the bins. The man in a hazmat suit declares one foreigner to have a "heart covered with pig lard".

He ends up in the household waste bin. Interestingly, much of the anti-foreigner vitriol has not been scrubbed from the Chinese internet, suggesting that the authorities don’t have much of a problem with it.

Of course, people of Chinese origin in Europe and elsewhere have been on the receiving end of serious coronavirus-related abuse since the outbreak began, in January. People were physically attacked and cursed at. Chinese restaurants were boycotted and Asian supermarkets emptied out.

Now as the pandemic takes its toll across the world, China is facing mounting criticism over its handling of the initial outbreak.

In response, Chinese state media has accused western governments of trying to deflect from their own failures by scapegoating China.

And an aggressive campaign - often on social media platforms, like Twitter which is banned in China but widely used by Chinese government officials - is being waged to highlight China’s successes in handling the pandemic, while discrediting other countries.

This has been dubbed China’s "Wolf Warrior" diplomacy.

In March, the foreign ministry spokesman, Zhao Lijian, tweeted the conspiracy theory that the virus could have originated in the United States. This theory has substantial support inside China.

There is a concern, that souring relations between the Chinese Communist Party and other governments are likely to lead to an increase in ethno-nationalism here in China, as the government looks to shore up its support base at home.

Some people - mostly those who have lived in China for a long time and have seen anti-foreigner waves come and go - are fairly confident this one too will pass.

Others though, are beginning to feel very uncomfortable living in a post-pandemic China.