In Sungai Petani in Malaysia, residents were initially happy when companies once again began using the old industrial sites left behind by electronics companies who had departed for China in the 2000s.

But this wasn't the light industry that had previously occupied the business parks. The new companies were plastic recycling factories and they quickly made their impact felt.

"When I went jogging at night, I saw some smoke but I didn't know where it was coming from," says Jean Tei Thong, a local resident, "every time I went jogging I started to cough".

Then her six-year-old daughter, Ang Jia, started becoming unwell whenever she left the house and developed chronic bronchitis. 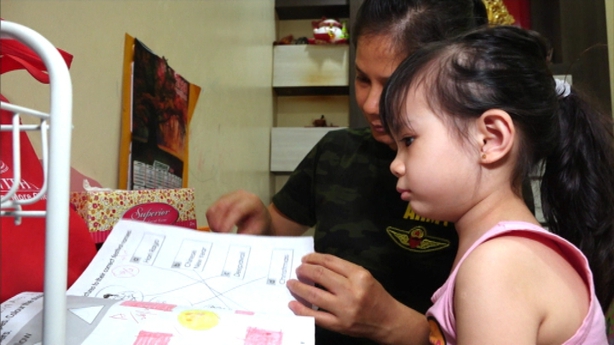 "From April to September she wasn't able to go to school," her mother says.

"In November she was admitted to hospital again. She had a lot of phlegm and started to cough up blood also. The doctors say it must be due to the environment...whatever is happening."

The Thong family were not alone in their experience.

Dr Tneoh Shen Jen is a doctor at the local hospital. Shortly after the factories arrived in the spring of 2019, he says more and more people began presenting with breathing difficulties.

"We noticed a 10-20% increase in the number of respiratory cases admitted to hospital," he says.

Local environmental activists believe the plastic-recycling factories that had arrived in Sungai Petani were owned by the same people who had been accused of the widespread dumping and burning of plastic waste in the Selangor region of Malaysia in previous months.

Those factories had been set up to take advantage of the need for a new market for Western plastic waste. Up until 2018, China had been the main destination for plastic waste from Europe, the US and elsewhere - but then Beijing announced it was halting the import of almost all foreign plastic waste including plastic recycling. It left the West with a massive problem - where would it send its plastic waste now?

Many countries in south east Asia, including Malaysia, moved to fill the vacuum and began taking in large amounts of plastic waste.

But the sheer volume of plastic waste left the recycling factories struggling to cope.

The waste quickly piled up and there was another more serious problem. Only a small amount of plastic is actually suitable to be recycled. Much of what was arriving in Malaysia was contaminated or unrecyclable.

This quickly led to mass dumping and burning. One small town, Jenjarom, made international headlines when the scale of the dumping there was revealed.

Malaysian authorities moved to clean up the dumpsites - and close down the rogue factories, and that is when activists say they began moving further north - to towns like Sungai Petani.

Locals began complaining about the smell, the smoke and the overall deterioration in air quality.

"A lot of the factories, they opened them without the required permits," says Dr Tneoh, "so about 20 of them got sealed...and they were not allowed to operate...but they continued to operate at night.

"Even though they were raided and they got fined, they were so profitable the fines did not deter them or stop them from operating."

Instead the factories became more covert in their operations.

"After we made so much complaints," says Dr Tneoh, "they moved one of the dumps to around halfway out of town and this dump was sitting on the banks of the river, Moda River, this river is where we draw out drinking water ... our household water."

Once the dump was discovered by activists and revealed to the media, authorities again moved in and closed it down.

But Dr Tneoh is far from reassured. Asked if he believes the local authorities have been listening to the concerns of residents, he says "not very much... because I think that the factories...the business owners of these factories are very close to the factory officials".

The air quality in the town has improved in recent weeks and no new illegal dumps have been discovered. However smoke can be seen emerging from deep in the jungle and local environmental activists say they believe the factories have simply moved the dumps and burning deeper into the countryside.

The mood in Sungai Petani is tense when we visit. Some residents tell us they don't want to be seen speaking to a foreign journalist.

There was a fire at one of the plastic factories recently and afterwards police arrested some of those who had been protesting against the dumping and burning.

Activists say they had nothing to do with the fire and suggest the arrests are an effective way to stop people from speaking out.

It may not matter for much longer. There are signs that the plastic recycling factories may soon be on the move again. One factory owner said he had been invited to move his operations to another poorer region further north.

Dr Tneoh says there's only one way to stop the cycle: "We have enough waste to recycle in Malaysia. We don't need to recycle foreign waste."

Reporter Joan O'Sullivan and cameraman Mark Ronaghan travelled to Malaysia courtesy of the Simon Cumbers fund to report on the problems caused by plastic waste there.