Three people have been arrested in connection with the seizure of more than €1.6 million worth of heroin and cocaine, as well as €700,000 in cash, during a number of searches in the Leinster area.

The searches were carried out over the past two days by gardaí targeting organised crime groups involved in money laundering, passport fraud and drug trafficking.

The Head of Special Crime Operations Assistant Commissioner John O'Driscoll says the arrests and seizures are part of the strategy to dismantle these gangs.

A 43-year-old Dutch national was arrested in the Dublin 4 area on suspicion of money laundering, after he was discovered to be in possession of an estimated €200,000 in cash.

During follow-up searches at a premises in the area, more cash and a number of gold bars were also seized.

The precise amount of cash is yet to be established by gardaí, as some of it was vacuum packed and is subject of technical examination. However it is estimated to exceed €500,000. 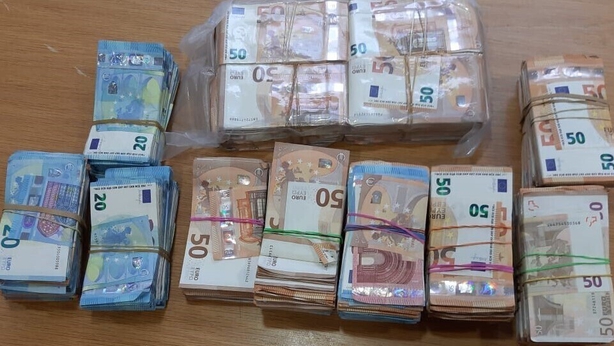 During a separate operation yesterday which targeted similar individuals involved in organised crime in the Dublin Metropolitan Region and in Co Meath, a vehicle was intercepted in the Kilinarden area of Tallaght.

Gardaí searched the vehicle and found a quantity of cocaine and another substance believed to be heroin.

The 24-year-old driver of the car was arrested on suspicion of possession of controlled drugs, and is currently being held at Tallaght Garda Station.

Gardaí say as a result of the seizure, follow-up searches were carried out at locations in Ashbourne and Ratoath, where €1.6m worth of suspected cocaine and heroin were seized.

Meanwhile earlier today, a 40-year-old Irish man was arrested in Dundalk in respect of a suspected breach of the Passport Act.

He is currently detained at Dundalk Garda Station.