Ukrainian authorities and Russia-backed separatists in the war-torn east of the country have begun a prisoner exchange in a frontline operation that has stirred controversy.

As part of the swap, Ukraine was expected to hand over to separatists several riot policemen suspected of killing protesters during a pro-Western uprising in 2014, in a move that sparked public anger.

"At the Mayorske checkpoint the process of releasing detained persons has begun," the official Twitter account of the Ukrainian presidency said.

It was still unclear how many people were involved in the exchange. A Ukrainian source told AFP that the parties were still verifying the lists of those being exchanged.

A representative of the separatist stronghold of Donetsk, Daria Morozova, said earlier that separatists would get 87 prisoners, while 55 people would be handed over to Ukraine.

Earlier today the two sides were seen preparing to exchange prisoners, with vehicles arriving near the village of Odradivka, some 10km from the self-proclaimed Donetsk People's Republic, an AFP correspondent reported from the scene.

The location was guarded by uniformed men with machine guns.

The December summit between the Russian and Ukraine leaders, mediated by France and Germany, was the first of its kind in three years.

The latest swap comes three months after Ukraine carried out a long-awaited exchange with Russia of 35 prisoners each.

The last major prisoner swap between Ukraine's government and separatists took place in 2017, with more than 230 separatists swapped for over 70 Ukrainians.

Ties between Ukraine and Russia were shredded after the bloody 2014 uprising ousted a Russian-backed regime.

Russia went on to annex Crimea and support insurgents in eastern Ukraine, who launched a bid for independence in 2014. Since then more than 13,000 people have been killed in the conflict.

The potential release of the riot police has raised concerns in Ukraine, with many fearing the country is being pushed to pay too high a price for the swap.

They are suspected to have been involved in the bloody crackdown on protesters in 2014. Some 100 demonstrators were shot dead during the uprising.

Ahead of the swap, Ukraine's prosecutor-general's office said that the trial of the five suspects would continue, warning the defendants would still have to appear in court. 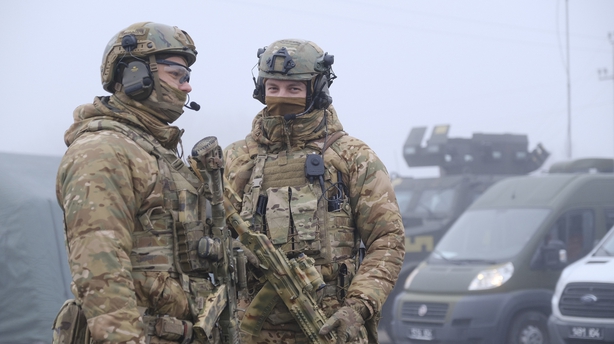 Three former riot policemen had earlier been released from custody while another two had been freed from house arrest.

Ahead of the swap, about 200 people protesting the release of the riot policemen gathered near the detention centre in the capital Kiev where the three suspects were held.

"This country has no future," Volodymyr Golodnyuk, the father of a 19-year protester who was killed in the uprising, said on Facebook.

In an open letter to Mr Zelensky, the victims' families warned the release of the suspects could lead to a "wave of protests".

Since coming to power in May, comedian-turned-president has sought to kickstart a peace process to end the conflict.

At the Paris summit, the leaders have sought to revive accords signed in Minsk in 2015 that call for the withdrawal of heavy weapons, the restoration of Ukraine's control over its borders, wider autonomy for Donetsk and Lugansk, and the holding of local elections.

Russia has sent signals that it is ready to work with Mr Zelensky, who Mr Putin has described as "likeable".

But there was no sign of warmth between the Ukrainian and Russian leaders in Paris and many doubt whether Mr Putin genuinely wants to settle the conflict.

Mr Putin said this month that if Kiev gets back control of the border in the east residents of separatist-held territories could be targeted.

"Well, I can imagine what will begin. There will be Srebrenica there, that's all," Mr Putin said, referring to the 1995 massacre during the Bosnian war.