Pope Francis has appealed for the abolition of nuclear weapons, as he spoke in one of only two cities hit by atomic bombs.

He paid tribute to the victims of the "unspeakable horror" of the Nagasaki bomb.

In a highly symbolic visit to the Japanese city, Pope Francis said the mere possession of nuclear arms was perverse and indefensible, adding that they were "not the answer" to a desire for security, peace and stability.

He restated his support for a 2017 treaty to ban nuclear weapons agreed by nearly two-thirds of UN members, but opposed by big nuclear powers who say it could undermine nuclear deterrence, which they credit with averting conventional war.

"The possession of nuclear and other weapons of mass destruction is not the answer (to longings for peace)," Pope Francis said, after having closed his eyes in prayer and lighting a candle in memory of the victims.

"Our world is marked by a perverse dichotomy that tries to defend and ensure stability and peace through a false sense of security sustained by a mentality of fear and mistrust," he said.

"Peace and international stability are incompatible with attempts to build upon the fear of mutual destruction or the threat of total annihilation."

The pontiff was speaking at Nagasaki's Atomic Bomb Hypocentre Park, the site of the bomb the US dropped on 9 August 1945, instantly killing 27,000 people. 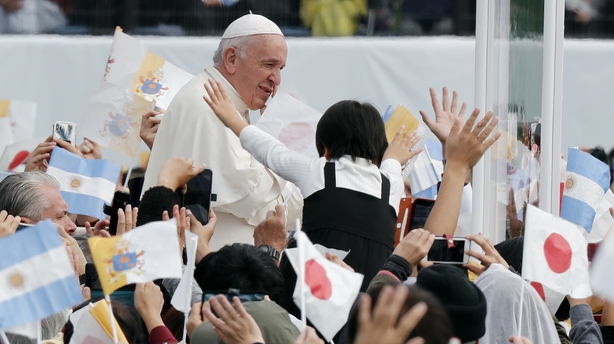 He also decried what he called a dismantling of non-proliferation pacts. Nagasaki was the second city hit by an atomic bomb during World War II.

Later, the pope visited Hiroshima, site of the first blast, which instantly killed about 78,000 people.

Survivors of that attack told Pope Francis of the "scene of hell" after the bombing, as they echoed his calls for the world to never forget the atrocity of the bombings.

Yoshiko Kajimoto was 14 years old when the bomb was dropped on Hiroshima on 6 August 1945.

"When I went outside, all the surrounding buildings were destroyed. It was dark as evening and smelled like rotten fish," she told the pope at the Peace Memorial in the city.

Her eyes closed tight and her voice trembling occasionally, she described people "walking side by side like ghosts, people whose whole body was so burnt that I could not tell the difference between men and women".

"No one in this world can imagine such a scene of hell," she added, recalling the days of white smoke that hung above the city as the victims were cremated. 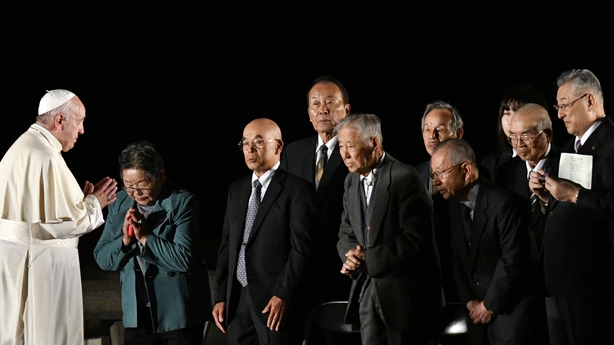 Ms Kajimoto found her father three days after the attack, but he died 18 months later from radiation exposure.

She told Francis her mother suffered illnesses from the atomic bomb for 20 years, and described her own battles with stomach cancer and leukaemia.

"I work hard to bear witness that we must not use such terrible atomic bombs again, nor let anyone in the world endure such suffering," she said.

In a speech at the Hiroshima peace memorial, the pope said he was humbled by the "strength and dignity" of the survivors.

"With deep conviction I wish once more to declare that the use of atomic energy for purposes of war is today, more than ever, a crime not only against the dignity of human beings, but against any possible future for our common home," he said.