The United Nations voiced alarm at reports that dozens of people may have been killed in Iranian demonstrations, as the Islamic republic said it would unblock the internet only once calm has been restored.

Amnesty International said the demonstrators were believed to have been killed across Iran in five days since security forces were ordered to "crush" the protests triggered by fuel price rises.

Iran's economy has been battered since May last year when the United States unilaterally withdrew from a 2015 nuclear agreement and reimposed crippling sanctions.

Iran's shock decision to increase fuel prices Friday sparked the protests in which authorities have confirmed at least five deaths, including three security personnel officials, who they said were stabbed and killed by "rioters".

The UN rights office said it was alarmed by reports that live ammunition was being used against protesters and had caused a "significant number of deaths across the country".

But its spokesman Rupert Colville cautioned that casualty details were hard to verify, in part because of a three-day-old internet shutdown.

"Iranian media and a number of other sources suggest dozens of people may have been killed and many people injured during protests in at least eight different provinces, with over 1,000 protesters arrested," he told reporters in Geneva.

"We urge the Iranian authorities and security forces to avoid the use of force to disperse peaceful assemblies."

Mr Colville also called on protesters to demonstrate peacefully, "without resorting to physical violence or destruction of property".

AFP journalists saw two petrol stations in Tehran gutted by fire and damage to infrastructure, including a police station. 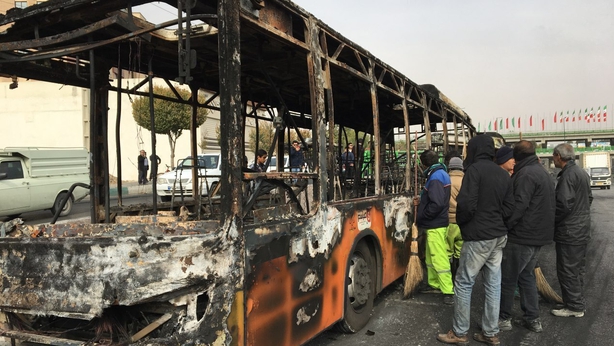 State television showed footage of rallies against "rioting" held in the northwestern city of Tabriz and in Shahr-e Kord, central Iran.

"Protesting is the people's right, rioting is the work of enemies," they chanted in Tabriz, according to Fars news agency.

When the demonstrations began on Friday, drivers stopped on major thoroughfares in Tehran to block traffic.

The protests soon turned violent and spread to more than 40 cities and towns, with banks, petrol stations and other public property set ablaze and shops looted.

London-based Amnesty said that "at least 106 protesters in 21 cities have been killed, according to credible reports", adding that "the real death toll may be much higher, with some reports suggesting as many as 200 have been killed".

"Authorities must end this brutal and deadly crackdown immediately," said Amnesty's Philip Luther, whose rights group based its report on "verified video footage, eyewitness testimony from people on the ground and information" from rights activists outside Iran.

Amnesty also urged Iranian authorities to "lift the near-total block on internet access designed to restrict the flow of information about the crackdown to the outside world".

It said video footage showed that "snipers have also shot into crowds of people from rooftops and, in one case, a helicopter".

For its part, state television, which rarely shows any signs of dissent, broadcast footage of masked young men clashing with security forces.

In a video aired Monday night, a man can be seen firing what appears to be an assault rifle as others hurl stones apparently at security forces in the western city of Andimeshk.

One of those killed was named as Morteza Ebrahimi, a Revolutionary Guards commander and father of a newborn child, while the others were members of the Basij militia, a pro-regime volunteer force.

It is the worst violence since at least 25 lives were lost in protests over economic hardship that started in Iran's second city Mashhad in December 2017 before spreading to other urban centres.

Netblocks, a website that monitors global net shutdowns, said internet connectivity in Iran was at 4% today compared with normal levels.

Iran announced the decision to impose petrol price hikes and rationing at midnight on Thursday, saying it was aimed at helping the needy.

The US has condemned Iran for using "lethal force" against the demonstrators.

Iran hit back, criticising Secretary of State Mike Pompeo after he tweeted "the United States is with you" in response to the demonstrations.

Iran's judiciary spokesman, Gholamhossein Esmaili, warned the authorities would deal firmly with those who endanger security and carry out arson attacks.

He also called on citizens to inform on "seditionists" who have committed acts of violence.

Officials say some of those arrested have confessed to being trained inside and outside Iran and having "received money" to set fire to public buildings.