The Kurdish administration in northern Syria has announced a deal with the Damascus government on a Syrian troop deployment near the border with Turkey to confront Ankara's offensive.

"In order to prevent and confront this aggression, an agreement has been reached with the Syrian government... so that the Syrian army can deploy along the Syrian-Turkish border to assist the Syrian Democratic Forces (SDF)," the Kurdish administration said in a statement on its Facebook page.

In their statement the Kurds said that the agreement struck with the Damascus government "paves the way to liberate the rest of the Syrian cities occupied by the Turkish army such as Afrin", a majority Kurdish enclave in the northwest.

Earlier today Turkish forces and their proxies pushed deeper into Syria, on the fifth day of the offensive, as Washington announced it was withdrawing its 1,000 troops from the country's north. 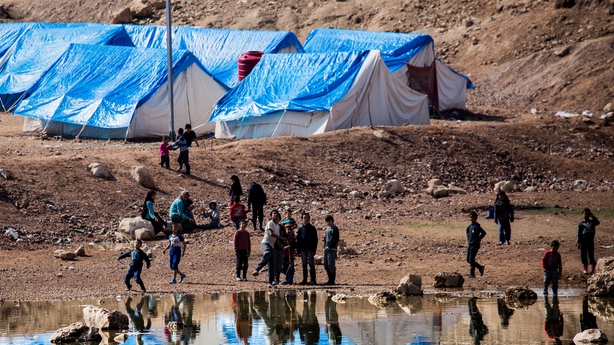 Meanwhile, over 785 people - mainly women affiliated with so-called Islamic State and their children - have escaped from the Ain Issa camp guarded by Kurdish-led forces in northern Syria.

Kurdish authorities said the military assault led by Turkey and its mercenaries was taking place near the camp, which houses thousands of people from families affiliated with IS.

Ain Issa is the camp where Irish woman Lisa Smith and her daughter have been living in Syria.

In an apparent reference to Turkish-backed Syrian rebels, the administration said in a statement that "mercenaries" had attacked the camp where "Daesh elements" - a reference to IS - in turn attacked camp guards and opened the gates.

"The brutal military assault led by Turkey and its mercenaries is now taking place near a camp in Ain Issa, where there are thousands (of people) from families of IS," the Kurdish administration said in a statement.

"Some were able to escape after bombardments that targeted" the camp, the statement added.

Turkey launched its offensive on Wednesday to push Kurdish-led forces away from the northeastern border area of war-torn Syria.

Kurdish authorities have repeated warnings that the fighting could facilitate an IS resurgence, saying security instability could allow IS to free thousands of jihadists and their families held in prisons and displacement camps in Kurdish-held territory.

Some 12,000 IS fighters - Syrians, Iraqis as well as foreigners from 54 countries - are detained in Kurdish prisons, according to their official statistics.

The Kurdish-led Syrian Democratic Forces (SDF), who control territory in northern Syria, were the main partner on the ground in the US-led campaign against IS.

Over 130,000 displaced as a result of Turkish offensive

Separately, the UN has said that Turkey's deadly assault on Kurdish positions has forced 130,000 people to flee their homes, adding it was preparing for that figure to more than triple.

"We have moved into a planning scenario where up to 400,000 people could be displaced within and across the affected areas," Jens Laerke, a spokesman for the UN humanitarian agency OCHA said, adding that these people would be "in need of assistance and protection."

The UN had said on Friday that some 100,000 people had been forced to flee their homes since the beginning of Turkey's military incursion on Wednesday, after US President Donald Trump ordered American troops to pull back from the border.

But by this morning it warned of further displacements from rural areas around Tell Abiad and Ras al-Ain with latest estimates "surpassing 130,000 people".

"Exact numbers cannot yet be ascertained," the agency said in a updated assessment document.

Most of the displaced had reached relatives or host communities, but growing numbers were arriving at collective shelters, including in schools.

The UN warned of the impact of any further escalation of Turkey's offensive or of sudden shifts in control over territory.

"Concerns remain grave around the risks facing thousands of vulnerable displaced persons, including women and children in various (displacement) camps," it said, pointing to Al-Hol, a camp holding relatives of IS suspects that lies outside the area targeted by Turkey.

The UN said that there were many other humanitarian consequences to the military assault, which is being conducted on multiple fronts along the border.

It also voiced concern for the safety of the staff of the 113 UN and other international aid organisations operating in the area, and had cut international staff numbers to 200 from normal levels of 384.