Almost 1,800 additional gardaí will be deployed to frontline duties as part of plans to restructure An Garda Síochána.

Gardaí said this would be achieved by recruiting more gardaí and more civilian staff between now and 2021, as well as redeploying existing gardaí.

The force said it will continue to remove what is described as "non-core duties", such as the immigration processing and court prosecutions.

The new Operating Model for An Garda Síochána, announced by Commissioner Drew Harris, is thought to be the biggest restructuring of the force in modern times.

An Garda Síochána says that there will be an increasing number of community policing teams.

It also says that there will be a reduction in administrative structures and the community policing teams will be working with communities to identify and tackle problem crimes in their area.

Assistant Commissioner Mick Finn said the changes are designed to deal with the changes in Irish society, including the diversity of communities, the nature of crime and changes in the garda workforce.

He said there will be an improvement in garda technical capabilities to tackle cyber crime, with 50 gardaí currently studying for a postgraduate qualification in economic crime.

This is designed to release more gardaí to frontline duties and deliver a more localised service to communities.

Gardaí said it would improve structures, processes, service and governance, as well as its operational impact.

It is understood the reforms will take place using existing resources and that the plan aims for those changes to take effect over the next three years. 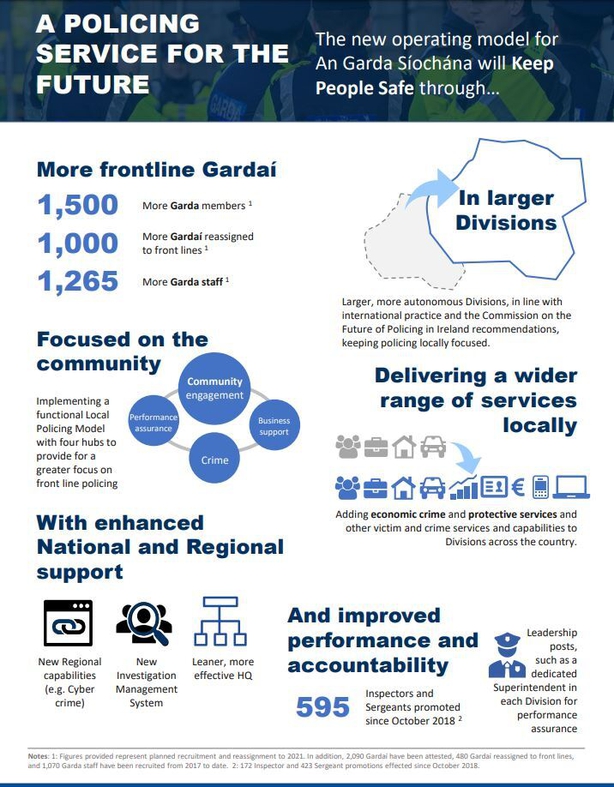 Minister for Justice and Equality Charlie Flanagan welcomed Mr Harris' plans and said the big difference will be "the availability and visibility of An Garda Síochána", particularly on the frontline.

Speaking on RTÉ's Drivetime, he said there is a record investment of €1.76bn in the force to allow the recruitment the plan envisages.

However, he said the figures has gone from 800 new members to 600, with 200 further civilian employees.

Mr Flanagan said there are around 564 garda stations and he does not envisage any of them closing.

He said that one of the biggest differences is that the new divisions will have control of their budget to allocate resources as best suits them.

Mr Flanagan also said: "I don't like the word force ... I don't believe that An Garda Síochána is a force, I believe it's a service and what we will see under this plan is a greater level of service for communities at local level from An Garda Síochána and I as minister need to ensure that the record level of investment continues from Government." 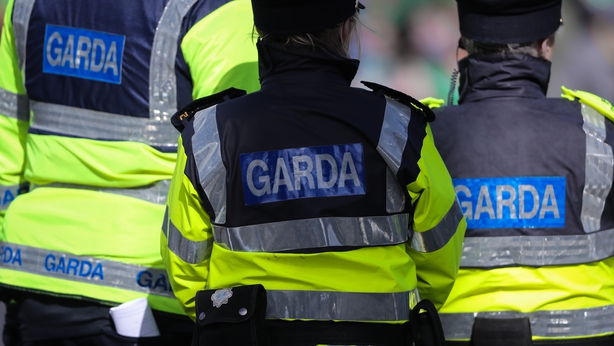 But it appears the Association of Garda Superintendents is unhappy that it was not consulted about the changes and is exploring if the operating model is in conflict with the Public Service Stability Agreement.

General Secretary of the Garda Representative Association (GRA) Pat Ennis said he met Mr Harris yesterday and was assured that the plan was "not necessarily the last word on the issue and that the views of the GRA and others will be considered".

Meanwhile, the Association of Garda Sergeants and Inspectors said the new model raised many questions for its members and there were "many unanswered questions" around funding, manpower and the impact on rural policing.

Speaking on RTÉ's News at One, AGSI Deputy General Secretary Antoinette Cunningham said that while the association welcomes news of the 150 new sergeants and 75 more inspectors in the force, it is not seeing an increase in the "overall strength of the force".

The Road Safety Authority has raised concerns in relation to the roads policing function within the new structure and the implications for road safety.

In a statement the RSA said it views the proposed restructuring "as effectively downgrading road safety within the policing function as its omits Roads Policing as one of the four key focus areas called out at an operational level".

The RSA said it "firmly believes that Roads Policing should be given the same prioritisation as the four functional areas identified in the plan released today." 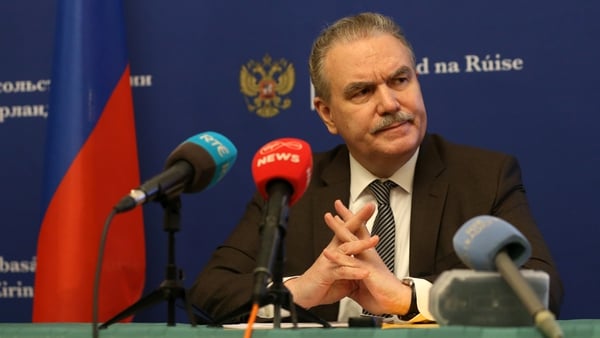