Israeli police and Palestinian worshippers have clashed at a flashpoint Jerusalem holy site as overlapping Jewish and Muslim holidays led to tensions there.

Separately on the Gaza border, a Palestinian shot at Israeli soldiers, who returned fire and killed him in the third such incident in recent days, the army and Hamas's health ministry said.

Police said four officers were wounded as Palestinian protesters threw stones and other objects at security forces, who responded with what they called riot-dispersal means, without providing details.

Sunday marked the start of the Muslim Eid al-Adha holiday and thousands of Palestinians prayed at the Al-Aqsa mosque.

It coincided with the Jewish Tisha B'av holiday, which typically sees an increase in visits by Jewish religious nationalists to the holy site.

In a bid to ease tensions, police initially barred Jewish visits to the site on Sunday but Muslim worshippers still feared they would be allowed in and protested there. The clashes with police broke out afterward. 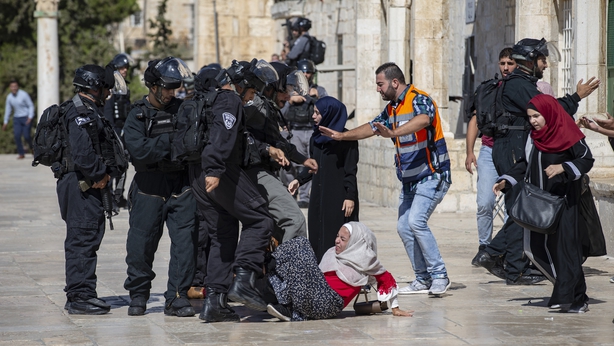 After relative calm returned and following criticism from Israeli far-right politicians, police then opened the site to Jewish visits, sparking another round of clashes.

Palestinian worshippers blocked from entering after the clashes gathered outside and chanted "Allahu Akbar!" (God is greatest) and "With my soul and my blood, I will defend Al-Aqsa."

"It's our mosque, it's our Eid," said Assisa Abu Sneineh, 32, adding she was there when the clashes erupted.

"All of a sudden (security forces) arrived and began to hit and fire sound grenades."

The compound, which includes the Al-Aqsa mosque and the Dome of the Rock, is one of the most sensitive sites in the Israeli-Palestinian conflict.

It is the third-holiest site in Islam and the most sacred for Jews, who revere it as the location of the two biblical-era temples.

Tisha B'av commemorates the destruction of the two temples.

The site is located in east Jerusalem, occupied by Israel in the 1967 Six-Day War and later annexed in a move never recognised by the international community.

Jews are allowed to visit but not pray there to avoid provoking tensions.

A potent symbol of Palestinian national identity, it is the scene of regular clashes between Palestinian worshippers and Israeli police.

Palestinians fear Israelis will seek to exert further control over the site.

Sunday's incidents come only weeks ahead of Israel's 17 September elections, and Prime Minister Benjamin Netanyahu is widely seen as wanting to maintain calm. 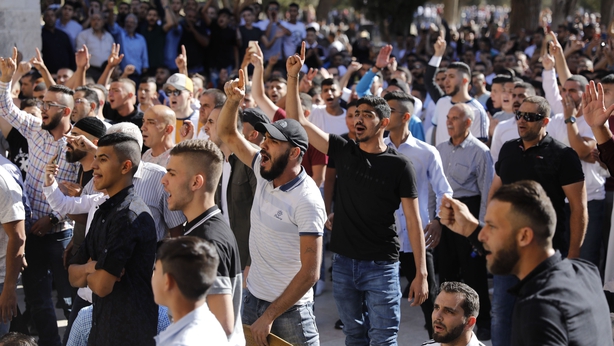 But he also faced pressure from Israeli far-right politicians who form part of his governing coalition to open the holy site to Jewish visits.

The separate incident on the Gaza border followed two similar ones since the start of the month.

On Saturday, the Israeli army said its troops shot dead four heavily armed Palestinians on the Gaza border, adding one had managed to cross and throw a grenade at soldiers.

Earlier on 1 August, a Palestinian seeking to avenge his brother's death by Israeli fire entered Israel from Gaza and opened fire on soldiers, the army said.

Three Israeli soldiers were wounded and the Palestinian was killed, the army said.

Regular protests and clashes erupted along the border of the blockaded Gaza Strip in March 2018.

At least 302 Palestinians have been killed by Israeli fire in Gaza or the border area since then, the majority during the demonstrations and clashes.

Seven Israelis have also been killed in Gaza-related violence.

The protests have declined in intensity in recent months following a UN and Egyptian-brokered truce under which Israel agreed to ease aspects of its blockade in return for calm.

Israel and Palestinian militants in Gaza, ruled by Islamist movement Hamas, have fought three wars since 2008.