At least 40 prisoners in Brazil were found dead in four jails in the city of Manaus, where a fight between rival prison gangs resulted in 15 dead the day before, authorities have said.

A federal task force is being sent to Manaus in an effort to halt the violence.

Officials had initially put the number of dead at 42, but later revised the number to 40 without explanation.

The prisoners were all believed to have been strangled to death.

A statement from the Amazonas state penitentiary department said authorities had regained control of the four prisons. No other details were provided.

At least 15 inmates were killed at a jail in Manaus on Sunday.

At least 25 of the victims were found in the Antonio Trindade Penal Institute near Manaus, the capital of Amazonas, where all four prisons are located.

The federal government has dispatched reinforcements to boost security in the jails.

An investigation launched into Sunday's mass killing at the Anisio Jobim Penal Complex has been widened to include yesterday's deaths. 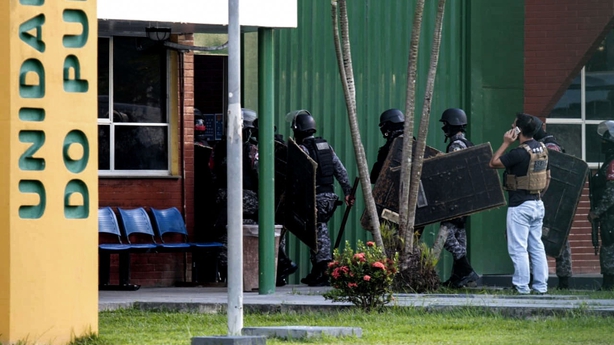 Four of those killed in the latest violence were found at the Anisio Jobim jail, which was also the scene of a prison rebellion that lasted almost 20 hours and left 56 people dead in January 2017.

Another five were killed at the Provisional Detention Centre for Men and six died at the Puraquequara Prison Unit.

Brazil's President Jair Bolsonaro has vowed to regain control of the country's prisons - along with building many more jails.

But the vast majority of jails are administered at the state level. For decades they have been badly overcrowded and out of control of local authorities, essentially serving as recruiting centres for drug gangs.

Brazil has the world's third largest prison population after the United States and China, with 726,712 inmates as of June 2016, according to official statistics.

The population is double the capacity of the nation's jails, which in the same year was estimated to be 368,049 inmates.

The federal government had been expected to add another 115,000 inmates by the end of 2018, Human Rights Watch said in a recent report.

"Overcrowding and understaffing make it impossible for prison authorities to maintain control within many prisons, leaving detainees vulnerable to violence and recruitment into gangs," it said.