DUP leader Arlene Foster has said she hopes a "sensible" Brexit deal can be reached, and called for cool heads in the ongoing negotiations.

Speaking in Dublin following a meeting with Fianna Fáil leader Micheál Martin, Ms Foster said she wants a deal that works for both Northern Ireland and Ireland.

"There's no point in standing back and shouting at each other," she said.

She reiterated that the EU's so-called 'best of both worlds' offer for Northern Ireland in the Brexit negotiations is unacceptable to her.

Ms Foster said that there cannot be any economic barriers between Britain and Northern Ireland, and that nobody wants to see a physical infrastructure on the Irish border.

Mr Martin has said that everybody wants to avoid a no-deal scenario on Brexit and that includes Arlene Foster.

He said he had a "pragmatic discussion" with the DUP leader.

Meanwhile, the Taoiseach Leo Varadkar met with Arlene Foster in Dublin this evening.

A spokesperson for Mr Varadkar said there was a good discussion on issues such as; Brexit, devolution in Northern Ireland and the need to get the power sharing Assembly back up and running.

Both parties said it was vital to maintain north/south cooperation.

They also discussed the cross border congenital heart disease network board and the need for continued co-operation in this area.

Other topics raised included commemorations, transport and tourism co-operation, particularly in relation to Greenways and the Belfast-Dublin rail link. 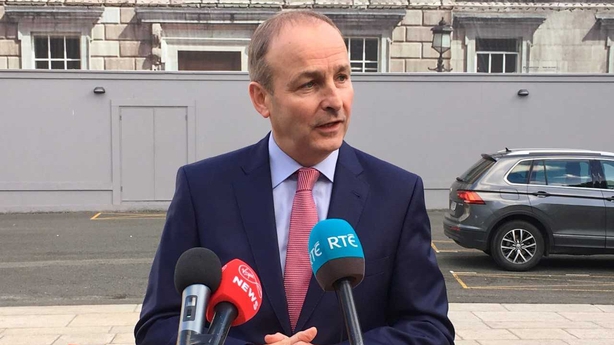 Sammy Wilson told the Belfast Telegraph: "Given the way in which the EU has behaved and the corner they've put Theresa May into, there's no deal which I can see at present which will command a majority in the House of Commons.

"So it’s probably inevitable that we will end up with a no-deal scenario."

Mr Wilson said he believed the current offer from the EU was "far worse" than a no-deal and that it would not secure a majority in Westminster.

Following the meeting a spokesperson for Theresa May's office said the Prime Minister reaffirmed her commitment to no hard border on the island of Ireland and no border in the Irish sea.

"They discussed the need to restore the Northern Ireland Executive, the PM reconfirmed the UK government's commitment to its role in this process and that the Secretary of State for Northern Ireland will be introducing legislation to ensure public services will continue to be delivered," Mrs May's office said in a statement.