Team Ireland have returned home following a successful week at the European Transplant and Dialysis Championships in Italy, bringing home an impressive collection of 54 medals.

The team’s medal haul including more than 11 Gold, 20 silver, and 23 Bronze medals.

The team arrived home to Dublin Airport this afternoon where they were greeted by a large crowd of family and friends.

The championships took place in Cagliari on the island of Sardinia, where Ireland competed against 24 other countries.

The games are a celebration of life and showcase the value of sport and regular physical activity for people on dialysis and transplant recipients. 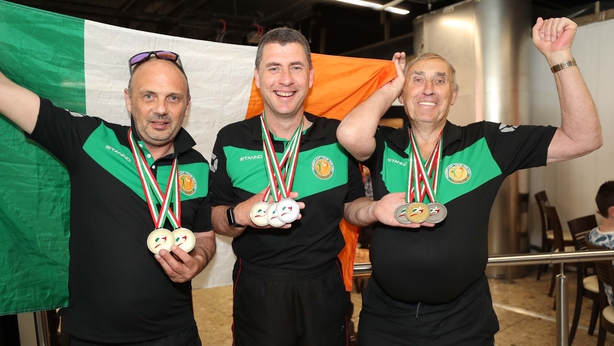 The Irish golf team took home three gold medals, along with two silver, one of which went to John McAleer form Co Antrim, who was the eldest competitor at the games.

John also took home a bronze medal in the Petanque event, as well as receiving a special recognition award at the closing ceremony for his most senior competitor status.

Also at the closing ceremony, Chikoyo White from Dublin was awarded for being the best athlete in the Female Dialysis category. A long term dialysis patient, she won two silver medals in Petanque and 10-pin bowling.

Swimmers Deirdre Faul, Shelia Gregan, Orla Hogan Ryan, and Peter Heffernan saw huge success in the Pool with each of them securing medals.

The total medals haul from the swimming event was three gold, four silver and three bronze.

The youngest member of the team, 31-year-old Rachel Eagleton from Co Meath, won a Silver medal in her Tennis Singles event.

Retired urologist Ron Grainger from Castleknock won gold medals in three events - the 200m sprint, 100m sprint and the Golf Event for his gross score. While Kieran Murray from Donegal, won a Bronze in the 800m race, a Gold medal for Golf, a Silver in the 1500m sprint and Bronze in the 5km walk.

Team manager Colin White praised the team’s achievement, saying he was proud of the spirit the team displayed.

Team Captain Harry Ward also commented on the team spirit that he witnessed, saying "I am very proud of how the team has gelled this year.

"Everyone has supported everyone else and the Team has been like one big family. It's been a truly fantastic week."