North Korea has hailed its summit with the South as a "historic meeting" that paved the way for the start of a new era, after the two leaders pledged to pursue a permanent peace and rid the peninsula of nuclear weapons.

The country’s state news agency has called the inter-Korean summit a turning point for the peninsula, while US President Donald Trump said he would maintain sanctions pressure on Pyongyang ahead of his own unprecedented meeting with Kim Jong-un.

The KCNA news agency separately released the joint statement North Korean leader Kim Jong-un and South Korean President Moon Jae-in presented on Friday after the first summit in more than a decade between the two Koreas.

Mr Kim and Mr Moon had pledged to work for "complete denuclearisation" of the Korean peninsula and agreed on a common goal of a "nuclear-free" peninsula.

"At the talks both sides had a candid and open-hearted exchange of views on the matters of mutual concern including the issues of improving the north-south relations, ensuring peace on the Korean Peninsula and the denuclearisation of the peninsula," KCNA said, reporting that the night wrapped up with a dinner with an "amicable atmosphere overflowing with feelings of blood relatives."

A day after the meeting between Mr Kim and Mr Moon produced dramatic images and a sweeping declaration of goodwill, South Korean media were replaying striking scenes of the two leaders and North Korea's main state newspaper published a multi-page spread with photos from the visit.

Most of the specific commitments outlined in the official declaration focused on inter-Korean relations and did not clear up the question of whether Pyongyang is willing to give up its arsenal of nuclear weapons and ballistic missiles.

In their coverage of the summit, North Korean state media made rare mentions of the denuclearisation discussion, but did not go into specifics, instead highlighting the broad themes of peace, prosperity, and Korean unity. 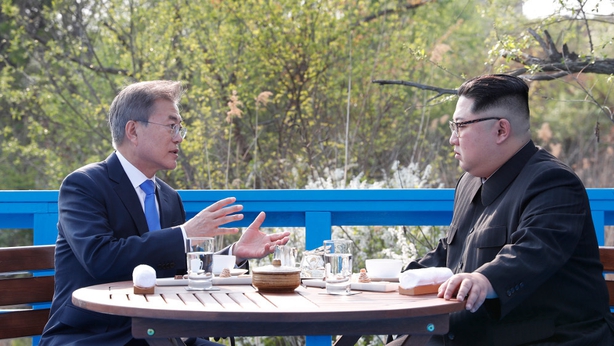 The declaration earned guarded but optimistic praise from world leaders, including Mr Trump, who said that only time would tell, but that he did not think Mr Kim was "playing."

"It's never gone this far. This enthusiasm for them wanting to make a deal ... We are going to hopefully make a deal."

Still, Mr Trump told reporters, he would maintain pressure on North Korea and "not repeat the mistakes of past administrations."

President Trump said that he had spoken with South Korean President Moon Jae-in and preparations for a meeting with North Korea were being set.

"Just had a long and very good talk with President Moon of South Korea. Things are going very well, time and location of meeting with North Korea is being set," Mr Trump said on Twitter.

President Trump added that he had also spoken with Japanese Prime Minister Shinzo Abe to inform him of ongoing negotiations.

An editorial in the official China Daily said denuclearisation could end hostilities between the two sides and "usher in a new era of development" on the peninsula, but noted Friday's declaration lacked a plan for achieving the goal.

"The denuclearisation of the peninsula, written into the Panmunjom Declaration, is only a prospect with no specific plan.

"That is because such specifics can be reached only between the US and North Korea, and South Korea has only limited authority to bargain," it said.