Identical twin boys separated at birth have marked the eighth anniversary of their historic separation with a special play date in Limerick.

Hassan and Hussein Benhaffaf from Cork began the first of three days celebration at the Share a Dream play centre in Limerick.

While the boys' hearts were not joined, they shared the same liver, gut and bladder. And they also each now have a prosthetic leg.

They have made great progress, but have had to endure up to 40 surgical procedures every year since then.

They were playing and having fun at the Share a Dream play centre in Limerick today - one of the few play centres of its type in Europe. Their mother Angie Benhaffaf said while the boys have been doing very well over the past eight years, last year 2017 was possibly the worst year since the separation as they had to undergo several big surgeries.

She said every month one of them was either in hospital in Ireland or the UK.

She said they are still back and forth to  the UK and she has lost count of the number of surgical operations they have had.

Their favourite toys are Woody and Buzz from the film Toy Story, and they have christened their wheelchairs Woody and Buzz. Their dream is to visit Disneyworld, to meet the famous film characters. 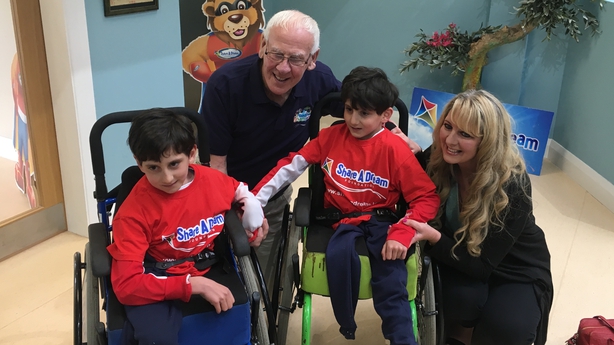 Today, the boys were leaving their prosthetic limbs behind at home in Cork, so they could fully enjoy the fun centre and give them more flexibility to move around the various toy castles, airports, slides supermarket, fire station and post office.

The boys take part in a number of sports, and recently completed their first climbing wall.

Share a Dream founder Shay Kinsella said the fun centre is for children of all abilities, as well as those who have suffered illness, or live with specific conditions, like autism, cystic fibrosis, and cerebral palsy to play together with their siblings friends and parents.

Tomorrow, both Hassan and Hussein will visit Shannon Airport to see the various airport operations and they will return to the play centre in Limerick on Saturday for a party.