Four men have been arrested in Dublin this morning by gardaí investigating the Hutch-Kinahan feud.

Three men were arrested at around 7.30am this morning on Gardiner Street in the north inner city on suspicion of conspiracy to murder.

A fourth man, in his 40s, was arrested by gardaí in a follow-up operation.

Gardaí described the arrests as part of an intelligence-led operation by the Drugs and Organised Crime Bureau into the activities of the two feuding Hutch and Kinahan crime gangs.

This morning, a number of men were under surveillance and were watched moving around a car and a van in a basement carpark at Belmont Apartments off Gardiner Street in Dublin's north inner city

Just after 7.30am, armed officers from the Emergency Response and Armed Support Units moved in.

Three men were arrested at the scene. Two of them are brothers from Finglas.

One is a well-known gunman suspected of involvement in a number of murders in north Dublin, while another is a former British soldier who spent more than ten years in the British army. 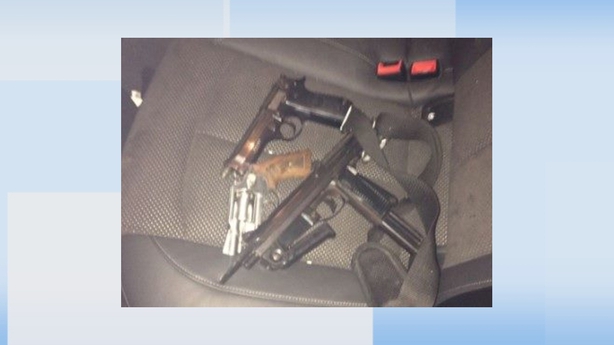 Three firearms - a sub machine gun, a semi-automatic pistol, and a revolver - were also recovered.

Detectives believe the men were acting as "a Kinahan hit team" who were "contracted by the Kinahan crime gang" and were on their way to kill a member of the Hutch family who lives in Dublin's north inner city.

The car and van were also seized.

The Assistant Commissioner in charge of Special Crime Operations, John O'Driscoll, said this morning's operation had saved another life.

The gardaí investigating the feud have made 45 such interventions.

The Assistant Commissioner said the pursuit of those involved is "unrelenting".

The men were arrested for conspiracy to murder and are being detained under anti-gang legislation.

They can be questioned for up to seven days.

In a statement, the Minister for Justice Charlie Flanagan commended the gardaí for their actions in Dublin City centre this morning.

He said today's operation demonstrated the continued determination of the Government and the gardaí to target serious crime and all those involved in it.