Over 230,000 emails and other electronic documents have been obtained by authorities here as part of an investigation into the ticketing industry.

In addition, the Competition and Consumer Protection Commission has confirmed that it has held ten summons hearings where individuals have been questioned under oath.

The CCPC is investigating suspected breaches of consumer law in the ticketing sector.

The CCPC launched its investigation in January last year amid ongoing public and political concerns about the practice of thousands of tickets being offered for re-sale online at prices vastly above face value, often only minutes after official sales commence.

According to the Commission, the investigation is focused on potentially anti-competitive issues like exclusive arrangements, rebates and high service charges by some operators.

The Commission has said it is currently examining all the information gathered to date and is restricted in providing any further information at this time.

In January last year, the Government launched a consultation process to examine options for legislation on ticket touting.

That process concluded in March.

In response to questions from RTÉ’s This Week, the Department of Enterprise, Business and Innovation issued a statement on behalf of Minister Heather Humphreys:

"Since receipt of the submissions to the public consultation on the resale of tickets the Department has engaged in follow-up discussions with sporting bodies, event promoters, consumer bodies, primary ticketing service providers and secondary ticket marketplaces," it said. 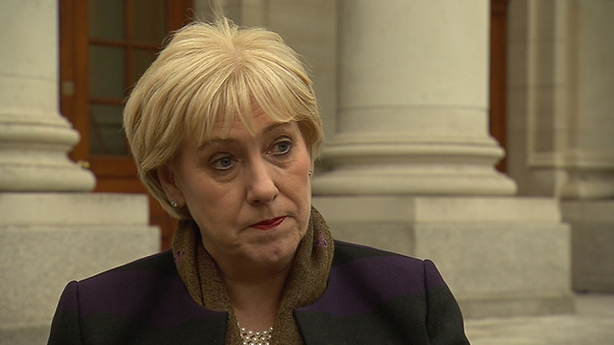 It added: "The Department has also liaised with public authorities in EU and EFTA member states with laws that prohibit or restrict ticket resale on the experience with, and effectiveness of, these laws."

The Department said that Minister Humphreys is "strongly of the view that steps need to be taken to tackle the issue of ticket touting".

It said Ms Humphreys has been "actively engaging with her officials on this matter since taking up her new position in December".

It added that Ms Humphreys is currently considering options available to deal with the issue and that measures to prevent ticket touting are being "brought forward as a matter of priority".

Fine Gael TD Noel Rock and Sinn Féin TD Maurice Quinlivan have said they welcomed the detail of the investigation by the CCPC.

Both TDs have been among the most vocal on ticket touting, and both have tabled bills on the issue.

Speaking on RTÉ’s This Week, Mr Rock said he was glad to see the Commission is taking the matter seriously and he believed that Ms Humphreys is determined to tackle the issue.

He said the Government intends to legislate on the issue.

Mr Quinlivan said his bill has been sent to the Jobs, Enterprise and Innovation Committee and he has put down a priority question to Minister Humphreys this week asking if the Government will support the bill.

He said that his proposals include a cap of 10% on the resale price of tickets and will deal with most of the issues raised.