Minister for Health Simon Harris has described the commencement of the debate on the Eighth Amendment as one which, will in time, be seen as an historic one.

During opening statements on the Report of the Joint Committee on the Eighth Amendment, he told members that he was fully aware of the sensitivities and complexities of this issue.

He said: "I want to acknowledge the deeply held, genuine views on all sides of the House and throughout the country."

Mr Harris paid tribute to the work of the committee, and said he recognised that the recommendations contained in the committee's report represent the views of the majority of members, but that there was not unanimous agreement on them.

"I respect the views of those who dissent from the recommendations but I do believe they are the basis on which we must proceed on this issue," he said.

"Is it acceptable to any of us that women are once again left in a lonely and scary place sending off for a pill to be sent through the post instead of being able to access the medical advice and support they need?

"This is happening in Ireland today. That's a fact. How can we ignore it? How can we consider it alright?"

Mr Harris told the Dáil that he expected to return to Government in the coming weeks with a series of proposals, which he believes can deliver a referendum by the end of May or early June should the Oireachtas facilitate that.

Minister Harris also said it is estimated that at least 170,000 Irish women have travelled to other countries for abortions since 1980 and he gave a breakdown of the numbers of women in each county who travelled to the UK for a termination.

He told the House that this is an issue which, "challenges us to think about what kind of a country we want to be and what kind of a society we are", recalling the Magdalene Laundries, the Mother and Baby homes, and the culture exposed by the Kerry Babies case, as well as the death of Ann Lovett in Granard in 1984.

Fianna Fáil's health spokesperson Billy Kelleher said if Article 40.3.3 prevails, every night four or five women will take abortion pills, and every day ten women will get on planes and fly abroad.

He said Ireland has fundamentally changed since 1983 and women now had an opportunity to put themselves at the heart of this debate.

Mr Kelleher spoke of friends who had a diagnosis of a fatal foetal abnormality and the difficult decision they took to go abroad.

He called on members of the Dáil to lead by example and allow various views to be expressed and said they had to show political leadership by having a respectful debate. 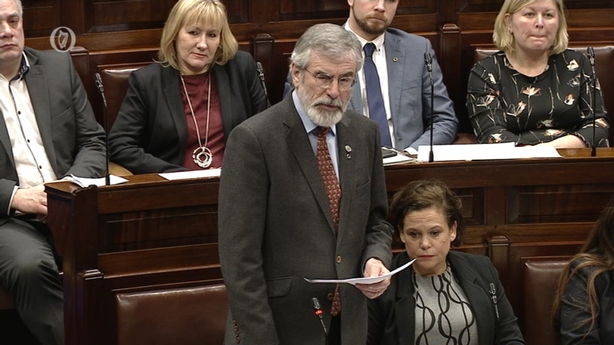 Sinn Féin leader Gerry Adams said abortion is a reality in Ireland, and while he had his own view on abortion, it was for women to make the judgement.

Mr Adams said tolerance had to be the hallmark of the debate and that repealing the Eighth Amendment will correct an historic right, and he hoped it would happen as soon as possible.

The party's deputy leader, Mary Lou McDonald, said she recalled the toxic atmosphere in which the Eighth Amendment was inserted into the Constitution.

She said the abuse of women and indifference to health and bodily integrity was now unacceptable in Irish life.

Labour Party leader Brendan Howlin said his party accepts the committee's report, and would campaign for change with vigour, but respect.

Recalling the 1983 campaign, Mr Howlin said he hoped it would be possible for people to listen, as well as to speak, and to acknowledge difference without vile attack. 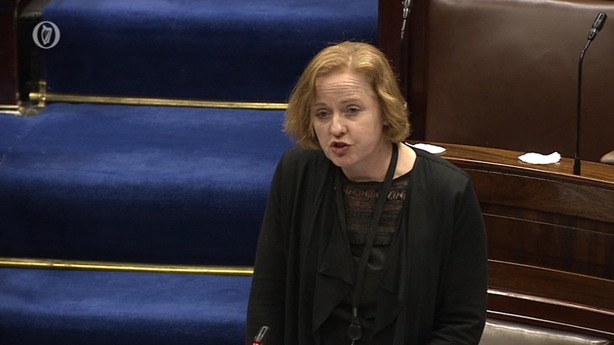 Solidarity-People Before Profit TD Ruth Coppinger warned there would be a revolt if a referendum on repealing the Eighth Amendment was delayed.

She said the tide could not be turned back now, and she urged Minister Harris to clarify a date for the referendum to be held, as well as a timeline for legislation.

Deputy BrÍd Smith of Solidarity-PBP told members that the Eighth Amendment was not protecting unborn children. She said people could either support legal abortion or illegal abortion.

Independent TD Michael Healy Rae told the Dáil that he did not agree with abortion, and was prepared to lose his seat over his views.

"I just don't agree with abortion. I just don't think it's right and nothing will ever change me from that point of view," he told the House.

The Dáil is discussing the recommendations of committee's report on the Eighth Amendment, with the discussion scheduled to continue tomorrow. The proposals are also being discussed by the Seanad.

In the upper house, Independent Senator Rónán Mullen said this is one of the gravest issues ever to be dealt with in the Oireachtas.

He continued his criticism of the Eighth Amendment committee where "there was an atmosphere that was disrespectful of the minority."

He claimed that the committee never got to grips with the issue of whether the Eighth Amendment saved lives.

Fine Gael Senator Catherine Noone, who chaired the committee, said she is proud of the members as they worked well together.

She said that "the committee was made up of a representative group of politicians from these houses. It was not biased at any time, in any way we conducted our business.

The Cabinet has formally agreed to draft a Bill that would allow a referendum on the Eighth Amendment to take place.

Most of the Fianna Fáil members who spoke at a Parliamentary Party meeting this evening expressed opposition to repealing the Eighth Amendment.

Party TDs and Senators spent three hours discussing the all-party Oireachtas committee's report which recomended that the Amendment should be repealed and unrestricted terminations should be allowed up to 12 weeks.

Party leader Micheál Martin said he believed members should allow a referendum to be held. However, significantly, he did not reveal his own beliefs on the issue.

It is understood Mary Butler took issue that the proposal to allow unrestricted terminations up to 12 weeks was proposed by three party members at the committee, and she felt this was not representative of the party view. 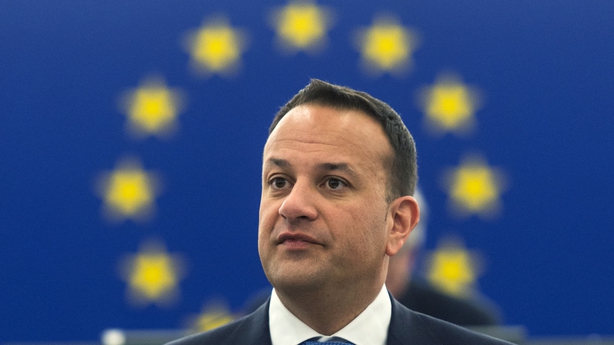 The Taoiseach has previously told the Dáil that he is "very committed" to holding a referendum on the issue in May or June and said the Government was waiting for advice from the Attorney General on the question to be asked in the referendum.

Earlier, Leo Varadkar said he is prepared to provide leadership regarding the planned referendum on whether to remove the Eighth Amendment from the Constitution.

The Eighth Amendment provides for the equal right to life of the mother and the unborn.

Speaking in Strasbourg, Mr Varadkar said: "I think we'll have the wording quite soon, and I don't think it's going to take until March to do that. And I'll be happy to give my opinion at that stage."

He said part of leadership is listening, adding: "I'm paying attention to the debate that's now happening in the Dáil and Seanad. So having listened, I will lead."

Asked if opponents to the all-party Oireachtas Committee's recommendation of abortion being allowed up to 12 weeks should put forward alternatives, the Taoiseach said he believes it would be "very difficult to do at this stage."

He said: "The Government established a process, starting with the Citizens’ Assembly, the all-party Oireachtas committee, and they came up with their conclusions having considered all the facts, heard all the evidence, and I think for anyone to go back to square one and come up with an alternative proposal would be very difficult, but it is of course up to people to do that if they so wish."