Up to 90 vehicles have been destroyed in a fire at a storage compound at Haggardstown, Co Louth.

The fire was reported at around 7.20pm.

The blaze produced large plumes of black smoke, prompting gardaí to advise residents and motorists in the area to keep their windows closed for a time.

Chief Fire Officer in Louth Eamon Woulfe said the cause of the fire is not known.

At one point during the operation, 20 fire fighters were on the scene, with three tenders, a water tanker and a hydraulic platform also deployed.

Mr Woulfe said that the smoke was caused by upholstery in the cars, tyres, fuel in the vehicles and said "there were regular explosions in the early stages".

The compound was used by gardaí to store seized vehicles. 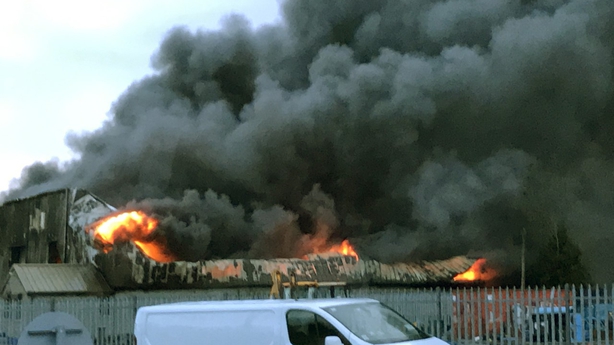 The premises is used by GT recovery but there were no staff on site when the fire broke out.

He added: "Approximately up to 90 vehicles we are told were inside and all were destroyed in the fire.

"It is a difficult fire to get completely out because the roof is after collapsing in on top of the fire. There will be hot spots throughout that building and we expect to be here throughout the night."

A garda spokesman said they are investigating the circumstances of the fire.