At least 39 people were killed and around 50 injured after an express train derailed in southeast India last night in the latest disaster to hit one of the world's largest rail networks.

A number of coaches and the engine of the Jagdalpur-Bhubaneswar express derailed at 11pm local time near Kuneru railway station in Vizianagram district of Andhra Pradesh state.

"The rescue operation is almost over," said a spokesman for East Coast Railway, which has jurisdiction over the area where the derailment occurred.

"Our first priority is to take care of the injured passengers and provide them proper treatment by shifting them to hospitals.

"We are also searching all the coaches to ensure that nobody remains stranded in them," he said.

The reason for the derailment has not been ascertained, he said, adding that they were not ruling out any possibility of foul play and investigations will be conducted.

The incident area is one where Maoist rebels typically operate. 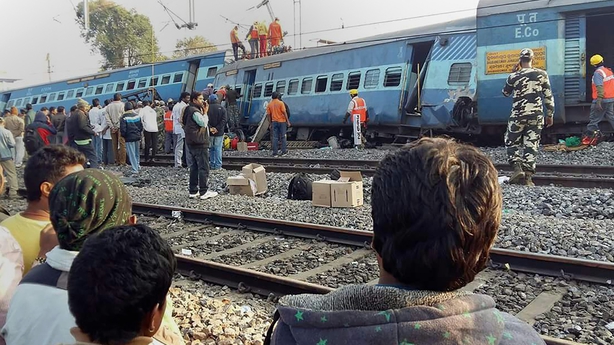 Video footage from the scene showed members of the disaster management team and locals trying to rescue trapped passengers from windows and debris using phones to provide light with the train's bogie wheels tilted off the railway track.

"Nine bogies were derailed of which three have turned and fallen off the track," said a local police superintendent.

"Most of the casualties and deaths are from the three sleeper-class compartments."

Thirteen of the train's 22 coaches were unaffected in the incident.

India's railway network is still the main form of long-distance travel in the vast country, but it is poorly funded and deadly accidents occur relatively frequently.

On Friday, ten coaches of an express train were derailed in western Rajasthan state leaving many passengers with minor injuries.

The latest deadly incident comes two months after 146 people were killed when a passenger train was derailed in Kanpur, northern India, in one of the country's worst rail disasters.