The Department of Housing has said there are enough beds being provided to meet the needs of those who are currently sleeping rough.

The remarks come as a group of campaigners took control of a vacant office building in Dublin with a view to converting it into accommodation for the homeless.

This evening, Mazars, the receivers appointed by NAMA to the Apollo House building, described it as an illegal occupation and said it was not suitable for living accommodation.

The Apollo House building is situated on Tara Street.

The campaigners' group is called 'Home Sweet Home' and includes representatives on the Irish housing network and trade unions. 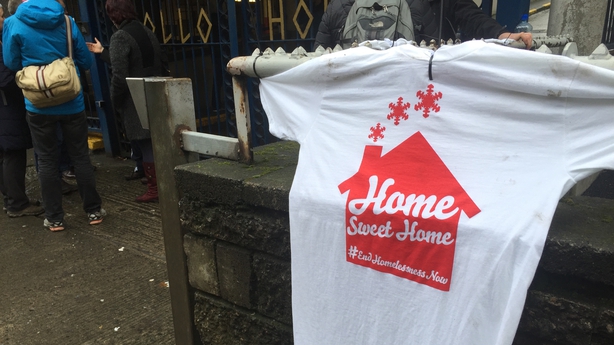 One of the organisers, Rosie Leonard, said the group's aim is to eventually house 30 homeless people on site.

In a statement today, the Department of Housing said the number of new beds available for rough sleepers is now 210. It said there is a bed for everyone sleeping rough - if they choose to avail of the services.

This evening the receiver, Mazars, said the current occupiers are trespassing on private property and are asking them to leave with immediate effect.

They said: "In the circumstances we have no option but to refer the matter to our legal advisers to pursue the appropriate course of action."

Earlier, the CEO of the Dublin Simon Community said he has given the 'Home Sweet Home' volunteers advice on health and safety issues.

Speaking on RTÉ's News at One, Sam McGuinness said he believes gardaí will support whatever is needed there, saying the volunteers are hoping to provide some short-term respite for homeless people.

He said the Dublin Simon Community counted 99 people sleeping rough in the city this morning and the organisers of 'Home Sweet Home' are taking people off the streets.

He said that once the heating is turned on then the building will function to an extent that it will be safer than sleeping in a doorway or "some kind of dumpster".

Mr McGuinness added that he believes it will "certainly be more secure than people sleeping in a doorway, or sleeping in tents in the park".

In the Dáil this afternoon, Fianna Fáil deputy Ann Rabbitte said it is very easy for TDs to leave Leinster House, walk down Grafton Street and pass people "putting in a bed for the night".

Earlier the AAA-PBP Deputy Richard Boyd Barrett called on the Minister to put services in Apollo House to enable the homeless to use it over Christmas.

The Independents4Change TD Mick Wallace told the Dáil that the developer in control of Apollo, "isn't sitting on it" and doesn't have a say on what is happening to it now.

"There's a history behind what's happened still to be told," he said. However he confirmed he approved of the fact that it was being taken over.

Ms Rabbitte said while herself and Mr Boyd Barrett are on "total opposite sides of the fence", she pointed out he asked for heat and electrification in Apollo House for the Christmas.

She said while it put the Minister for Housing on the back foot, she said there are 2,500 children homeless in Dublin.

Ms Rabbitte said if Apollo House gives homeless people comfort over Christmas, she called on Simon Coveney to "let the plumber in".