President Michael D Higgins has begun a State visit to Vietnam with a welcoming ceremony at the Presidential Palace in Hanoi.

The State visit marks 20 years of diplomatic relations between Ireland and Vietnam.

The blossoming southeast Asian state is a Key Partner Country under the Irish Aid programme, with a population touching 90 million and an economy on the rise.

This morning President Higgins met his Vietnamese counterpart Tran Dai Quang for a bilateral meeting and signing ceremony - where trade links between both nations were strengthened. 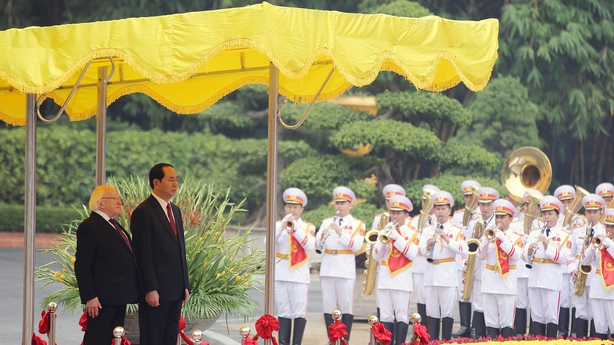 Vietnam, which officially ratified the Paris climate pact last week, is looking to boost energy production to meet mounting demand as its economy and population continue to expand.

The company said the three wind farms will have a combined total capacity of 940 MW.

"In terms of energy needs and requirements, Vietnam is one of the fastest growing markets in Southeast Asia," Chief Operating Officer Andy Kinsella said in a statement.

"Investing in Vietnam is very much aligned with our aim of developing large-scale renewable energy projects in high-growth economies with significant demand for new-build power generation."

The 800 MW Phu Cuong wind farm, worth about $2bn, will be developed in southern Soc Trang province, with the first phase set to be completed in 2018.

The two other wind farms in Binh Thuan province, which will receive $200m, will also see the first phase close in late 2018.

Vietnam mainly relies on coal and hydropower and is seeking to boost renewable energy production from a target of 7% in 2020 to more than 10% by 2030.

The President's visit to Vietnam will also include a wreath laying ceremony and a keynote speech at Vietnam National University, as well as trips to a number of Irish Aid projects in the country.

It will be followed by a short official visit to neighbouring Laos.

President Higgins is accompanied by his wife Sabina Higgins and Minister for Foreign Affairs Charlie Flanagan.

In a statement, Mr Higgins said he hoped the trip will contribute to the "deepening of the true and growing friendship that unites the peoples of Ireland and Vietnam".