The Association of Garda Sergeants and Inspectors has rejected the pay proposals put forward by the Department of Justice in a bid to resolve the ongoing dispute over pay.

The union described the proposals as "inequitable" and said that it is available for talks with coherent proposals.

It comes as Minister for Public Expenditure and Reform Paschal Donohoe said the Lansdowne Road Agreement is crucial and will be in the spirit in dealing with the garda dispute at the Labour Court tomorrow.

He was speaking at a press conference this evening with Minister for Justice Frances Fitzgerald. 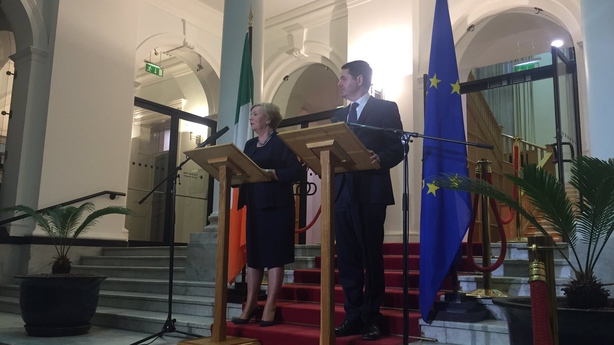 Ms Fitzgerald said the Government wants the garda associations to continue discussions and the Labour Court has issued an invitation for discussion with the Garda Representative Association tomorrow.

She said: "We want to find a solution that is fair to gardaí, to other public sector workers and the community at large.

"We confirmed and the Cabinet of course supported fully the position that this dispute has to be resolved in the context of the overall pay parameters ... in terms of the Lansdowne Agreement.

"Both our hopes would be, and the Cabinet's hope would be, that we would arrive at a situation where the threat of withdrawal from services on Friday would not happen."

The GRA has confirmed that it has received an invitation to attend the Labour Court tomorrow in a bid to avert Friday's strike action.

The GRA, which represents rank-and-file gardaí, has accepted the invitation.

Asked about what kind of disciplinary action gardaí could face the Minister Fitzgerald said under certain acts and regulations, breaches of discipline may arise and other various consequences.

She pointed out that they had taken a solemn oath to protect the public and any garda withdrawal of labour did not have protection of industrial relations mechanisms in terms of being sued for any damages.

However, disciplinary consequences are for another day, she said.

We need your consent to load this rte-player contentWe use rte-player to manage extra content that can set cookies on your device and collect data about your activity. Please review their details and accept them to load the content.Manage Preferences
Leaders of the AGSI met this morning to consider their reaction to the proposals.

Strikes are also planned for the following three Fridays.

Meanwhile, Garda Commissioner Nóirín O'Sullivan has written to every member of the force this afternoon instructing them to turn up for work on Friday when they are due to withdraw their labour for 24 hours in a dispute over pay.

It is understood the move follows a meeting this morning between management of An Garda Síochána, the GRA and the AGSI to discuss contingency arrangements during the period of industrial action.

The letter from Commissioner O'Sullivan informed gardaí that all leave and rest days scheduled for Friday are cancelled, and that they are expected to turn up for work.

Staff are expected to be given around 24 hours to confirm that they will attend for work.

Sources said this information was essential in order for garda management to formulate a contingency plan for Friday's strike.

However, as yet it is unclear if any consequences of non-attendance will be specified.

The potential role of the Army has also not yet been confirmed.

The latest Government pay proposals included incorporating a €4,000 rent allowance into the standard pay scale and a "parade duty" payment worth over €1,400 a year.

However, the 31 Executive Committee of the GRA unanimously rejected the deal proposed by the department and were not prepared to put them to a ballot of members.

Speaking following the talks last night, GRA President Ciarán O'Neill said the association was still open for talks but it is now in the hands of the department to come back to them.

He said the committee felt there was not enough in the deal and the whole package was not acceptable to members.

It is now understood the Labour Court may invite the GRA to talk however the association must await an invite.

As it stands, 12,700 members of the force are set to withdraw labour on Friday and for the remaining three Fridays in November.

The General Secretary of the PDFORRA, the association representing soldiers, sailors and air corps personnel, has said if the Defence Forces are ordered to take part in emergency cover on Friday, they will do so.

However, he envisages that they would be asked to intervene only in relation to crowd control.

Speaking on RTÉ's Today with Sean O'Rourke, Gerry Rooney said apart from a small group in the military police corps, ordinary members of the Defence Forces have no policing skills.

The Government now faces the serious prospect of an all out-strike by most gardaí, with huge implications for the security of the State.

Contingency planning will now have to be stepped-up to police a State where 12,700 gardaí may withdraw their labour.

Informed sources on the Government side insist that what was on offer, costing around €30m, was at the outer limits of affordability under the Lansdowne Road Agreement.

It is hoped a way may be found to get the parties to the Labour Court, though even there, there is no guarantee of success in the current incendiary climate.