Major tensions between the Department of Health and the Health Service Executive over the agency's management of pay and staff levels have been revealed in documents released to RTÉ News, under the Freedom of Information Act.

The HSE has been warned that the staff recruitment moratorium may be reinstated, if the executive breaches a new 2016 Pay and Staffing Agreement.

That agreement reached in July, also released under the FoI request, says that the HSE cannot exceed a ceiling of 106,396 staff by the end of this year - an increase of 2,500 staff on last December's level.

On 2 June, the Department of Health expressed its "very serious concern at the failure of the HSE to submit a complete Pay and Numbers Strategy in a timely fashion", while recruitment continued without sanction.

It also reveals that the HSE was undertaking a "look-back", to see if hospital groups and individual hospitals had funded extra posts, contrary to procedures.

On 14 April, Secretary General of the Department of Health Jim Breslin wrote to HSE Director GeneralTony O' Brien to raise matters of particular concern on outstanding management and reporting requirements.

The partially-redacted letter, criticises the HSE for failing to complete workforce plans in time.

It says that HSE employment levels increased by 611 in February, with an increase of 5,445 since December 2014, "following an exceptional level of recruitment throughout last year".

It notes that the figures show an increase in overtime and absence rates, with only a very modest reduction in agency spending. 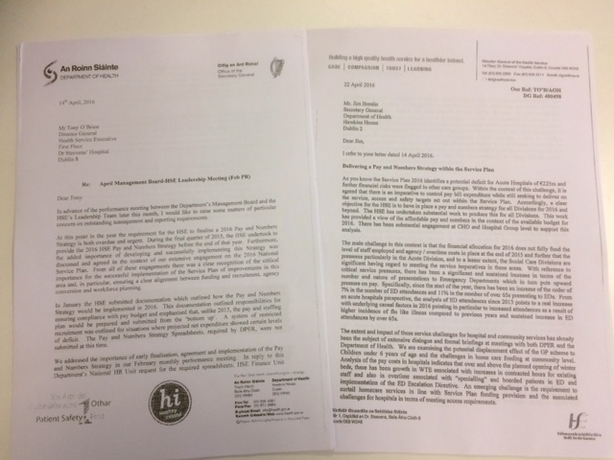 In his response to Mr Breslin on 22 April, Mr O' Brien said the HSE service plan for this year had identified a potential deficit for acute hospitals of €225m and further financial risks were flagged in other areas.

He said the HSE had undertaken substantial work to produce a 2016 Pay and Numbers Strategy, for all of its divisions.

Mr O'Brien warned that the main challenge was that the financial allocation for 2016 did not fully fund the level of staff employed and agency and overtime costs in place at the end of 2015.

He said there was a significant and sustained increase in the number of people presenting at hospital emergency departments "which puts upward pressure on pay".

There was an emerging challenge to "curtail homecare services" in line with the service plan funding.

The letter states: "2015 was also a year in which a regulatory report pointed to significant managerial accountability for past failure to provide for safe staffing levels in certain hospital services, despite the prevailing employment moratoria and funding reductions which were a feature of that time".

The HSE's Pay and Numbers strategy was finally approved in July by Minister for Public Expenditure and Reform Paschal Donohoe and sets binding pay and staffing levels on the HSE for this year.

Under the agreement, the Department of Health is responsible for ensuring the HSE does not break that ceiling.

The document warns that in the event the HSE's pay bill deviates significantly, such that an overrun is considered likely, the staffing moratorium may be reinstated.

The 'Staffing Resource Management Framework/Delegated Sanction for the Department of Health' says the HSE must operate within the 2016 ceiling and that where a post is to be filled, it is expected that the HSE will seek to fill it at the lowest possible grade and ensure appointments are at the minimum of the scale.

In June, the Government agreed an extra allocation of around €500m, to mainly deal with the HSE's projected budget overrun for this year.