NAMA has continued to question the Comptroller and Auditor General's report into the sale of the agency's Northern Ireland portfolio Project Eagle.

Speaking at this morning's meeting of the Dáil's Public Accounts Committee, John Collison, Head of Residential Delivery at NAMA, questioned the manner in which the C&AG's report discounted Project Eagle's gross cash flows.

Project Eagle is the name given to the Northern Ireland property-loans portfolio that NAMA controversially sold in April 2014 to Cerberus, a US company, for about £1.3bn.

The C&AG found that NAMA incurred a potential loss to the taxpayer of £190m on the sale after previous write downs were included. The State's financial watchdog also raised questions with how the loan portfolio was valued and marketed for sale.

In his opening statement, Mr Collison said that by the end of 2013 "the gross cash flows arising from the Eagle loans aggregated to £1,675m".

He continued: "The C&AG's report has discounted these cash flows at a discount rate of 5.5% and has produced a Net Present Value (NPV) of £1,489m.

"However, it should be pointed out that this is not in line with the fair value methodology that was used in preparing information required as part of the end-2012 and end-2013 NAMA Financial Statements, both of which were certified by the C&AG.

"The fair value methodology for the 2012 accounts agreed with the C&AG was based on a discount rate of 10% and, had this fair value discount rate been applied to the Eagle portfolio, the NPV would have been £1,365m.

"This was the prevailing fair value discount rate that applied at the time that the sale of the Eagle portfolio was being considered by NAMA in Q4 of 2013."

When the C&AG published its report, it said there was no indication that NAMA had considered a bulk sale of its Northern Ireland assets until US law firm Brown Rudnick wrote on behalf of US investment fund Pimco in June 2013 offering an exclusive deal.

It found that two of NAMA's valuations of its Northern Ireland loans in late 2013 and early 2014 underestimated their value.

The C&AG report also noted that Pimco withdrew from the bidding war in March 2014 after it told NAMA about a "proposed success fee arrangement" involving Brown Rudnick, a Belfast law firm called Tughans, and a former member of NAMA's Northern Ireland Advisory Committee.

The £7m subsequently discovered in the Isle of Man was in an account controlled by a former managing partner of Tughans, Ian Coulter, who resigned after it was unearthed.

Tughans, which acted as a subcontractor for Cerberus's US lawyers, Brown Rudnick, insisted it was not aware of the transfer and all parties involved in the 2014 transaction have denied wrongdoing. 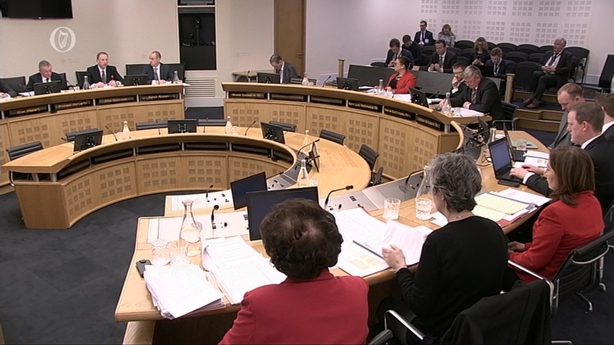 On Pimco, Mr Collison told the committee: "Following the Board's decision to market the portfolio, a single-phase data room was opened in February 2014 and six potential bidders signed Non-Disclosure Agreements permitting them access. As is normal in loan sales, documents were uploaded to the data room throughout the process.

"The only distinction between PIMCO and the other five bidders in the data room was that PIMCO had already seen November 2009 redacted red book valuation reports for the top 55 properties in late 2013. We don't consider that to have been a material advantage."

Mr Collison said there is no single "correct" way for NAMA or other loan sellers to market a loan portfolio.

Explaining the logistics as to how the Project Eagle sale process took place, he said: "Since 2014, bidders have demanded access to a greater volume of information in loan sale data rooms. However, it is important to note that single phase data rooms are still in use and the concept of a two-tier data room, like that used for Project Eagle, remains commonplace.

"I think it is also important to note that there was, and is, no single 'correct' way for NAMA or any other loan seller to market a loan portfolio.

"Marketing approach depends on the size, value and granularity of the portfolio and the size of the potential investor pool."

Senior officials from NAMA have insisted there was no political pressure to sell Project Eagle. Mr Collison said that maximising the return was the number one objective for the agency.

He was responding to Fine Gael Deputy Peter Burke who said Minister for Finance Michael Noonan had referenced the pressure from the ECB, in relation to disposing of the assets.

Mr Collison said the board had met in relation to accelerating disposals, but there was no discussion that Project Eagle had to be sold.

He added that if the bids had come in lower, the board would have had a very difficult decision to make and possibly may not have proceeded with the sale.

The PAC was told that the relationship between NAMA and its Northern Ireland debtors was difficult, with only 15% of debtors in Project Eagle co-operating with the agency at the time of the sale.

Mr Collison said that he was convinced if NAMA did not sell Project Eagle at the time, there would have been a lot more enforcement.

"We were having difficulties with a number of those debtors and it was heading that way.. that would have impaired the value of the portfolio further," he said.

Earlier, the chair of the Public Accounts Committee, Sean Fleming confirmed that winning Project Eagle bidder Cerebus will appear before the committee on 17 November.

The PAC has received an email from Mason Hayes and Curran on behalf of Cerebus confirming the attendance of representatives of Cerebus.

Lazards, the loan sale broker, has also agreed to attend the committee.